Voices of the Dropout Nation in Quotes: The Banality of School Boards 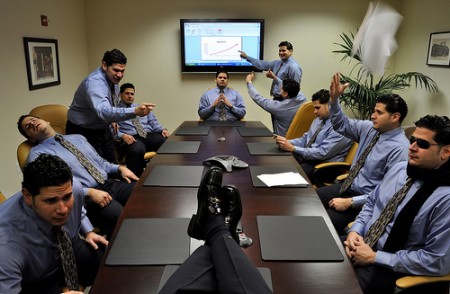 By far the greatest epiphany was the moment I realized my four fellow Board members weren’t bad guys. Considering the entrenched adult interests in education politics, it’s tempting to imagine anyone not “with us” is “against us.” I was confronted not with the caricatures the education-reform blogosphere had primed me to confront… instead, I found myself face-to-face with the stunning banality of enabling. I have found serious and compassionate colleagues that care deeply about students. But the very same nature of boards that seeks to create stability, unity, and strength is also responsible for neutering efforts to make changes; they quietly enable sameness—both the tactic and the end game of status-quo defenders.

As one of the public faces of a district, the pressure as a board member to be a good spokesperson is immense. Home values, enrollment, businesses—they all rely on the success of schools, and so the expectation to put the district’s best foot forward is real…. Another such pressure is the peculiar “collective responsibility” of being a board member—a phrase often repeated, primarily as a way of reminding me I have no individual authority. Both the rhetoric and the statutory reality around the powerlessness of individual members are numbing.

These qualities of board governance are clearly not explicit obstructions to reform, but rather, examples of how such governance tends to favor stay-the-course oneness, and frown upon deviation, which we readily associate with change-agents. No one has ever reminded a member of his/her “collective responsibility,” for example, as a way of encouraging advocacy.

Andrew Blumenfeld, a 20-year-old member of the La Canada, Calif. school board (and a public face of Students for Education Reform), offering reasons why it is so hard to transform education through the traditional district model — and why it must be abandoned for the Hollywood Model of Education that will allow for the creation of schools fit for the futures of the children they are supposed to serve.

It was really, really important for me to struggle with something and not succeed.In a childhood with tons of happy memories, and a decent dollop of adversity mixed in, failing Calc I was the first time I’d ever truly not succeeded at something. And if I hadn’t learned how to get back up, get back on the horse, on my own, I doubt I’d have the level of resolve I now possess as an adult…

I learned how to ask for help.As a shy girl everywhere except the basketball court, speaking up in general was something I had to learn. Having been (thankfully) pretty good at lots of things, I had never acquired the skill of asking for help. And skill it is—one I exercise with some regularity to this day…

Each of these lessons came at some cost—even in a literal sense, because of the expense of repeating a course when my family and I were already taking on significant debt to pay for school. Yet I remain glad—thankful, even—and a better person for having failed that calculus class. While it’s possible Mr. Hacker would suggest other means for students to experience these kinds of developmental milestones, I remain convinced that the struggle is a necessary part of the journey. In mathematics, and in life.

Someone reviewing this evidence who was not already committed to the policy of using multiple measures would obviously conclude that classroom observations were not worth the significant expense and bother.  The conclusion Kane and Gates offer is not driven by “the evidence” but by their preference for a policy that is based on other political and theoretical reasons…

I’m inclined to agree with Kane and Gates that it is better to use multiple measures when evaluating teacher effectiveness.  I just don’t see how “the evidence” does anything to support this view.  The argument for multiple measures is largely theoretical and political.  Theory suggests that a single measure is more subject to manipulation and unwanted distortion in teacher behavior.  And politics suggests that teachers will be more resistant to any system that is based solely on test scores.  These are all fine reasons for supporting multiple measures, we just shouldn’t debase the currency of research by falsely claiming that they are supported by the evidence when the evidence shows no such thing.  They are just confusing evidence and policy preferences justified by considerations that have nothing to do with research. The truth is that MET was a very expensive effort that failed to produce the evidence they wanted, but in Orwellian fashion they declare victory and still say it supports their pre-determined conclusion.

Jay P. Greene, pointing out the flaws in the Bill & Melinda Gates Foundation’s touting of the rather weak “multiple measures” approach to teacher evaluation, a subject of Dropout Nation‘s commentary on the value of student surveys over classroom observations earlier this year.

As a candidate, the telegenic, articulate [Paul] Ryan could play another much-needed role. He could be a great communicator, educating the public about policy challenges and Republican plans to address them.Here I’m thinking not of Ronald Reagan but of a quirkier candidate. Two decades ago, Ross Perot riveted the public with his half-hour prime-time lectures on the dangers of the budget deficit . People still remember his hand-held charts.

The Perot commercials treated the voters as intelligent citizens hungry for knowledge and willing to sit still long enough to absorb it. Perot didn’t offer especially cogent ideas for dealing with the deficit — his main prescription was to get the “best experts” in the room and have them come up with a plan — but he effectively focused attention on the issues, particularly the federal budget. His commercials capped a campaign year in which voters, anxious about recession and restructuring, were unusually engaged with economic policy.

We’re in another anxious period, and voters are again primed to consider serious policy talk. To play up its team’s strengths as numbers guys, countering the self-congratulatory idea of Democrats as the party of intellect, the Romney campaign could make a gutsy move. It could deploy Ryan to talk to the public at length about the looming fiscal crisis, producing a series of long-form, Perot-style videos. Nowadays the Republicans wouldn’t even need to spend money for prime-time television (although that would certainly get attention). They could rely on YouTube.

One video could lay out the problems; another could explain the plan… another could address objections or answer questions sent in by viewers. One video might invite Erskine Bowles and Alan Simpson… to explain their bipartisan budget plans, drawing contrasts among the different approaches and identifying common ground.