Best of Dropout Nation: Steven Brill and the Value of Abandoning the NEA/AFT Model

Dropout Nation Editorial Board
Comments Off on Best of Dropout Nation: Steven Brill and the Value of Abandoning the NEA/AFT Model 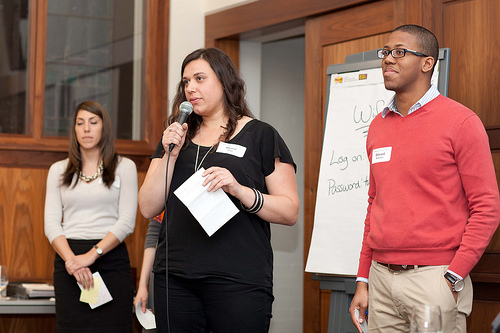 A new generation of teachers deserve a new model of professionalism. (Photo courtesy of the U.S. Department of Education.)

The National Education Association and the American Federation of Teachers certainly remain influential forces on behalf of education traditionalists. But the influence of the nation’s two largest teachers’ union’s have seen their influence decline in the last decade. More importantly, thanks to their continued defense of seniority-based privileges, and other traditionalist policies and practices that have perpetuated cultures of low expectations and abuse, the NEA and AFT have lost credibility as leaders in promoting and improving the professionalism of teaching. The past two weeks alone has seen AFT President Randi Weingarten and other leaders doing incredible damage to the standing of the union model they have long defended.

In this Best of Dropout Nation from August 2011, Editor RiShawn Biddle explains why younger teachers will have to move away from the NEA and AFT model.

Certainly there are some things that hasn’t been said about Class Warfare author Steven Brill’s Wall Street Journal piece declaring what Dropout Nation has always said: That we need more than just good-to-great teachers to spur school reform. One can note that Brill’s fails to consider the effects of the abysmal quality of recruiting and training done by the nation’s university schools of education and how overhauling teacher recruiting and training could help bring in more good-to-great teachers such as those profiled in his piece. Nor does he think about the possibility that teaching may not (and should not) be a lifetime job; the same high-quality teachers are also going to be ambitious and want to do other things in education. So the long-term solution is to build a continuous pipeline of teachers willing to do this work for a time, reward and recognize them for their good-to-great performance, and then help them do great work in the rest of American public education (which suffers from an overall dearth of high-quality talent).

But the most-interesting of Brill’s arguments isn’t those about teaching, or even his ultimate Nixon goes to China” proposition of New York City Mayor Michael Bloomberg hiring American Federation of Teachers President Randi Weingarten for the already ably-filled chancellor spot. It’s his proclamation that the AFT and its sister (and rival) union, the National Education Association, can “help to create” reforms that allow for “ordinary teachers” to do good-to-great work if coaxed in the right direction. It is interesting in light of what has been happening over the past decade — and also the one most-likely to never happen until two unions lose enough members and influence to force that change.

Certainly there have been plenty of attempts to move the NEA and AFT in the school reform direction. Those working on this include centrist Democrat reformers (who have helped weaken NEA and AFT influence, even as they are nervous about efforts by Republicans such as Wisconsin Gov. Scott Walker to do the same), a younger generation of teachers within the union ranks agitating through groups such as Educators4Excellence and NewTLA, and even some NEA and AFT leaders who have pushed for relatively moderate versions of school reform. These efforts, along with the defeats the two unions have suffered in the past two years alone thanks in part to the federal Race to the Top initiative, have forced them to the belatedly modify some of their stances on a smattering of matters, notably using student test score data in evaluating teacher performance. But the fact that it took strong reform measures to make the NEA and AFT budge a little pretty much proves that simply coaxing the two unions alone won’t work.

One reason why is because the NEA and AFT are looking after the interests of their most-influential of their rank-and-file base: Baby Boomers each of whom average a salary of at least $54,400 a year (and more if they have advanced degrees), near-lifetime employment, defined-benefit pensions that can pay out as much as $2 million over a lifetime, and nearly-free healthcare both during working careers and into retirement. Efforts by reformers along with reform-minded (and, in many cases, budget-conscious) governors to make it harder to attain tenure or abolish near-lifetime employment altogether, along with moves to subject teachers to performance-based evaluations, means that they would lose the benefits for which they have long worked. While groups of younger teachers such as those represented by Educators4Excellence are winning some internal battles, the reality is that Baby Boomers are still in clear control of union activity — and will do what they can to preserve their interests.

The second reason lies with the fact that there are still few organizations that can match the NEA and AFT in generating campaign donations and bodies for campaigning. School reformers have succeeded largely because of their work with state and federal policymakers, as well as winning the hearts and minds of families in urban communities. But while some school reformers, notably Eva Moskowitz, Geoffrey Canada and Steve Barr, have done a fine job of working with the grassroots, most of their colleagues — especially those in the Beltway crowd — have blundered in the area of political mobilization.

The final reason? The NEA and AFT continue to cling to an old-school model of employee-management relations that was never really a fit for the kind of work teachers do in the first place, and definitely not workable in an age in which teacher performance can be measured, quantified and rewarded accordingly. The concept of unionism first embraced by the AFT (and later accepted, belatedly, by the NEA) was borrowed from the old industrial union model, which, like the old school assembly line, cotton mills and shirtwaist factories, was based on the idea that employees are little more than mules who can only perform singular tasks ad nauseam. Given that managers, who embraced that idea even before Frederick Taylor began elaborating on it with falsified time and motion studies, didn’t feel obligated to do more than simply work those employees like farm animals (and put them in sweatshop conditions that wouldn’t even be fit for horses), unions fought rightly and successfully to make lives easier. They secured near-lifetime employment and pay scales based on seniority, and defined-benefit pensions that made sense at a time when the average lifespan after retirement was short and generally miserable.

Teaching was never as bad as factory work. But the concerns faced by the mostly-female teaching corps at that time — that they were never paid accordingly for their performance, that their performance couldn’t be measured in any way, that they could be easily fired for just getting pregnant, and couldn’t count on a secure retirement — were definitely realities. This is why the AFT and the NEA fought successfully for near-lifetime employment through tenure, degree- and seniority-based pay scales, and seniority-based privileges that currently make up traditional teacher compensation. And it is why the two unions have worked so hard to make school districts servile to their demands.

Certainly, as Michael Barone noted earlier this year in his piece on public-sector unions, the industrial labor model of employee-manager relations no longer applies in the modern world. And it most-certainly doesn’t apply to education. Thanks to value-added assessment and standardized testing, the success of teachers in improving student achievement can be easily measured; two decades of studies have proven that value-added stands up to scrutiny. The overwhelming evidence that traditional teacher compensation is ineffective in spurring student achievement, and worthless in attracting aspiring teacher to — and keeping them in — the profession proves the uselessness of the NEA-AFT model. But the two unions continue to embrace this model because it is the source of their influence and financial sustenance.

Because of these three reasons, it will be difficult for reformers, especially younger teachers within the NEA and AFT ranks, to push the unions in the right direction. Even though Weingarten’s triangulation strategy has fallen apart, the effort — along with the AFT’s historical idiosyncrasies, means that it is more-likely to go further with reform than its sister union. The NEA’s origins as a professional association could mean that it will return to those roots if its members are willing to ditch old-school unionism. But again, this will be difficult. And this likely means that they must look outside of the unions for change.

Younger teachers may have to walk away from the NEA and AFT, and start new professional associations that embrace the skilled tradesman model of the pre-Industrial Revolution era at the heart of the medical and legal professions, and increasingly used today in the private sector. Such groups can serve as counterweights — and alternative voices — to the current model of teachers’ unions. They could even step in the place of school districts by offering professional development to its members, championing teachers to start their own schools and programs to address the education crisis, and launching alternative teacher training programs similar to those offered by Teach For America and Urban Teacher Residency United.

The emergence of Parent Power groups which, as Dropout Nation reported earlier this month, the AFT and NEA both consider to be threats, will also be key. Parents unions, in particular, may end up turning the teachers’ union model on its head, finally gathering families into organized groups who can go toe-to-toe with NEA and AFT affiliates in every arena. It will also end the penchant among NEA and AFT leaders to behave arrogantly and condescendingly towards families — especially those from poor and minority backgrounds — acting as if they are to only be (barely) seen and never heard.

And finally, the expansion of school choice, along with the development of online and blended learning, can substantially force the NEA and AFT into the reform direction. The former will allow families to leave failure factories and mills of mediocrity, reducing the footprint of the traditional districts that teachers’ union affiliates have under their thumb. The latter will allow for even more students to choose alternative learning methods and new schools that are outside NEA and AFT influence.

Brill is right that the NEA and AFT need to embrace school reform in full. But coaxing won’t be enough. They may only fully back reform once they have suffered more losses.

Suspending Kids into Despair: A High Cost of Systemic Failure