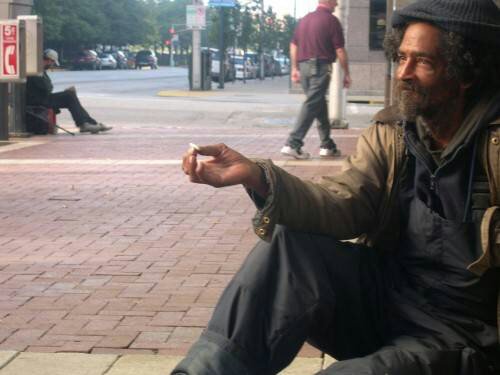 When we talk about the reform of American public education, we focus largely on helping young men and women gain the high-quality teaching comprehensive college-preparatory curricula, and cultures of genius they need to be able to write their own stories. But school reform isn’t just helping our children get a strong start in life as productive adults. It is also about keeping them from falling into the economic and social abyss that imprisons so many adults which is at the heart of the decay of our nation’s urban, rural, and suburban communities.

I am always reminded of this each day when I go to my own personal Web site and look at the photo above. It is of a homeless man in Indianapolis named Raymond, who I interviewed (along with others who lived with him on the streets of the Circle City) back in 2006, when I was an Indianapolis Star editorial writer. Long before I shot this photo, I would pass by Raymond every day as he sat next door to the CVS pharmacy on Illinois and Ohio streets in the city’s downtown. He was one of many homeless men who could be seen around town, and sadly, for most of us, became as much a part of the scenery as the Indiana Statehouse. So when he was a natural person to talk to when I put together a Sunday editorial focused on how to address the underlying causes of Indianapolis’ crime and quality-of-life problems.

Raymond didn’t necessarily tell a lot about himself. Given that I was some interloper writing an editorial, who could blame him? He mentioned that he had live on and off the streets of Indianapolis for years. Among his peers on the streets and those of us who weren’t homeless who paid Raymond any mind, he was considered one of the good guys, someone who bothered no one. Save for lack of a home, Raymond was no different than any of the rest of us out there just trying to make our way through the world — and the same was (and is) true for other homeless men and women out there. And all these men and women were once boys and girls, just like we were, who had dreams of bright futures.

What I didn’t realize at the time I took Raymond’s photo was how much the nation’s education crisis was tied into homelessness. Four out of every ten homeless men and women in Los Angeles were high school dropouts, according to a 2004 study by the Weingart Center. As Angela R. Fertig of the University of Georgia and David Reingold of Indiana University noted in a 2006 national study of homelessness in 21 cities based on data from the federal Fragile Families and Child Wellbeing Study, one out of every two homeless mothers surveyed a year after entering the survey were high school dropouts (as were 40 percent of mothers who were “doubled-up” or sharing residences with other households); while not necessarily a significant factor according to their study, low educational attainment (along with the lack of high-paying employment that allows for men and women to access healthcare and afford housing, especially in high-cost urban locales) played a powerful role in keeping mothers in the kind of economic deprivation that leads to homelessness. In an increasingly global economy in which strong reading, math, and science skills (along with the higher ed credentials that those with such skills can earn) are the keys to social mobility, being a high school dropout increasingly means being homeless (and if also mentally ill, being incarcerated).

Then there is the role that American public education plays each and every day in making life difficult for the one million children coming from homeless households. Just 77 percent of homeless children were regularly enrolled in school, mostly because of Zip Code Education policies that require families to prove residency in a traditional district, something that homeless families cannot possibly provide. This in spite of the federal McKinney-Vento Homeless Assistance Act (part of the No Child Left Behind Act), which requires schools to allow children to attend school in their “school of origin” so long as they remain homeless (and allows for the child to remain in school, whether or not he lives with their parents or “has been temporarily placed elsewhere”). This was made especially clear in the case of Tanya McDowell, the Bridgeport, Conn., mother who will spend five years in prison for the laughable offense of stealing education because she sent her son to a marginally better school in nearby Norwalk; McDowell was still charged even though prosecutors could have decided that the fact that her child did spend time with a babysitter (who allowed McDowell to use her address in order to claim residency). Meanwhile homeless children are more-likely to be subject to the worst American public education offers. As Amy Dworsky, a researcher at the University of Chicago’s Chapin Hall, pointed out in a 2008 study, 22 percent of homeless children in Chicago were labeled as special ed cases, often at twice the rate of students from more-stable homes depending on grade level. The condescension experienced by families with greater levels of affluence is magnified for mothers and fathers struggling to find housing and with getting better education for their kids.

This is a particular problem when one considers that far too many of our schools are mired in cultures of low expectations that fail to nurture young lives. If school climates that allow academic failure, bullying and abuse to fester hurt the lives of kids from stable homes, imagine the impact on homeless kids. This may be one reason why 10 percent of dropouts and other school terminations are attributable to mental health issues, according to a 2008 study by a team led by Rand Corp. behavioral researcher Joshua Breslau. The last thing a child dealing with instability at home needs is a school environment that is even less caring.

The results of American Public Education’s failures, academic and otherwise, can be seen every time we pass by a homeless shelter. It will only get worse if we don’t reform it. The adults of now are the children of yesterday — and as singer Barry White once wrote in a song, the people of tomorrow are the children of today. Allowing more kids to waste away in failing and mediocre schools — and letting them become adults unable to take of themselves, their own kids, and the communities around them — is morally indefensible, economically intolerable, and a travesty that we cannot tolerate as a society.

There are those education traditionalists who argue that schools cannot play a strong role in helping kids avoid homelessness and poverty. This is pure sophistry. One of the most-effective anti-poverty programs of this last and current century is the National School Lunch Program, which has helped empower so many kids (and helped them stay in school) by providing them with hot, nutritious meals that helps them concentrate on learning. The success of schools serving poor kids such as the charters operated by the Knowledge Is Power Program, and Green Dot Public Schools, have also shown the power of high-quality education in changing lives for the better. For youth so used to powerlessness in their home lives, education can help them stand on their own feet and make their way out of despair.

Certainly American public education can’t address all the issues that feed into homelessness. The fact that most homeless men and women suffer from some form of mental illness, and struggle to gain sustained treatment for their problems highlights the critical need for overhauling the community mental health system that has failed as abysmally as the old system of asylums and mental institutions to help generations of the mentally disabled. [Improving mental health treatment would also help young men and women of school-attending age stay on the right path.] The fact that zoning and historical preservation policies in big cities, along with the impact of tax policies such as California’s Proposition 13 (which allows longstanding homeowners to stave off increases in property taxes at the expense of new entrants), have helped inflate the cost of developing and acquiring housing is one that can only be addressed by more-sensible land use policymaking. And given that nearly all mothers who are homeless also have children out of wedlock (and fathers who are absent from the lives of their kids), the need for society to embrace marriage and two-parent households as the norm would also keep more families out of the cycle of homelessness.

Yet at the same time, none of these policies can address the underlying lack of economic and social opportunity that plagues 150 young men and women dropping out of school and into poverty and prison every hour of every day. Nor does it help the additional 33 percent of fourth-graders reading just at basic levels of proficiency (according to the 2011 National Assessment of Educational Progress) who are unlikely to ever gain the learning needed to succeed in traditional colleges, technical schools, or apprenticeships — and thus, also more-likely to be unable to move or stay in the middle class (and be at risk of homelessness). Given the increasing evidence that higher levels of educational attainment are correlated with better physical and mental health in adulthood, it is critical to provide all children with high-quality teachers who care for all children, college-preparatory curricula that can expand their horizons and help them write their owns stories, strong school leaders who build teams of teachers who can help all kids succeed, and cultures of genius that can help them become productive members of society. And ultimately, it means starting and supporting good and great schools from which families can choose (and help shape as lead decision-makers) which can shelter all children from the storms of life.

As U.S. president Calvin Coolidge would say, we must advance the transformation of American public education not to save schools or districts or abysmal teachers and school leaders. We must transform American public education in order to save people. We owe all boys and girls every opportunity to have brighter futures. What we couldn’t do for Raymond and other homeless men and women like him, we must do for our children today.

Suspending Kids into Despair: A High Cost of Systemic Failure