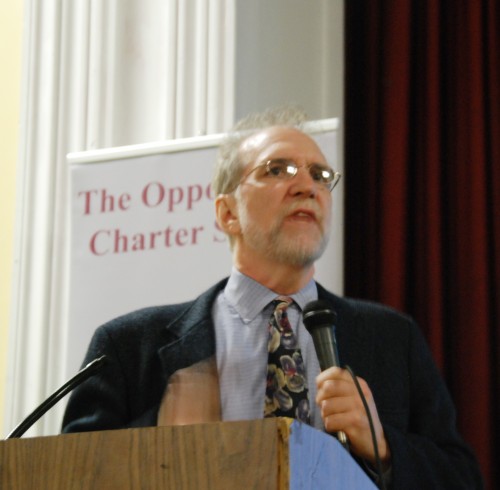 When American Federation of Teachers President Rhonda (Randi) Weingarten took aim at former CNN anchor Campbell Brown last week for noting the union’s penchant for defending teacher dismissal laws and policies that perpetuate cultures of criminal abuse and sexual harassment by those who dishonor the teaching profession as a whole (as well as protect incompetent instructors who also don’t belong in classrooms) — and then tolerated all but the nastiest statements from fellow-travelers — it once again proved that the union prefers to complain about reformers supposedly engaging in uncivil rhetoric than practice it itself.

So it wasn’t exactly shocking to notice that the mouthpiece for the AFT’s New York City affiliate, Leo Casey (who departs the affiliate next month to take over the top spot at an allied branch of the AFT, the Albert Shanker Institute), decided to write a piece on the local’s Edwize site accusing Brown (along with Howard Wolfson, who works for New York City Mayor Michael Bloomberg, and Micah Lasher, who works for the New York branch of Michelle Rhee’s StudentsFirst) of committing “the equivalent of a blood libel” because they dared to point out the AFT affiliate’s essential complicity (and that of the national union) in keeping criminally abusive and harassing teachers on payrolls. For those unfamiliar with religious history, blood libel is the rather nasty accusation leveled by anti-Semitic Christians and others that Jews murder children in order to conduct blood sacrifices during religious ceremonies, which often led to Jews in communities being wrongly tortured and executed for crimes they never committed.

From where Casey sits, the criticism of Brown and others about the unwillingness of the AFT to embrace any reform of the obsolete process for teacher dismissals — including the Big Apple affiliate’s successful opposition to Bloomberg’s effort this year to give the city’s schools chancellor final say over dismissing those alleged and convicted of criminal misconduct (and those engaged in inappropriate behavior with students) — amounts to ” a vicious slander” geared to “chip away at public support for the due process rights” and to “distract” people from the city’s failures to put more effort into firing such teachers. More importantly, as far as Casey is concerned, rightful, honest criticism of the AFT — which collects dues from teachers throughout New York City and the Empire State regardless of whether or not they want to be members — equates to denigration of all teachers.

Such ham-fisted and nasty sophistry from Casey isn’t exactly surprising. Last year, Casey to tossing an Reductio ad Hitlerum-like statement against Steve Brill after the Class Warfare writer accused the AFT and other traditionalists of being “deniers” of the underlying causes of the nation’s education crisis. Casey did it again earlier this year when he essentially proclaimed that Parent Trigger laws (and the Parent Power activists and reformers who support them) are “anti-public education” and “reactionary” because a version of it was touted by the American Legislative Exchange Council, the conservative outfit that also successfully promoted Stand Your Ground laws such as the one on Florida that had complicated the prosecution of the Trayvon Martin murder case. Dropout Nation shredded Casey’s argument (as well as mocked his claim legislators basing their proposed bills off model legislation promoted by both ALEC and the AFT were engaging in something akin to plagiarism).

This time around, Casey’s lack of skill as a propagandist is especially clear. He could have easily earned some points by simply arguing that New York City officials need to step up their own efforts to dismiss criminally abusive and sexually harassing teachers by appealing cases in which arbitrators have ruled against the district. This is a point with which your editor would certainly agree. But then, Casey would also have to admit that one of the reasons why school officials in New York and in other districts don’t bother appealing these and other dismissal efforts is because of the very state laws the AFT defends that effectively make it financially burdensome (around $200,000 a year, according to the New York State School Boards Association) and almost impossible for districts to dismiss teachers who don’t belong in classrooms. This was made clear just last month when the AFT won a court ruling stopping New York City from replacing teachers at 24 dropout factories and failure mills the district was attempting to overhaul.

More importantly, just making that case would also expose the fact that AFT affiliates such as the ones in New York State and the New York City local have been unwilling to do push for overhauling teacher firing processes other than harrumph the national union’s support for the dismissal processes developed by famed lawyer Kenneth Feinberg two years ago. Simply arguing that a contract has “the strongest penalties for sexual misconduct” is meaningless if the process for dismissal makes it overly cumbersome to enforce in practice. This is especially clear when one looks at some of the teachers New York City has tried to dismiss for abusing children. The city was only allowed to suspend one teacher, Edward Cascio, for three months after he accepted pornographic photos from one of his students, and could only fine another teacher, Michael Dalton, $2,000 for tickling and holding his students.

Such obfuscation is typical of Casey, and would be laughable if not for the fact that he has essentially engaged in the kind of offensive statement against Brown and others that Casey himself would find offensive if it were leveled his way. Neither Brown, nor the other reformers mentioned by Casey have said accused all teachers of engaging in such misconduct. What they have rightfully said is that the AFT (along with the National Education Association) aid and abet bad behavior by defending policies processes that make it difficult for school leaders to actually lead their schools — including the ability to hire and fire teachers who are criminally or educationally incompetent — and dishonor the good and great teachers who work hard each and every day to help all of our children get the high-quality education they need and deserve. The fact that Casey even used the term, given that it doesn’t fit the issue at hand, also shows that he is unworthy of serious consideration by anyone.

As I said last year, there is nothing wrong with thoughtfully calling things as they are and engaging in strong advocacy. But once again, Casey (along with Weingarten) has shown that he is more interested in demanding civility from others that he doesn’t practice himself, than in advancing systemic reform that can help children and high-quality teachers alike. This doesn’t reflect well on the AFT itself.

[Check out the update on the Casey affair.]

Best of The Dropout Nation Podcast: The Importance of High Expectations