Why Algebra Matters (and Why Andrew Hacker is Off-Target) 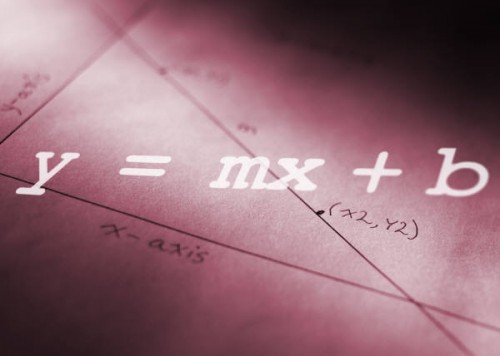 Even as America’s and the world’s economic and social landscape become more knowledge-based, and math and science become even more-integral to career and entrepreneurial success, there are still folks who insist that our children don’t need to master Algebra, trigonometry, and other high-level math skills. The latest came courtesy of the New York Times from Andrew Hacker, an emeritus political science professor at City University of New York’s Queens College, who declares that giving kids strong instruction and curricula in math is unnecessary. Why? From his perspective, “making mathematics mandatory prevents us from discovering and developing young talent”, and is “depleting our pool of brain power”.

Citing the percentages of kids failing math on state tests in Oklahoma and West Virginia , and giving weight to anecdotes from teachers (who apparently don’t take responsibility for their own failures in instruction), Hacker argues that forcing children to take “onerous” Algebra courses means putting them on the path to academic and social failure.  From where he sits, teaching algebra to kids is especially cruel because he doesn’t believe that there is any evidence that it and other high-level mathematics are necessary for economic social success.

The fact that Hacker doesn’t consider that the nation’s education crisis — and the low quality of math instruction and curricula — is the underlying reason why so many kids are failing algebra makes his piece an entirely laughable polemic. Nor does he give any thought to the low quality of math training at the nation’s university schools of education — including evidence that just two out of 63 university school of education elementary math programs surveyed by the National Council of Teacher Quality met or exceeded standards for training math teachers — is a critical factor in the low quality of math instruction, especially in the early grades. Nor has Hacker given any thought to the reality that only one out of 63 elementary math programs surveyed by the U.S. Department of Education have been rated as having “potentially positive” effects on student achievement; the dearth of rigor in math curricula is nearly as abysmal as that in reading.

Meanwhile Hacker’s main thesis — that forcing kids to take algebra means losing talented young minds — falls on its face when one considers that one of the reasons why so many kids are innumerate is because they are also illiterate. The very skills involved in reading (including understanding abstract concepts) are also involved in algebra and other complex mathematics. Those students who are struggling in reading almost always struggle with math (as well as science), especially as they move into sixth grade, when math lessons transition from computation to word problems that require thinking through abstractions. And reading (along with strong background knowledge gained from history and other subjects) is critical is to building the muscle needed to handle math. In short, contrary to Hacker’s conceit, the “brainpower” of these young minds (including the 150 who drop out every hour into poverty and prison) were wasted by American public education’s inability to provide high-quality instruction, curricula, and cultures of genius long before they encountered an algebraic equation.

If anything, kids who take high-level math courses and plenty of them over time are more-likely to graduate from high school and complete higher education. As California State University, Fullerton psychologist Allen W. Gottfried has noted, the earlier children get into math courses and succeed in mastering computations and equations, the more-likely they will take on new challenges in other subjects. Essentially, challenging courses, teachers, and cultures of genius equal children who will succeed in school and in life.

Meanwhile Hacker fails to look closely at what is really happening in the global economy. As Dropout Nation has noted for the past few years, strong math and science skills are critical to our children having long-term success in adulthood (and in helping poor and minority kids emerge into the middle class). The advent of the Internet and the emergence of quantifiable data is making math skills critical to many white-collar professions; marketers and public relations staffers, for example, have to understand the arcane aspects of statistics in order to analyze data on ad campaigns, while reporters and editorialists need stronger math skills as well. The need for strong math skills has become even more-critical in high-paying blue-collar professions. Welders, for example, need to understand trigonometric equations and think through abstractions (along with master computer programming language such as C and Fortran)  in order to ensure that products are shaped properly and fit together upon assembly. Elevator installers and repairmen, who are paid an average of $67,000 annually, must understand electrical and mechanical engineering (which comes from mastering high-level math) for their own jobs.

As the importance of strong math skills continues to grow in the coming decades, the economic prospects for the low-skilled will continue to decline.  As McKinsey & Co. pointed out last month in its study on the global demand for high-skilled labor, the percentage of labor-intensive, or low-skilled assembly and factory line jobs declined by half since the 1970s;  low-skilled jobs as a percentage of all manufacturing positions declined by 29 percent, while the percentage of manufacturing jobs in capital- and knowledge-intensive areas — those requiring strong math, science, and computer language skills — have (and will continue to) increase. As seen in Germany, where nearly all low-skilled manufacturing jobs have gone into the ether, there will be few jobs for those kids who emerge into adulthood without the ability to handle algebraic equations as simple as 5x +2 = 3x + 10. (By the way, x=4.)

Hacker, of course, would respond to this by noting educational psychologist John P. Smith III’s argument that there are some differences between the kind of math activities done in the world of work and what is taught in schools. This is true to a degree. One of the biggest problems in American public education is that so many high-level courses fail to show kids the connections between the math work in classrooms and the real world activities upon which math and science concepts are built. This is why Dropout Nation advocates for efforts such as the Minddrive program in Kansas City, Mo., in which students learn the uses of 3D modeling, trigonometry, and electrical engineering in designing and building cars. At the same time, the reality is that no school can ever fully prepare children for all the challenges of the working world; that’s not within the capacities of any human endeavor. But that doesn’t matter. The reality is that children need strong mastery of the basics — including higher-level math — in order to take on the greater demands in the office and on the factory floor. When kids don’t master algebra while in school, they won’t be able to succeed in the working world outside it.

It would be kind to say that Hacker’s piece is a laughable polemic. But it is more than that. In advocating that most kids just aren’t capable of mastering algebra, Hacker perpetuates the education traditionalist conceit that only some kids are capable of strong, comprehensive, college-preparatory learning (and the cultures of low expectations in dropout factories, failure mills, and warehouses of mediocrity) that is a critical factor in the nation’s education crisis. Given the success of schools such as those run by KIPP, Rocketship Education, and even Catholic diocesan schools in helping kids gain the mastery they need for success in life, Hacker’s statement is not just wrong, but intellectually false and morally despicable.

Meanwhile in arguing that “potential poets and philosophers” (and just about everyone else not taking on the sciences) shouldn’t have to master algebra, Hacker ignores the reality that strong math knowledge (along with literacy and science understanding) is critical to understanding the abstract concepts at the very heart of civilization and society. An adult with a working student with a working understanding of algebra will also be able to understand why the Laffer Curve matters in discussions about tax cuts, and be able to weigh the benefits and consequences of the Affordable Care Act on government, the private sector, and civil society. It also allows for the social mobility that has helped America bend the arc of economic and social history toward progress. A bus driver who understands calculus and trigonometry can move up socially, converse with executives, serve as a leader in his community, and even help his kids make their way into the middle class.

What Hacker should be doing is joining alongside school reformers to advance the transformation of American public education. This includes overhauling how we recruit and train aspiring math and science teachers (including selecting those with strong math competency, talent as entrepreneurial self-starters who can run classrooms on their own and develop innovative approaches to instruction, and empathy and care for all children). It also includes improving how schools teach math in the early grades, which includes providing intense math and reading remediation for struggling students before they reach fourth grade. And it means expanding school choice, Parent Power, and access to data on school performance (the subject of this week’s Dropout Nation Podcast) in order for families to make smart decisions on behalf of their kids; a  a study released this month by a team led by Judith Harackiewicz of the University of Wisconsin-Madison has shown, families who are well-informed about math and science courses can help steer their kids onto the right path.

Those who argue, as Hacker weakly tried to do, that algebra isn’t necessary for lifelong success are essentially articulating foolish thinking that does little to advance the much-needed overhaul of American public education. Hacker’s piece belongs on one of those garbage barges that head out of the Big Apple each day to places unknown — and nowhere else.