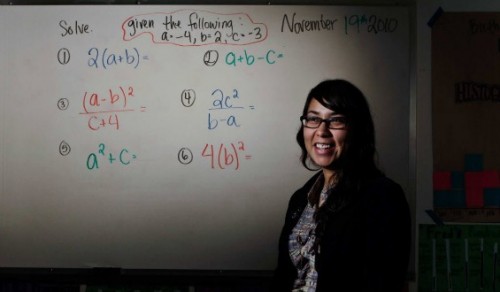 When it comes to how we recruit, train, evaluate, and reward teachers, American public education is in a shambles. Near-lifetime employment rules through tenure keep teachers on the job regardless of whether or not they can improve student achievement. Seniority- and degree-based pay scales, along with defined-benefit pensions fail to reward good-to-great teachers for their performance while lavishing benefits on laggards who should have long ago been shown the door. The fact that traditional teacher compensation only benefits instructors after two decades on the job means that talented new hires have to wait years before getting the full fruits of their labors. Meanwhile quality reverse-seniority layoff rules lead to talented younger teachers being kicked to the curb regardless of their success in helping kids succeed while allowing veterans who are not doing well to stay put. Add in the dysfunction and the obsolete practices within traditional districts, the continued defense of failed policies by National Education Association and American Federation of Teachers affiliates, and the low quality of school leadership, and the consequence of these policies are magnified, creating conditions that do little to help good and great teachers stay on the job.

The results are ultimately borne upon children, especially poor and minority kids in the nation’s big-city failure mills and dropout factories, who are most-likely to get both laggard instructors regardless of time on the job, and are often the first to lose good-to-great teachers to workforce reductions. And taxpayers and families, along with the nation’s economic and social fabric, also bear the brunt.

So Dropout Nation wasn’t shocked by teacher quality reform outfit TNTP’s latest report on how poorly traditional districts are doing in retaining high-quality teachers, especially the top 20 percent of professionals who tend to get the least (in pay, benefits, and recognition) for the best work. Nor were we shocked that 10,000 top-quality teachers working in the nation’s 50-largest traditional districts likely leave the profession every year (and rarely for personal reasons), or that 100,000 laggards manage to retain their jobs in that same period (and, in some cases, are encouraged to stay). The fact that three out of every newly-hired teachers will actually outperform the laggards they replaced — and that 40 percent of  teachers with seven or more years of experience surveyed by TNTP are worse at improving student achievement than new hires in the ranks —  is even more damning of how poorly American public education recruits and manages talent. (So does the fact that secondary students surveyed for TNTP ‘s study by the Bill & Melinda Gates Foundation’s Measures of Effective Teaching project can clearly tell the difference between high-quality and low-quality teaching, proving that our Familiarity Breeds Hypothesis on students and teacher quality.)

The TNTP study also illustrates the problem of school leadership that is nearly as much a culprit as the nation’s ed schools for the low quality of teaching in schools and districts. Only 26 percent of top-performers in four districts studied by TNTP said that school leaders identified teacher leadership opportunities for them, while just 37 percent of them said leaders encouraged them to continue working in their respective schools. The lack of strong school leadership also partly explains why districts do such a poor job of retaining top-flight teachers, on average, retaining just seven out of every eight of them over a two year period (and why they do such a poor job of getting rid of low-performing teachers, with 79 percent of those laggards over that same period). Because so many of these leaders buy into the traditionalist myth that laggards can improve their performance if only they are given support — despite growing evidence that this isn’t so — school leaders end up focusing more energy on helping laggards instead of bolstering and publicly rewarding the success of those who are doing well by the children in their care. As a result, they, along with the laggards (who often hide in plain sight, discouraging good and great work), foster cultures of mediocrity and failure that lead to educational and even criminal abuse.

Again, this isn’t shocking. As Dropout Nation has noted, the unwillingness of many school leaders to embrace the sophisticated use of data in evaluating, rewarding, and even structuring the work of teachers, along with the fact that many states still restrict the use of objective student test score data in teacher performance management, means that more often than not, principals must use unreliable subjective evaluations to determine which instructors should keep their jobs and deserve promotions. But this isn’t just a data and policy problem. After all, most school leaders emerge from the teaching ranks, and this will continue even with efforts such as that of the Broad Foundation to bring experienced managers from other sectors into those jobs. Given the low quality of teachers in the ranks within many districts, there will always the high likelihood of laggards failing upward into principal’s offices. Considering that good-to-great teachers who aren’t interested in school leadership position have no other way of gaining promotions and raises, those talents end up taking on roles that require a different set of competencies than what they may possess.

None of this is helped by either the NEA or AFT, who despite their proclamations and declarations about elevating the teaching profession, support every policy and practice that denigrates it.  Nor have the nation’s ed schools done what needs to be done to improve how it recruits aspiring teachers into their programs, and adequately prepare them to work in classrooms. It would be easier for districts to get rid of laggards if there weren’t so many coming out of ed schools in the first place.

The TNTP study once again makes clear the need to overhaul the entire teacher quality pipeline so that our children can get the good-and-great teachers they deserve — and that those teachers in turn, can work in cultures of genius that reward them for doing stellar work. It’s high time to make it happen.

Why Algebra Matters (and Why Andrew Hacker is Off-Target)