Dropout Nation Editorial Board
Comments Off on Voices of the Dropout Nation: Phillip Jackson on Advancing Black America In the Knowledge-Based Economy 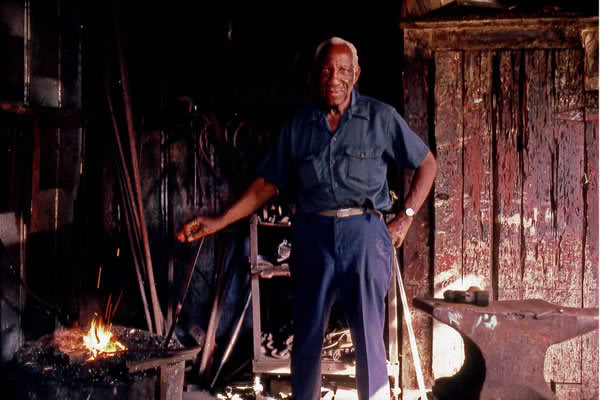 Embracing entrepreneurship, ownership, and high-quality education can help our young men and women become powerful players in the world the way legendary blacksmith Philip Simmons was in his day.

One of the most-important reasons why we must overhaul American public education is because of the effects of low-quality teaching and curricula on poor and minority communities. When only half of all young black, Latino, and Native men graduate from high school — and even fewer gain any form of higher education — in the knowledge-based economy, the neighborhoods in which they live suffer economically and socially. But it isn’t just about woeful schools. The knowledge-based economy has also made it important for everyone to embrace an ownership mentality similar to that of the pre-Industrial Revolution era when being a skilled tradesman, a farmer or a merchant was the key to economic and social success (a model that Booker T. Washington, Oscar Micheaux and others embraced just after the end of the Civil War during Jim Crow segregation). It will take the efforts of everyone, especially in families and at the grassroots, to address the consequences of this education crisis and also address the social ills that are spurred by and feed into the woes of American public education.

In this Voices of the Dropout Nation, Phillip Jackson of the Black Star Project offers some perspective on what black families — and all families — should do beyond addressing the nation’s education crisis, improve economic prospects for our children, and clear out the wastelands that suck life out of our communities and families. Read, consider, and take action.

Recently the U.S. Census Bureau reported that many black people in America are poor by both American and third world standards. The net worth of the average black household declined to a paltry $4,955 per household compared to $110,729 for those of whites, according to the 2010 Census.

This is a story line we in Black America already know all too well.  The Center for Responsible Lending estimates that Black Americans will lose $194 billion in wealth from 2009 through 2012 because of the mortgage meltdown. Additionally, the Center for Economic and Policy Research estimates that blacks will have lost about $142 billion in potential wages and salaries from 2008 through 2012. This $336 billion loss is equivalent to one-third of $1 trillion of combined lost wealth and lost potential-earned income. This means that more blacks are struggling in 2012 with such basics as paying rent or a mortgage, utilities and insurance; obtaining affordable health coverage and access to health care; and buying food and medicine.

The loss of wealth and economic power has been going on for some time. In 2006, Thomas Shapiro, director of the Institute on Assets and Social Policy at Brandeis University, stated that only 26 percent of black families could survive more than three months after a major income interruption. The other 74 percent would be forced to seek government assistance, dip deep into savings, sell assets, file bankruptcy, move in with a friend or relative, or become homeless. By 2012, Black families that might survive a major three-month income interruption may well drop to below 15 percent.

There’s no reason for this. Black Americans generate about $1 trillion a year within the American economy. However, a 2010 report by Target Market News shows that we don’t use our dollars wisely to improve our plight in America. For example, in 2008, some of our collective purchases included $26.9 billion for clothes, $12.9 billion for household furniture and equipment, $31.5 billion for cars and trucks, $17.2 billion for phone service, $4.5 billion for consumer electronics (excluding computers), $3.1 billion for entertainment/leisure and 2.8 billion for alcoholic beverages. Unfortunately, the only category where we showed spending restraint was on books for which we spent only $289 million. We spent more on our fingernails and our hair—$6.6 billion on beauty care—than on books and reading materials.

We must take control of our economic destiny. We as black families cannot wait for the government to save us:

1. Start your own business. Few people acquired wealth working for someone else. By starting your own business, you can hire family, friends, and community members. Additionally, you will build the economy of your community and become a model for what’s possible. Finally, you may be able to pass on a successful business as a family inheritance to your children and grandchildren.

2. Get as much education as you can. Higher levels of academic and technical education readily translate into better employment, higher income, and more wealth. Education begins with you reading to your children as infants, teaching your children to read before they are school age, and encouraging a good deal of on-going reading. Education must become a life-long pursuit! The new hierarchy of human needs after air, water, and food is education. Without a good education, you have few viable, legal options for earning money.

3. Stop renting an apartment. Save enough money to make a down payment on a house. Then buy a house. The largest portion of the net worth of most families is in home equity, not cash assets.

4. Manage your health and your well-being carefully. Watch the quality and quantity of the food you eat and the water you drink. Exercise rigorously and regularly. Choose your physician wisely. Strive to develop physical, emotional and spiritual harmony.

5. Open savings accounts for your children. Teach your children the value of money and how to earn, save, and invest it at an early age. Take personal finance classes so that you will become the best teacher for your child on the issues of money, saving, investing, and credit.

6. Invest your money and your time first in self-improvement by building your skills and your knowledge base. Don’t spend money on cars, clothes, furniture, or frivolous electronics. Learn how to let big companies work for you, through stock ownership, rather than you only working for them. And third, invest your money in the U.S. and global stock markets.

7. Manage your credit carefully and avoid unnecessary debt. Beware of spending beyond your means and consume smartly. Learn to pay cash for what you need or don’t buy it. And forget about things you want and don’t need. Create a household budget that includes such essentials as food, safe living space, and utilities—and live by it. Save for a rainy day. It’s coming!

9. Tithe. Give to your church or to a social cause.

10. Create a will to pass on your accumulated wealth to the next generation. Studies suggest as much as 70 percent of most households’ current wealth was inherited from a previous generation.

Best of Dropout Nation: Gwen Samuel on the Need for Parents to Take Power