Voices of the Dropout Nation in Quotes: The Annihilation of Our Young Men Can’t Continue

RiShawn Biddle
Comments Off on Voices of the Dropout Nation in Quotes: The Annihilation of Our Young Men Can’t Continue 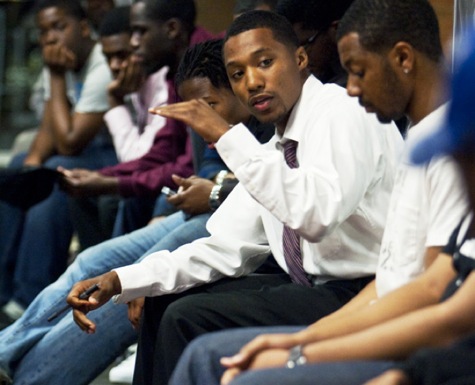 Only 47 percent of black males graduate from high school nationwide and NO fundamental changes to public education have been made to undo this… The categorical annihilation of Black males is underway. No1 is safe from responsibility or repercussions. We must all be ashamed and inspired. Nobody has a right to be neutral about the conditions in today’s public schools. It’s more than academic failure, it’s dangerous!

CNN Commentator and Hartford Principal Dr. Steve Perry decrying the high cost of the nation’s education crisis on the futures of young black men. These words also hold true for all of our sons and nephews.

Students are not only being condemned to life sentences of educational inequity, their caregivers are being sentenced to jail and/or parole for trying to break them out of underperforming schools. Students face the disadvantage of not being prepared for college and career, and learn unequivocally that any attempt to challenge the status quo, and the power structure it represents, will result in police arrest and court action. If, as President Obama has argued, the best possible education is not only the key to opportunity, but also the civil rights issue of our time … Then, tomorrow is today, and with the fierce urgency of now, we must march ahead.

Unai Montes-Irueste, issuing a clarion call on what we must do to stop making high-quality education is “as common as a solar eclipse” — and stop damaging poor and minority children.

Texas high school students can pass most of the state’s new end-of-course exams this year by answering fewer than half the questions correctly, prompting concerns that the initial standards are not tough enough. On the easiest end, freshmen can pass the algebra I and biology exams by getting 20 of 54 questions—37 percent—correct.

Houston Chronicle’s Ericka Mellon, offering a debunking of education traditionalists’ myth of high stakes testing. If anything, we need harder tests and, more importantly, provide kids with high-quality teaching and strong, comprehensive college-prep curricula that challenges and engages their minds, not hand out watered-down tests.

Officials steer so much money into benefits that do little to improve schooling because benefit costs are long-term and largely invisible to taxpayers, while they satisfy the demands of political, influential union leaders. Like sugar subsidies or pet Pentagon pork, this makes benefit giveaways as tempting as catnip to policymakers in Madison or Milwaukee. It’s just too easy for state and local officials to shovel out the goodies, when public employee and their union leaders appreciate it and no one else will notice.

Rick Hess noting another reason why Scott Walker’s victory yesterday was so important. Reformers need to press state officials to be strong school leaders and overhaul policies that do little to help children succeed in school and in life.

Politically Advancing Reform: StudentsFirst Gets It Right in California and Iowa