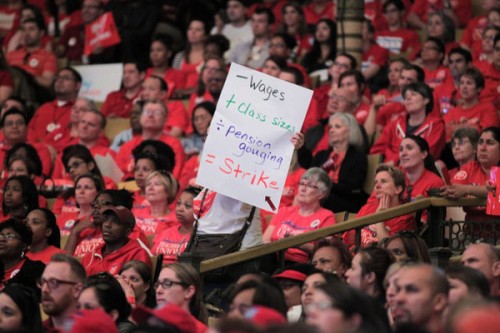 As I mentioned in yesterday’s Dropout Nation commentary, centrist Democrats must face up to the reality that the tactics they are using as part of their reform efforts are in substance no different in the goal of weakening the influence of the National Education Association and American Federation of Teachers than Wisconsin Gov. Scott Walker’s successful abolition of collective bargaining privileges. Two latest bits of news coming out of Chicago and Los Angeles once again makes this clear.

In the Second City, the Illinois affiliate of Democrats for Education Reform is launching an ad campaign targeting the AFT affiliate’s decision to authorize strike action against Chicago’s public schools. The move by the Democrat school reform activist to weigh in on behalf of Chicago Mayor Rahm Emanuel against the AFT affiliate and Karen Lewis, the union’s notoriously-bellicose president, effectively makes clear that centrist Democrat reformers are all for teachers’ unions except when they use their legally-allowed ability to engage in work stoppages. DFER may not be lobbying the Land of Lincoln’s legislature to ban teachers’ union strikes (and get the state to follow along the lines of others, which tend to ban public-sector unions from engaging in work shortages). But it is clear to all, especially the union itself, that DFER has (rightfully) chosen the side of management.

Then there is the Parent Power lawsuit filed against the Los Angeles Unified School District and the AFT affiliate in that district to push for the use of student performance data in teacher evaluations; Dropout Nation has covered this lawsuit since rumblings about it came out last October. The latest move in that suit came yesterday when EdVoice, the organization that is supporting the lawsuit filed by families led by local activist Alice Callaghan, issued a release noting that almost none of the 600 evaluations turned over by L.A. Unified as part of the discovery process met the requirements of the California’s Stull Act, the teacher evaluation law at the heart of the suit. EdVoice is funded by Forbes 400 billionaire (and prominent Democrat donor) Eli Broad’s eponymous foundation; Broad is also backing the lawsuit filed last month by DFER, fellow centrist Democrat Michelle Rhee’s StudentsFirst, and Parent Revolution (whose boss, Ben Austin, is a self-proclaimed union-backing Democrat) against the L.A. Unified and California’s state officials over the shoddy teacher evaluation and performance management practices the state has continued at the behest of the AFT’s and NEA’s Golden State affiliates. If either or both lawsuits succeed (and there’s a good chance of this being reality), it would lead to an erosion of teachers’ union influence over education policy in California; it is already likely to spur similar suits in states where state education leaders have done the bidding of NEA and AFT affiliates in rejecting the use of objective student test score and growth data in teacher evaluations.

From the perspective of an NEA or AFT leader, these efforts by centrist Democrats are no different than the legislative action Walker has undertaken in Wisconsin (as well as by Tennessee’s governor on collective bargaining, and the elimination of near-lifetime employment in Louisiana championed successfully by Gov. Bobby Jindal). In many ways, what the centrist Democrats are doing is even more-threatening to teachers’ union influence.

Until recently, the NEA and AFT have been the most-powerful players in Democratic Party politics, deploying  both their largesse and bodies of rank-and-file members on behalf of Democrat candidates. But Barack Obama’s election four years ago signaled the end of that dominant role that began to diminish in the early 1990s as big-city mayors, urban families, and young urbanites frustrated with the abysmal quality of schools in those locales began embracing systemic reform. Since then, Democrat-controlled legislatures in states such as New Jersey, along with centrist Democrat governors such as Eliot Spitzer in New York and one of his successors, Andrew Cuomo, have passed reforms that have further eroded that power.

Meanwhile NEA and AFT affiliates, and Democrat politicians are starting to question the value of their longstanding alliance. Two years ago, President Obama and the then Democrat-controlled Congress passed the $10 billion Edujobs bill in order to keep NEA and AFT affiliates on their side as they faced a difficult congressional campaign cycle; save for helping Colorado U.S. Sen. Michael Bennet keep his seat, the move did little to help the Democrat cause. And with Obama and Duncan pushing their own reform efforts that also aim to weaken teachers’ union influence (even as they also try to keep them on their side), union leaders wonder where they can go. Given that Republicans on the national level are even less-friendly than Democrats to the NEA’s and AFT’s agenda, the two unions are basically stuck in a marriage that isn’t all that convenient for either side.

It is time for centrist Democrats to effectively admit that the reforms they support are just as aimed toward weakening NEA and AFT influence as those of Walker and his counterparts. This isn’t a bad thing at all. Systemic reform requires eroding the influence of all education traditionalists who continue to embrace policies that do little for the futures of our children and nation.