The Penn State Scandal: A Reminder That We Must Do Better By Our Most-Vulnerable

RiShawn Biddle
Comments Off on The Penn State Scandal: A Reminder That We Must Do Better By Our Most-Vulnerable 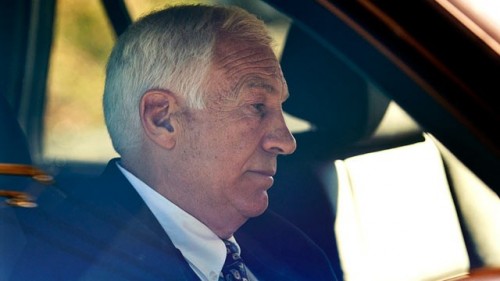 As an outlet focused solely on covering the reform of American public education, Dropout Nation rarely ventures into discussing other issues. But the indictment of former Pennsylvania State University defensive coordinator Jerry Sandusky for allegedly molesting eight young at-risk young men — and revelations that his legendary former boss, Joe Paterno, and other university leaders, essentially ignored this criminal behavior — offers another reminder of how poorly we treat our most-vulnerable children. And our moral obligation to do better by these kids in every way.

If even if a 10th of the allegations are true (and the more-skeptical among us suspect what we don’t know is even worse), there is nothing in this scandal that shouldn’t disgust any man or woman. The fact that Sandusky has likely took advantage of his prime positions as a legendary college football assistant coach and upstanding member of the community to behave in a predatory, abusive, pedophilic manner. The apparently craven unwillingness of Paterno, former athletic director Tim Curley, former vice president Gary Schultz, and now-ousted university president Graham Spanier to report at least one allegation of molestation to the State College police or Centre County sheriff’s office nine years ago, which could have prevented more abuse. The possible complicity of the Second Mile, the organization which Sandusky had founded, in allowing him to continue his allegedly predatory behavior. The evidence that one high school where Sandusky was a volunteer allowed him to meet alone, unsupervised, with Second Mile participants attending classes there, even when some found his behavior to be :controlling” and “needy”. The mishandling of the entire revelations by Penn State until just hours ago, when the university’s board sacked Paterno and Spanier for what can be at best be called conduct unbecoming of leaders of men. And the continued willingness of some Penn State students and alum to defend what can only be kindly called the indefensible.

Sandusky is, of course, innocent until proven guilty. And innocent men have been wrongly accused, even convicted, of crimes. All that said, there are numerous lessons that come from this scandal. That loyalty is more immediate and valuable to many people than morality. That institutional and personal power, kept unchecked, corrupts absolutely. That when organizations fire bad actors, they do so for business reasons and not for the good of society. And that those who we consider to be “good” people are far too willing to let evil take hold wherever it chooses to go.

But the most-important lesson from the Penn State scandal is one that Dropout Nation readers know all too well: We treat our poorest, most-vulnerable children as if they are unworthy of our love and compassion.

Our juvenile justice systems subject far too many kids to abuse and denial of due process. Back in March, former Luzerne County (Pa.) Court of Common Pleas judge Mark Ciavarella was convicted last month on racketeering and bribery charges connected to the convictions of more than 2,500 juvenile offenders. For seven years, Ciavarella and his partner in crime, former presiding judge Michael Conahan, helped funnel $1.3 million a year in taxpayer dollars to cronies operating two private jails by tossing alleged youth offenders — many of whom were first-time offenders charged with misdemeanors such as spraying graffiti, writing prank notes, and truancy — into those jails. In exchange for condemning the lives of these kids — often by handing down guilty verdicts less than two minutes and essentially denying the kids the right to lawyers to boot– the judges collected $2.6 million in what can only be called filthy lucre.

Last year, the U.S. Department of Justice revealed that one out of every three kids held in 13 juvenile jails and prisons were sexually abused by guards, other employees, or fellow inmates. This included 37 percent of kids imprisoned at Maryland’s Backbone Mountain Youth Center, and Indiana’s Pendleton juvenile prison. Nationally, 12 percent of all juvenile prisoners reported molestation and other forms of sexual abuse.

Five years ago in Indianapolis, the city’s juvenile court system was rocked by scandal after allegations surfaced that nine employees at the juvenile jail were sexually abusing youth offenders. The news came after revelations of rampant overcrowding. Prosecutors couldn’t sustain those charges in court. But your editor would reveal that alleged juvenile offenders were often denied attorneys and, in some cases, were being falsely convicted of crimes. For example, one 16-year-old was convicted by one juvenile court magistrate for allegedly molesting her three year-old son and photographing the action; the conviction was overturned after appellate judges found that the photo used to justify the conviction actually showed the young woman kissing her child’s belly. Another 16-year-old was held in juvenile jail for 70 days — 69 days longer than allowed under Indiana state law — without so much as a trial.

America public education aids and abets the abuse with zero-tolerance policies and the overuse of harsh school discipline. Truancy accounted for 38 percent of all status (or illegal only because the child is a minor) cases filed in juvenile court in 2007; they accounted for just 30 percent of all status cases twelve years earlier (schools account for three-quarters of those referrals). In fact, the number of status cases has increased by 31 percent between 1995 and 2007, with courts hearing 35,300 more cases in 2007 than twelve years ago.

Our child welfare and foster care systems are no more humane. Each year, 26,000 kids age out of foster care, often never having either returned to their families or placed into a permanent home where they can get love and care. Even before they leave the system, they have been subject to abuse and neglect by the parents who are supposed to love them, by institutions that are supposed to protect them, and public education systems that subject them to the worst they can offer.

As National Public Radio revealed last month in its system on the negative impact of foster care systems, American Indian kids in South Dakota made up 53 percent of all foster care wards, even though they make up just 13 percent of the state’s children. All but 10 percent of them were placed in foster homes that were run by non-natives, violating federal law originally passed to stop decades of abuse against Indian kids in what were euphemistically called non-reservation boarding schools. The apparent crony capitalism — this, in the form of Children’s Home Society, which reportedly collected more than $50 million in mostly no-bid contracts over seven years from South Dakota’s child welfare system (and was once-run by the state’s current governor, Dennis Daugaard) — makes one wonder how many Native American children were taken from their families in order to generate income. Given that the federal government found 31 other states in violation of federal law six years ago — and disproportionate rates of American Indian kids being seized from families — the problem is more-widespread than anyone realizes.

American public education exacerbates the problem. Just 20 percent of 13-year-old foster care kids attending Chicago’s public schools in 1998 graduated on time five years later, according to a 2004 study by Chapin Hall, lower than the 52 percent five-year graduation rate for all Chicago students based on eighth grade enrollment used by Dropout Nation. These kids are more-likely to be diagnosed as special ed cases: Twenty-six percent of the foster kids attending school in the Los Angeles Unified School District in 2005-2006 were labeled as special ed cases, double the already abysmal 11 percent rate for all L.A. Unified students and 13 percent of all children nationwide that year. In Chicago, 45 percent of sixth-to-eighth grade students in foster care were diagnosed with learning disabilities, three times the rate of the overall student population. Kids in foster care are also more-likely to be subjected to the harshest school discipline, especially when they have also been labeled  learning disabled. In L.A. Unified, the out-of-school suspension rate for foster care students is 12 percent, higher than the eight percent for all students. The fact that foster kids don’t have families who can fight for improving their education means that they often get the worst American public education offers.

The simple reality is that the Penn State scandal, as isolated as it may seem, is just another example of the clear, constant debasement of kids who deserve much better. From dropout factories that toss 1.2 million kids into poverty and prison, to juvenile justice systems that are anything but, the systems we put in place to serve our children are unworthy of them. Some will argue that this scandal has nothing to do with the reform of American public education. That is short-sighted thinking. Our schools are the clearest representation of what we stand for as Americans and as moral human beings. More importantly, it intersects (and in many cases, sustains the troubles) of many of the systems that we have put in place for helping our kids when life hits them with its worst.

Government-run systems, in general, are terrible at dealing with the social ills that can only be solved by strong families and civic society. But we can make sure that those systems don’t make the lives of our kids any harder than they need to be. Reforming all of these systems, including our schools, is the least we owe to all of our children. And every school reformer and education traditionalist should be dedicated to that most important moral goal.

If all of us, especially those who believe in the Creator, want to consider ourselves moral people, then we need to do better by every child, no matter who they are or where they live.

Voices of the Dropout Nation: Sandy Kress on What is at Stake in No Child's Reauthorization