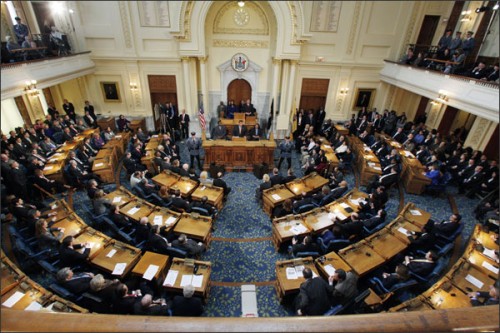 One of the more-fascinating themes in education reform over the past two years has been the successful efforts by the Obama administration and reform-minded governors in states such as New Jersey to allow the expansion of public charter schools. But debates raging in Massachusetts and New Jersey brings up one of the most-important reasons why charters have struggled so long to expand their reach and move beyond the big cities into suburbia: The artificial barriers — including school funding systems — that allow traditional districts and affiliates of the National Education Association and the American Federation of Teachers to keep charters a rarity in the ‘burbs.

In the Bay State, traditional school districts and the AFT’s Massachusetts affiliate are lobbying for passage of a bill that would no longer allow the state to have sole approval over the opening of charters. Instead, authorizing would be done at the local level by the very school boards who also run the traditional school districts with which charters compete. From where traditional districts sit, the fact that the state dares to actually allow families to have any form of choice means that the schools are not “accountable” to districts and thus “undemocratic”. Even though the districts rarely consider the concerns of parents, they have made this a matter of democracy. Declared Brendan Walsh, a Salem, Mass., school board member: ““Are you going to support government by the elected representatives of the voice of the people?”

Meanwhile in the Garden State, legislators have spent the past couple of months considering Assembly Bill 3582, which would require the charter schools to be approved by voters in the neighborhoods that the schools would serve. If the bill is passed (and supporters of the bill can override the likely veto from Gov. Chris Christie), it won’t actually do much to stop the opening of charters in big cities such as Newark (where families have been voting for charters with their feet for some time). But it will likely keep charters from opening in New Jersey’s tony suburbs, which have long opposed any kind of school reform. As one would expect, suburban districts back the plan. But so does groups such as the NEA’s New Jersey affiliate, and the Education Law Center (for whom charters are a threat to both their influence over school funding through the four-decade-old Abbott lawsuits, and their longstanding view that more funding for traditional districts is the only way to ensure that poor and minority children get high-quality education).

As with anything regarding school choice, the issue for suburban districts — and their supporters among NEA and AFT affiliates — has almost nothing to do”democracy” or with local control. Given that states in general account for 48 percent of all school funding (in Massachusetts and New Jersey, it is more like 40 percent), they can shape what public education can look like; since taxpayers from around all states have to fund what happens in each school district, their concerns outstrip those at the local level. As the U.S. Supreme Court made clear a century ago in the Hunter v. Pittsburgh ruling, school districts and other local governments are arms of state governments and thus, have no ability for independent action outside of what state governments decide. Federal education policy has also made that clear; the No Child Left Behind Act actually recognized that reality by requiring states to set proficiency standards, meet Adequate Yearly Progress accountability rules, turn around laggard districts and schools, and expand opportunities for kids to get a high-quality education.

The real issue for suburban districts and their allies is that charters are competition (or as much competition as allowable in American public education) for students and the tax dollars that are collected for each one of them.

Even as big-city districts have been forced to deal with charters , state laws have allowed suburban districts to avoid having them in their back yards. In Missouri, for example, charters can only be opened in St. Louis and Kansas City, allowing suburbia to avoid them; in Tennessee, charters are only allowed to be opened in districts where there are 14,000 or more kids receiving free- and reduced-cost lunch. The fact that in many states, charters have to be authorized by local districts means that those who run them can easily limit their competition by making it harder for national operators such as KIPP and local groups of parents to open charters that serve their kids. This is one reason why there are almost no charter schools in the Virginia and Maryland suburbs surrounding Washington, D.C. — and only one is opening in the area (located in tony Montgomery County, Md.), two decades after both states allowed for them to come into existence.

But thanks to the federal Race to the Top initiative, and the efforts of reform-minded governors and legislators, caps on the growth of charters have either been lifted or eliminated altogether. As a result, there are new opportunities for charters to spring up in suburbia. Also driving the interest: Families in those communities who are dissatisfied with the quality of instruction and curricula in their burgs. Middle-class black, Latino and immigrant families, who moved to suburbia in the hopes that their kids could attend high-quality schools, have learned painfully that this isn’t always going to happen. Suburban white families with kids suffering from autism and other disabilities have also found out that traditional districts are hardly responsive to their concerns; other families, who have found that they are spending money on tutoring that actually does what districts are supposed to do, want alternatives other than homeschooling (which they may not have the capacity to do on their own) or spending out-of-pocket dollars on private schools.

This hits upon another reality: Suburban districts can no longer hold themselves up as paragons of high-quality. No Child’s accountability provisions have exposed the reality that many of these districts serve kids from poor and minority households as abysmally as their urban counterparts, while offering mediocrity to kids from white middle-class backgrounds. As shown by the George W. Bush Institute’s Global Report Card, few suburban districts make the grade compared to schools in countries such as Singapore. For example, only 30 percent of students in Fairfax County, Va., would outperform kids from Singapore, and only 41 percent would do better than kids from Canada (a nation that is almost as diverse as the United States); a mere 31 percent of students in Montgomery County would outperform Singapore’s students, and just four-out-of-ten would beat out their peers in Canada.

Faced with such threats, suburban districts and teachers’ unions are using any means available to keep charters out of suburbia. In the case of Massachusetts and New Jersey, it’s the matter of the state actually controlling the process of approving charters. The districts rile up families satisfied with what they offer by arguing that their schools will be starved of local dollars that go to charter schools unaccountable to local regulation. They always fail to mention that charters are actually subject to much-stricter levels of accountability — in fact, must prove themselves worthy to state taxpayers up to the risk of being shuttered if they fail to improve student achievement and manage money properly. But given that just 13 percent of Americans can accurately describe a charter school — and the willingness of charter school foes to play fast and loose with the facts — it becomes easy for suburban districts to work state legislators who worry about keeping their constituents satisfied. This is especially true of Democrat legislators, who also think they still need support from NEA and AFT locals — even though moves made over the past year have proven that the two unions are no longer all that influential.

For the charter schools movement — and school reformers in general — the battles in both states are reminders that they must step up their political savvy, especially in a time in which the No Child Left Behind Act may soon no longer be around for reform-minded governors to use as weapons in pushing for systemic reform. This means stepping up lobbying, advocacy, and media activity — including explaining to suburban parents (especially those satisfied with traditional schools) how their families will benefit from expanded school choice. School reform philanthropies should also move down to the grassroots level and help families in those communities start their own charters; doing so will also show to families what charters can look like, fostering new supporters.

Charter school operators also need to find ways to include families within the governance of the schools they run. This, by the way, is a major issue even for parents in urban communities who are generally satisfied with charters. It will take more than just creating parent-controlled advisory boards. Charter school operators need to figure out how to take the saving grace of the otherwise-woeful special education ghetto — the ability of parents to develop individual learning plans — and apply it to their own operations.

But the most-important step must come from states themselves — and the school reform movement must press for this: Overhauling how states fund American public education in the first  place.

Considering that most states are already bearing much of the tab for schools (and that they actually control those systems in the first place), it would make sense for states to replace local property tax funding with state dollars. This would allow for the expansion of all forms of choice by turning the dollars into vouchers that follow every child to whatever school, public, private or parochial, they so choose. And it stop districts from arguing that reforms will cost them in terms of local tax dollars as their justification (as well as spur adequacy and equity in education).

But because states have not moved in this direction — and reform-minded governors have not argued for this step — what happens is stalemate. Districts can justify opposition to charters and all choice — as well as perpetuate the myth of local control — because they   are still dependent on local property tax dollars. At the same time, the districts can engage in hypocrisy by continuing zoned school policies that further restrict choice, and continue to provide their students with mediocre (and in the case of their poor and minority students, abysmal) instruction and curricula.

As a result, only a fifth of the nation’s children and their families can actually take advantage of some form of school choice. That’s shameful. Asking families to put up with mediocrity (or failure) and endanger the futures of their children is absolutely objectionable. Every child, no matter who they are or where they live, should be able to attend schools that can help them succeed in school and in life, and meet their needs, whatever they are.

Massachusetts and New Jersey could easily short-circuit these efforts against charter school expansion by taking over full funding of public education.It’s difficult to argue against local control when the states only provide, respectively, 39 percent and 41 percent of  funding for their public school systems. Same is true for other states. It is easier to push for (and sustain) reform when districts can no longer use local taxation as a means to keep in place a status quo that does little for children.

The Dropout Nation Podcast: Beyond No Child Left Behind