Voices of the Dropout Nation: Dr. Steve Perry Decries the Gutting of No Child

RiShawn Biddle
Comments Off on Voices of the Dropout Nation: Dr. Steve Perry Decries the Gutting of No Child 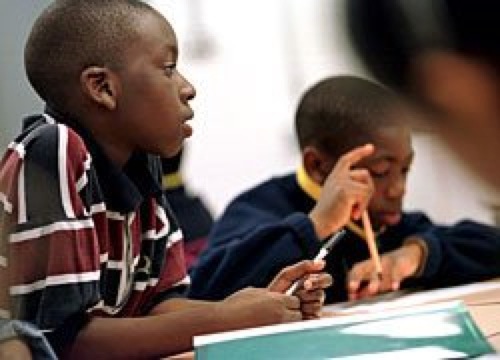 The response to President Barack Obama No Child waivers plan hasn’t been exactly to his liking or that of U.S. Secretary of Education Arne Duncan. Education traditionalists have largely derided the plan as has many conservative, centrist Democrat and liberal school reformers. And for many reasons. Russ Whitehurst of the Brookings Institution, in particular, has already declared that the plan is internally conflicted” because it pushes for common curricula standards while giving away the “common accountability” needed to hold states accountable. And as your editor declared on Friday, the waivers are a white flag for the kind of systemic reform needed to help all students, including poor and minority children, succeed in school and in life.

Capital Prep Magnet School principal and CNN commentator Dr. Steve Perry, whose new book, offers steps to helping parents take power in education, offers his own thoughts about the No Child waivers. He rightly calls out the president for his step back in improving schools that have perpetuated decades of educational neglect and malpractice.

This is sad. President Obama has the appropriate catch phrases “teaching to the test.., higher standards” and “accountability”. The problem? All this does is strip the teeth out of the tiger.

No Child Left Behind is a policy that says simply, every child should be “proficient” in the core subjects of math, reading and science by 2014. If the school has not educated all of its kids to proficient or is showing adequate yearly progress towards all, then after six years, the schools must use the hundreds of millions of dollars they receive to educate kids to proficiency to provide the students they have failed educational options, such as tutoring or the option to select a better public school within the same district.

The beauty of No Child for minority, poor, English Language Learner and other ‘subgroups’ is that the school was obligated to provide them the same education. Meaning, until No Child, suburban schools with poor, minority, special education, and English Language Learner kids could refer to themselves as great, because the majority of the kids — middle class and White — were doing find even though it was an open secret that hundreds of other kids in the school were being ‘left behind.’

George W. Bush, yes THAT George W. Bush said, essentially, ‘That’s some B.S. Since we, the federal government are paying hundreds of millions to those suburban districts specifically to educate poor and minority kids, the schools better educate them — or else we’re taking our money back, allow the kids to go to better schools’  (ostensibly taking their tuition with them to another school). Yes, that George W. Bush. This is why No Child was so widely supported by staunch liberals like Ted Kennedy and was passed w/ overwhelmingly bipartisan support.

No Child set standards measured by standardized tests that were created by the states’ own educators. Essentially the law says: “We need something to measure. You, states, ask your teachers to either identify or create your own test to measure if your students are learning from your teachers.” What happened next is why we are here. The kids failed the tests their teachers selected! Instead of teachers accepting responsibility, they blamed race, poverty, community, parents, the economy, test anxiety and the test they selected.

It comes as no surprise that the unions and many superintendents are and have been vehemently against No Child. That’s because it requires that all kids should learn and if they don’t, We The People are coming to get the tuition back that we paid for our kids to go to a school that educates all equally. You know, what the U.S. Supreme Court refers to as a basic human right.

Now President Obama has, like so many Democrats, folded like a wet piece of paper and buckled like a bad knee just in time for election season. What the hell is wrong with teaching to the test?  Have you ever read one of these test? They don’t limit teachers they guide them to teach skills that are proven to be essential to academic success.

In fact, if you ever met a kid who did well on these exams you wouldn’t think they were dumb, quite the opposite because the tests measure skills like adding whole and partial numbers, reading and comprehending both fiction and nonfiction text, editing and revising sentences, writing a basic five- paragraph essay (what would essentially be a cover letter), using evidence an logic to make a point as well as some basic science concepts. That’s the big mean old test. A basic skills test that measures the ability of 10th graders  to read write and compute on the ninth grade level. Yes, ninth grade, because ‘proficient’ means ‘approaching’. So when kids are below proficient or ‘basic’ they are testing at least two grade levels below.

I am very disappointed in President Obama. But I’m not surprised. His education policies to date have been propped up by a No Child knock off, Race to the Top. In this program states compete for federal money that, as we know, doesn’t exist. Therefore the brass ring, the impetus for making changes, federal money to pay they bloated local public school budgets, was gone before it arrived.

Does No Child need to be tweaked? Of course, its almost blind ambition doesn’t allow for the nuances of an effective school to be measured like, daily attendance rates. (Good schools have very high attendance, like well over 95 percent daily). Tweaking would look like adjusting the testing cycle. Right now, most schools suspend all instruction for at least a month to administer the battery of exams. With an already chopped up school year with what feel like breaks every three weeks, stopping instruction to take tests is flat out ridiculous.

So offer smaller versions of these tests every two-to-four weeks. This will allow instruction to continue and, more importantly, provide teachers with data they can use to inform instruction during the school years. Now, we don’t get the results until July. What in the hell are we gonna do with fourth grade scores when the kid is now in the fifth grade? Had we had the data in September, that kid could have been helped.

Sure, we can discuss the timeline.  The original timeline, however, 12 years, is more than reasonable. An entire generation to fix schools is too long, and now the President is going to extend it? Brilliant. Just freaking brilliant. Here’s a timeline tweak: Take as long as you want to fix your school. But the American people are only going to send our hundreds of millions of dollars to good schools. So holla when you feel you’re ready, in the meantime while you do your educations reforming, we’re going to make sure our kids go to good schools tomorrow.

Tweaking would look like establishing new standards based upon America’s best schools while keeping the heart of No Child intact. The President could identify schools that are in the to 10-percent-to-25 percent in a state, select observable and measurable characteristics of those schools and decree that all schools in that state must be at least on a reasonable trajectory to perform on the same level. US News & World Reports has both a list and strategy for identifying most of these characteristics.  If that doesn’t work, then the President can simply use the check list that he and Mrs. Obama used to select their daughters’ schools. If it’s goof enough for the Obama’s then that school is good enough for me.

The President’s new plan is not a tweaking this straight pandering. While it may, emphasis on may, improve the likelihood that he will be re-elected, it won’t do a damn thing to increase the number of successful schools in America. In fact, it’ll do quite the opposite because by removing the high standards of No Child and the stake therein will go away. And failed schools, including ‘good suburban school’, that fail to educate all kids as the Constitution has been interpreted to say, will survive and thrive – leaving behind millions of America’s most needy and, dare I say, deserving, children.