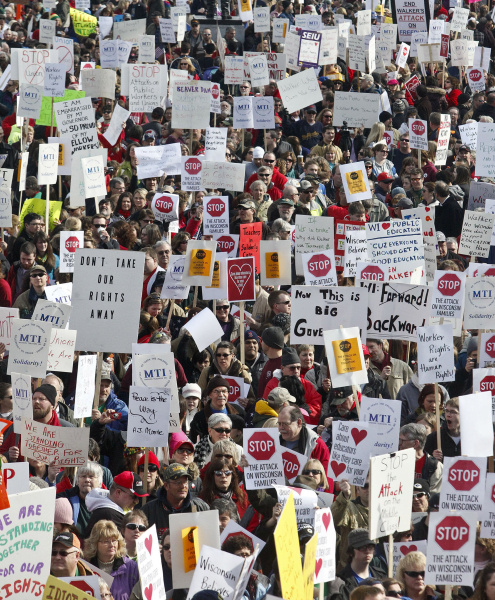 The weakening of the National Education Association and the American Federation of Teachers is one of the running themes in the battle over the reform of American public education this year. From legislative defeats such as those in New Jersey over the reduction of generous and overly expensive retirement and health benefits, to the move by legislatures in Wisconsin, Ohio and Tennessee to abolish collective bargaining, the nation’s two largest teachers’ unions have seen the erosion of their influence over education policy. But the NEA and AFT remain powerful forces, and as seen in Tacoma, Washington (where an NEA affiliate is conveniently holding a strike just after the summer break against the local district) will go to any lengths to keep influence. School reformers must adapt the kind of grassroots and political campaign tactics that can further neutralize their efforts.

In this Best of Dropout Nation, Editor RiShawn Biddle takes a look at efforts to ban the NEA and AFT from using collective bargaining to maintaining the status quo that benefits them, and explains why such moves won’t be enough. Read, consider, and take action.

Contrary to what Dana Goldstein might think, the efforts by Wisconsin Gov. Scott Walker (and other governors throughout the country) to abolish laws forcing school districts to bargain with affiliates of the National Education Association and the American Federation of Teachers is not some threat to feminism. There is plenty to say about that issue — especially about the consequences of having few men (especially black men) in teaching on the nation’s gender- and racial achievement gaps — but this isn’t the subject at the moment. And Goldstein weakens her general argument against the effort to abolish collective bargaining by even mentioning it. (She also fails to consider that collective bargaining rules for policemen and firefighters aren’t on the table because they get a sympathy vote no other public sector professional group would ever get; it would be political suicide for either Walker or anyone else to touch them.)

The goal that Walker, Ohio Gov. John Kasich and others have in mind is to weaken the clout of public employee unions in structuring work rules, compensation deals and layoff policies that have made it difficult for state governments to deal more-realistically with the $260 billion in budget shortfalls facing taxpayers in the short term, and the $3 trillion in public pension deficits (along with billions more in unfunded retiree healthcare costs) in the long run. From the perspective of reforming American public education, ending collective bargaining would also allow states and school districts to move more aggressively on dealing with the teacher quality and systemic school reforms needed to both improve education for all children and spend the $593 billion in school funding more effectively. Given that states and school districts spend at least $16 billion more in 2007-2008 than they did during the 2003-2004 school year, along with the wasted spending on pay raises for teachers to get master’s degrees (when it has been proven that degree attainment isn’t correlated with — or causative of — student achievement), such a move theoretically makes sense.

But on the education front (and more generally, when it comes to overall government operations), Walker, Kasich and others fail to consider the reality that ending collective bargaining won’t lead to meaningful school reform.

Despite their weakened positions, the NEA and AFT still have the war chests and the bodies to influence state laws in order to achieve their goals. The two unions ladled out $59 million in campaign donations during the 2009-2010 election cycle alone; they also doled out $277 million over the past 11 years, according to the National Institute on Money in State Politics. This gives them tremendous clout in state legislatures even in the few states in which they cannot technically conduct collective bargaining or where union influence is at first glance rather weak — and structure state laws and policies that restrict what school districts can actually do.

In Alabama, for example, the NEA affiliate there put the kibbosh on former governor Bob Riley’s efforts to allow for the presence of charter schools; it also backed both the eventual winner and loser in the gubernatorial race to succeed him. In South Carolina, another state in which collective bargaining is not allowed (and the state NEA affiliate is floundering), the teachers groups there have successfully opposed efforts to create school vouchers and other reform efforts.

For the NEA and AFT, along with other public sector unions, focusing on lobbying and campaigns actually works better for their cause than collective bargaining. Why? Because they no longer have to slog through negotiations with hundreds of districts. They can bring lobbying heft to the table, and also bring paid research as well. Given that most legislatures lack the massive research and analysis staffs found in Congress, unions can place themselves into the halls of statehouses as experts on education finance and teacher quality issues without breaking a sweat. Teachers unions have long ago mastered the art of lobbying and campaign finance to keep their positions as leading players in education; despite their weakening hold,  they still have major influence.

Meanwhile it isn’t just the NEA and AFT that are opponents of efforts to overhaul teacher compensation and other school reforms. Suburban school districts have spent the past two decades opposing expansion of charter schools, and have been among the loudest foes of standards-and-accountability moves such as the No Child Left Behind Act. Many urban school districts have been unwilling to aggressively tackle their dysfunctional bureaucracies and embrace the kind of outsourcing efforts used to achieve efficiency in the private sector.

Essentially, abolishing collective bargaining will weaken NEA and AFT influence. It keeps the two unions from essentially sitting on both sides of the negotiating table. It’s worth doing. But it won’t solve all the systemic problems within American public education. Legislators need to be thoughtful about taking campaign dollars from the NEA and AFT (and the ultimate cost of accepting the cash). School districts need to get their operations in order and embrace innovative ways to improve education. Teachers union bosses and teachers who oppose reform need to stop carping that somehow they will lose all influence if collective bargaining no longer exists for their use.

And as for school reformers? Those in favor of banishing collective bargaining need to think carefully before arguing that abolishing it will fix what ails our schools. And those against it should realize that the moves Walker and others are making on this front would be helpful to their ultimate cause.