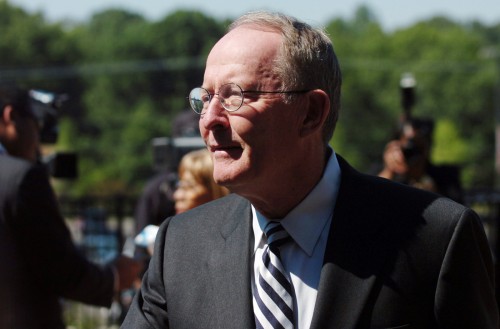 Five steps backwards to the bad old days of federal education policy. Tossing in the towel on the systemic reform of American public education at the time when kids and the economy need it most. What else can be said about the proposed revamp of the No Child Left Behind Act being pushed by Tennessee U.S. Sen. Lamar Alexander and some of his fellow Republicans in the federal upper house?

The proposed elimination of the law’s Highly-Qualified Teacher provision isn’t exactly bad news. After all, all it has done is allowed states to simply grandfather in Baby Boomer teachers and others who may not necessarily be fit for classrooms instead of actually addressing teacher quality issues. But the Alexander plan — also known as Put Head in Sand and Ignore Reality — doesn’t take the same approach to pushing for teacher quality reforms — including requiring the use of student data in teacher evaluations — that has been embraced in the first two rounds of the Race to the Top initiative. At the very least, states should have to earn their federal subsidies.

As for the rest of the package? It’s hardly the “rare combination of thoughtfulness and humility” that Fordham’s Mike Petrilli dares to proclaim it to be. As with U.S. Secretary of Education Arne Duncan’s No Child waiver effort, the Alexander plans proposes to simply do away with the Adequate Yearly Progress provisions that have exposed the low quality of education across the nation’s public schools — including urban districts and in suburbia. Essentially, Alexander is proposing a set of mealy-mouth college- and career-ready standards that simply avoid holding states accountable for the quality of education provided in all but a few of its traditional public schools. Poor and minority children in suburbia — and even white kids in those schools — will simply have to struggle in cultures of mediocrity that, as Dr. Steve Perry noted in this month’s Conversation podcast, are often just marginally better than urban dropout factories.

Meanwhile the Alexander plan fails to deal with the reality that accountability needs to be expanded, not scaled back. The need to force the overhaul of ed schools, who train most of the nation’s new teachers, is still critical to the reform of American public education. Yet the Alexander plan is silent on that issue. Nor do Alexander’s proposals address the crisis of low educational achievement among young men of all backgrounds, one of the leading symptoms of the education crisis. As Richard Whitmire and I proposed in June, simply requiring gender to be measured as part of subgroup accountability would do plenty to force states and districts into dealing seriously with this problem. And setting a plain, simple measure of chronic truancy — an early warning indicator of academic failure — would give teachers and principals honest data that they can then use in keeping kids in school. Right now, only two states — California and Indiana — offer some sort of breakdown of chronic truancy data, and that’s not good enough. And school choice and Parent Power? Save for supporting the expansion of charter schools, not a thing.

What is particularly amazing is that the Alexander plan simply returns things back to the days when the federal government ladled out dollars with almost no accountability in return. It doesn’t embrace the best elements of Race to the Top — including its emphasis on forcing states to compete for federal money and show results. This is especially shameful because maintaining the program-based funding nature of Title I will do little to spur reform. If anything, it will eventually lead to a renewed form of compliance-based approach to how the feds oversee those funds that everyone — including Republicans and conservative reformers — decry. This is because under the Alexander plan, many states will simply go back to spending federal money without any consideration of results, which will lead to an eventual backlash.

There are those who will argue that the efforts by reform-minded states will continue without strong federal education policy. But they fail to remember that No Child is one of the main reasons why these reforms have accelerated in the first place. For reform-minded governors on both sides of the political aisle, No Child has proven to be the tool they need to beat back opposition from suburban districts and affiliates of the National Education Association and the American Federation of Teachers, which have long dominated education at the state level. The law, along with Race to the Top, is the leading reason why 13 states this year expanded school choice, either in allowing for the expansion of charter schools and starting various forms of school voucher plans.

All in all, the Alexander plan, like Duncan’s waivers and House Education and the Workforce Committee Chairman John Kline’s own efforts, simply does the bidding of education traditionalists (who don’t want any form of accountability) and fails to serve children. And any reformer who can defend this mishmash should look in the mirror and ask where do they really stand when it comes to our poor and minority kids.

But the proposal isn’t exactly surprising. As with the current GOP aspirants for the White House, the Alexander plan is shaped by the rebellion against the excesses of George W. Bush’s presidency and his legacy, on education, as the Democrats’ favorite Republican. Movement conservatives may be generally supportive of expanding vouchers and charter schools, two of the most-prominent elements of Bush’s education policy. For Alexander, a former U.S. Secretary of Education who ushered in the development of Value-Added Assessment of standardized test score data during his tenure as Tennessee’s governor, he must also keep in mind that he is up for re-election in 2014. He doesn’t want movement conservatives to offer up any challenge that will upset his goal of continually holding some form of political office.

No matter how one looks at it, the Alexander proposals aren’t worth the paper they are printed upon. The only good news is that Republicans are in the minority — and thus the plan has almost no chance of seeing the light of day this year. Unfortunately, Duncan’s waiver effort is still under way and some centrist Democrat reformers (notably Democrats for Education Reform, which rightly trashed Alexander’s plan) are moving away from outright opposition to trying to make it more-palatable for children’s consumption. Like conservative reformers who back the Alexander plan, they too should just stop and get back to work on pushing for an expanded federal education policy that pushes states further on embracing systemic reform.

The Conversation at Dropout Nation: Dr. Steve Perry on the Need for School Reform