The End of Ed Schools — and Teacher Credentialing?

RiShawn Biddle
6 Comments on The End of Ed Schools — and Teacher Credentialing? 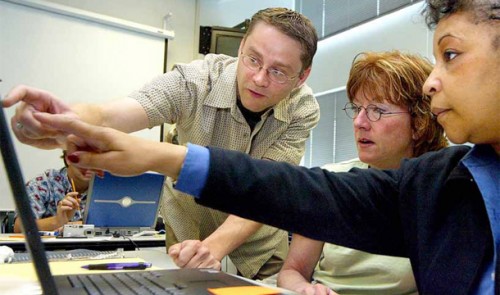 When it comes to America’s system of training teachers, two things are crystal clear. The first? That America’s university schools of education, which train nearly all of the 200,000 or so teachers who attempt to enter the profession every year, are doing a shoddy job of recruiting aspiring teachers and providing them with the skills and knowledge they need to succeed in the classroom. The second: That there is no correlation between the credentials teachers are granted and their ability to improve student achievement over time.

This week, two studies once again confirm both realities. And it is past time to take real action to improve the teacher training pipeline so that our kids get the high-quality education they deserve.

The first bit of latest news comes courtesy of the American Enterprise Institute, which released a study earlier this week on the abysmally high levels of grade inflation among ed school majors. The average ed school student at Indiana University’s ed school on its main campus in Bloomington had a simple grade-point average of 3.66, higher than the g.p.a.’s of students in the university’s other majors; as the study’s author, Cory Koedel notes in another study he conducted this year, math, science and economics majors only average g.p.a.’s of 3.06 , while those taking social science and humanities courses barely average over a 3.0.

At the University of Missouri’s ed school, the average student garners a simple g.p.a. of 3.80, nearly a full point higher than a student majoring in math, science and economics. Only psychology ranks as the second-easiest major on its campus — and even an average student in that major is only rewarded a 3.43. In fact, every student received a 4.0 g.p.a. in one out of every five ed school classes they took, a far higher percentage than what students in other majors ever receive. Stated simply, an ed school student has a one-in-five chance of earning an easy “A” regardless of their work product.

Essentially, ed school professors — many of whom have sparse experience in the classroom — are doling out too many high grades far too often, providing students with unrealistic assessments of their ability to perform in the classroom. This isn’t surprising: As former Teachers College president Arthur Levine surmised six years ago, one out of every two teachers in America are trained at schools with low entrance requirements. The results that are seen in our classrooms are even less shocking. As longtime teaching guru Martin Haberman has noted, half of all aspiring teachers never make it into the classroom, while Richard Elmore has pointed out that half of those who did get employed left the profession within five years — and this in spite of the fact that in most states, teachers attain near-lifetime employment within three years.

As for those who remain? Given that one-third of America’s fourth-graders are functionally illiterate — and our best-performing students rank 32nd in the world on the PISA test of international student achievement — the quality of teaching in our schools among those who attain tenure is abysmal. But doesn’t our teacher credentialing system help weed out laggards? Not at all. As Manhattan Institute scholar Marcus Winters and his team point out in a study of Florida teachers also released this week, there is no correlation between credentials — including certification and attaining graduate degrees, the two things education traditionalists tend to tout in their arguments over school reform — and student achievement. This confirms studies that have shown that credentials and experience account for only three-to-five percent of the student performance.

Yet we continue a system of teacher training and certification that all but ensures that low-quality teachers will continue their educational neglect and abuse on our children. As Winters notes, the pedagogical theories taught by ed schools have little positive impact on student achievement (and ultimately, teacher performance). Yet ed schools have not done anything to move from that emphasis to focusing on the things teachers need to have for success — subject-matter competency, entrepreneurial and leadership ability, instructional method, and the ability to analyze and use data in their work. Nor do they screen out ed school candidates for their subject-matter skills and care and empathy for children; the latter of which can be done simply by following Haberman’s suggested method of having an aspiring teacher show how he works with a child who looks different (and has a different socioeconomic background) than them.

Part of the problem lies with the fact that ed schools, like other institutions in traditional public education, are simply too stuck in their ways to change. The other problem is likely to be purely arbitrary. As Michigan Superintendent Mike Flanagan noted last month, far too many ed schools are focused on revenue instead of quality, and that is particularly clear in his state: Two-thirds of the Wolverine State’s 7,500 ed school grads leave the state, either to work in districts in other states, or perhaps to go into other fields. Savvy collegians may have figured out that getting a teaching degree is such easy work that they just go in, grab the degree, and then head into another field. For ed schools, which receive $7 billion annually for teacher training, tightening up standards (and improving teacher quality) could also mean sacrificing revenue.

But it’s not just the ed schools alone that are responsible. The fact that state teacher certification agencies, which oversee ed schools, are often separate from education departments means that ed schools are not well-scrutinized and regulated; the fact that the certification agencies themselves are also stuck in an old-school mindset (and, until recently, have been banned in nearly all states from even allowing for the use of value-added data in certification) is also a problem. The federal government has also neglected its role in this arena, failing to make ed school accountability an element of the No Child Left Behind Act when teaching (and how teachers get into classrooms) is a critical reason for the nation’s academic failure.

Then there are school districts and those who lead them. As Koedel notes in the AEI study, far too many principals are giving too many of their teachers high marks for performance — even when their ratings don’t correlate with actual classroom performance. The fact that many principals themselves aren’t exactly up to snuff in their performance is part of the problem; as Dropout Nation Contributing Editor Steve Peha has also pointed out in his series on school leadership (and I pointed out last week in my piece on the school data) these principals, often drawn from the teaching ranks, are often unsophisticated in areas such as data analysis and incapable of leading adults. As I noted in the 2008 report I co-wrote for the National Council on Teacher Quality, state laws (influenced by the lobbying of teachers’ union affiliates) have made it difficult and expensive for principals and superintendents to dismiss laggard teachers. But the laggard talent in the administrator ranks, along with the cultures they and incompetent teachers perpetuate, also make improving teacher quality a tough problem.

It will take plenty of work to solve the teacher training problem. And it may have to start with the end of ed schools. The fact that alternative teacher training programs such as Teach For America now account for four out of every ten teachers hired since 2005 means that ed schools are starting to lose their monopoly. But remember, many of those programs actually are started by ed schools themselves, which means that there are still plenty of laggard teachers coming into the field. We need more outfits of the likes of TFA, Urban Teacher Residency United, and Teach Plus, who stand outside of the ed school world, and can recruit and quickly train teachers at higher levels of quality and lower cost.

In fact, one can dare argue that there is almost no reason for ed schools to exist. After all, if an alternative teacher training outfit, a school district or even a teacher professional association in the guild mold, can recruit aspiring teachers, weed out the proverbial chaff from the wheat, and get those teacher up to speed during the first two years on the job, then ed schools can go out of business altogether. This is one idea the Bill & Melinda Gates Foundation can fund and make a success in quick order. And definitely needs to do so: Our kids deserve better than what they are getting now.

The Conversation at Dropout Nation: Dr. Steve Perry on the Need for School Reform