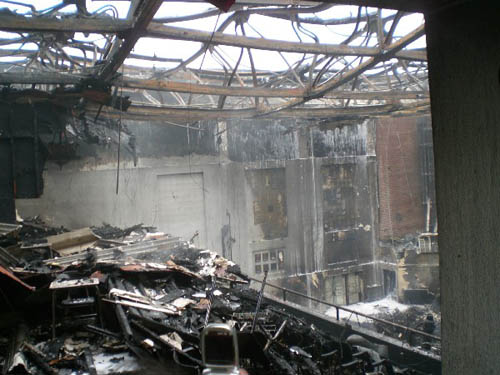 School reform in L.A. Unified may be as burned out as Garfield High's famed auditorium. Photo courtesy of The Eastsider L.A.

When I wrote two years ago about the Los Angeles Unified School District’s plan to hand over 200 of its traditional public schools into charter school operators and grassroots groups, I noted that the proverbial rubber still had to meet the road. After all, L.A. Unified had stood so stubbornly against reform that even famed Garfield High School teacher Jaime Escalante was forced to flee the district’s employ. And the American Federation of Teachers’ City of Angels local is notorious for getting its way and keeping the status quo quite ante.

So it wasn’t that shocking when L.A. Unified’s board voted yesterday to essentially put the kibosh on that reform effort, giving the AFT first dibs on taking over those schools. This move, which came weeks after otherwise reform-minded Superintendent John Deasy rejected one group’s choice to run its school, simply proves that the district is better at talking about change than actually doing it. All but 11 of the 51 schools spun out by L.A. Unified in the past two years have been handed over to groups led by the AFT’s rank-and-file. Given that the AFT now controls the majority of seats on the district’s board after four years of control by a group backed by L.A. Mayor Antonio Villaraigosa, this was also predictable.

But the move also proved the reality that L.A. Unified, in its current form, is nearly impervious to system reform. Because the district is spread across much of L.A. County, it is difficult for Villaraigosa or his counterparts to mount a sustained reform campaign — especially when the AFT has the financial wherewithal (and the benefit of having elections held during periods when citizens aren’t watching) to get its way. Former L.A. Unified board member Caprice Young learned this the hard way back in 2003 when she lost her bid for re-election after the AFT poured $740,000 (and plenty of rumor-mongering) into the campaign of Jon Lauritzen (who died four years later). And Villaraigosa learned this lesson in March when Bennett Kayser, a longtime AFT player, narrowly beat the mayor’s chosen candidate, Luis Sanchez (and helped the union regain control) in one of the nastiest campaigns in recent memory

Beyond the board itself, L.A. Unified’s sclerotic  bureaucracy — most of whom are drawn from the district’s mediocre teaching corps — functions to keep things as is. Although the district has managed to follow through on some critical curriculum reforms and is pushing through with efforts to use Value-Added data in measuring school performance, the district still remains behind path-breaking districts such as New York City and D.C. Public Schools. What results is that reform-minded superintendents such as Deasy simply end up being wardens minding the proverbial asylum, but never really in charge.

This isn’t to say that reform can’t possibly happen. As is, the district is authorizing more new charter schools and is making some small gains in student achievement. But Deasy and Villaraigosa can’t get more done until the traditional district model is broken apart.

The first step should start with Villaraigosa proposing to California’s state legislature to break up the district into smaller districts, with the mayors in each one having sole control of the systems. While the conditions for reform at the state level aren’t exactly as good as they were under Arnold Schwarzenegger, the proposal would finally force Arnold’s successor (and predecessor), Jerry Brown, to finally take a public stand on systemic reform. For Villaraigosa, a former state assembly speaker who may have his eye on returning to Sacramento, this move would also have the added benefit of rallying centrist and liberal Democrat reformers desperate to toss Brown out of office to the mayor’s side.

If the state legislature and Brown give their blessing, the move would finally place full responsibility for education in the hands of the officials who should be most-concerned about the impact of schools on economies and communities. Villaraigosa and other mayors should then embrace the Hollywood Model of Education. This could include taking on the model of school governance successfully being used in New Orleans and being used by Michigan in reforming Detroit’s failing traditional district. It could even involve a modified form of the school spin-off plan L.A. Unified put into place a year ago. Anything would be better for L.A.’s kids than what the AFT and its allies controlling the district intend to wrought in the coming years.

The Importance of Changing How Teachers Work