Incivility Looks the AFT in the Eye 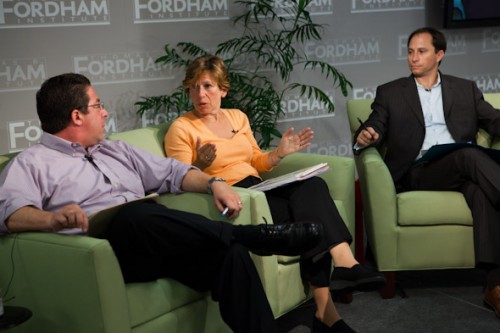 This week, American Federation of Teachers President Randi Weingarten and the mouthpiece for the union’s New York City affiliate, Leo Casey, made plenty of hay about what they call incivility. Weingarten took aim at Steven Brill and his new book, Class Warfare, during Tuesday’s Thomas B. Fordham Institute confab on teachers and school reform, declaring that he was behaving uncivilly. Casey complained on the New York AFT’s Web site that Brill and longtime school reformer Whitney Tilson were hurting the union’s feelings.

The funny thing is that neither Brill or Tilson wrote anything that was even close to being nasty. Strong, certainly, but not exactly nasty. On the other hand, let’s remember that it was the AFT which held a presentation at last month’s TEACH 2011 conference explaining how it went into “kill mode” to unsuccessfully stop the passage of Connecticut’s Parent Trigger law, made sure to exclude Parent Power groups from negotiations over the eventual bill, and used “karma” ( actually, electioneering) to make sure that the state representative who championed the law, Jason Bartlett, lost his re-election bid. Don’t forget as well that Weingarten found herself in what Mike Antonucci would call the “anguished” predicament of having to offer a couple of non-apology apologies for the language in the presentation.

Personally, Weingarten should have apologized not for the language, but union’s longstanding  contempt for families and their interest in becoming the lead decision-makers in education. But let’s be clear: It’s funny that the AFT can actually make such statements about school reformers being uncivil in debate — which is really just thoughtful criticism of its defense of education practices that have denied recognition to good-to-great teachers, have contributed to long-term pension deficits that will burden taxpayers for decades, and have helped condemn millions of young men and women to poverty and prison — when the union uses tough language itself and stands by while its allies verge into even nastier statements.

And now, with Politico‘s Ben Smith reporting that the AFT may have been tied to the creation of Rheefirst, the Web site dedicated to taking aim at the former D.C. Public Schools chancellor and longtime critic of the very practices the union defends, one has to shake their head and just laugh. Since the AFT hasn’t yet responded to Politico‘s calls, I’ll hold judgment on this particular bit of news; after all, I have to see this with my own eyes. But I’ll say this: As your editor, none of this is shocking; such tactics are typical in any political or ideological debate.

As I made clear last week, we should take school reform personally and there is nothing wrong with thoughtfully calling things as they are and engaging in strong advocacy. But others would look at all this news on the AFT’s anti-school reform tactics and so far and call them, well, uncivil. For everyone, including younger teachers within the AFT ranks who embrace school reform, the union is doing itself any favors talking out of both sides of its mouth.

Weingarten, Casey and company may do well to think before they start tossing out terms that can easily be applied to their own rhetoric. Right now, the union definitely has lost the high ground.

Rewind: Giving Parents Power: Six Steps to Learn What Reading Instruction Should Do

Best of Dropout Nation: The Same Junk Over and Over (Or Rick Hess Gets It Wrong)