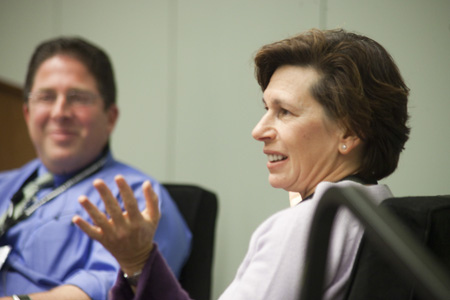 Let’s give American Federation of Teachers President Randi Weingarten some credit. During yesterday’s discussion at the Thomas B. Fordham Institute about teachers and school reform, she had a prop handy — this time, a copy of the Harvard Business Review‘s June 2011 cover story on innovation — to illustrate one of her points. She played to the education traditionalists in the crowd with her class warfare rants about how states should raise $300 billion in taxes to cover $1.4 trillion in teachers’ pension deficits and unfunded retiree benefits, along with a sermon on how collective bargaining helps raise wages and provide voice for teachers. (Apparently the very existence of the AFT and the National Education Association, isn’t enough in her mind.) And Weingarten even threw a bone to school reformers with such declarations as teacher quality is as equally important to the AFT and its rank-and-file members as protecting their employment. She also noted that more-rigorous evaluation systems would “render last in-first out moot.” (The fact that AFT and NEA locals are fighting the development of more-rigorous evaluations, and that they still defend reverse seniority layoff rules in spite of their harmful effects on teachers, taxpayers, and most importantly, children, doesn’t enter into Weingarten’s thinking.)

But Weingarten’s overall arguments — that teacher quality reform efforts have denigrated the public standing of teachers, and that there remains a need for the old-school unionism of the AFT and the NEA in the 21st century — was rather weak. On the first: As American Enterprise Institute scholar Frederick Hess pointed out in his counter, more than 2/3 of those surveyed this year by Phi Delta Kappa and Gallup in their annual poll on education said they wanted their children to become teachers. In fact, the two leading polls have pretty much shown that teachers as individuals and as a profession, remain as highly-admired as ever. Her argument that teachers will oppose reforms that seem like things are being “taken away” only applies to the Baby Boomers (and retirees who still retain membership) who are an increasingly smaller group within the rank-and-file. The fact that Weingarten failed to note the generational divide within her own union (and the NEA), with younger, reform-minded teachers demanding the use of student test data in evaluations and wanting an end to tenure, made her thesis rather specious.

As for the need for the AFT’s old-school unionism? Weingarten’s argument that collective bargaining can somehow be used for “problem solving” and innovation ignores the reality that the entire process is acrimonious by nature, and ends up being a legalistic exercise. Anyone who has written contracts knows that the more one tries to put in them, the more legalistic the deals (and the actual activities governed by them) become. More importantly, it ignores the reality that many of the issues that govern the compensation teachers get and how they actually operate in the classroom are not contained in contracts, but governed by the very state laws for which the AFT and NEA lobby.

Then there is reality that the old-school unionism is a relic of the last century, shaped by worker-manager relations in the industrial sector that never really applied to education in the first place, and don’t really exist now. The emergence of value-added assessment and standardized testing, the success of teachers in improving student achievement can be easily measured; two decades of studies have proven that value-added stands up to scrutiny. The overwhelming evidence that the very traditional teacher compensation regime that the AFT and NEA continues to defend is ineffective in spurring student achievement, and worthless in attracting aspiring teacher to — and keeping them in — the profession proves that their model of the teaching profession (and their vision of American public education overall) is failed.

Then there is one issue that Weingarten failed to address altogether: The penchant of the AFT and the NEA to regard Parent Power — including vouchers, charter schools, and Parent Trigger laws — as threats to American public education. Weingarten can argue all she wants that she advocates for a vision of education that is shaped by teachers’ unions, families, and communities. But given Dropout Nation‘s revelations about the union’s anti-Parent Trigger stance, she has to offer more than platitudes. This time around, she offered nothing.

This isn’t to say that school reformers can pat themselves on the back. As Hess points out, we cannot simply legislate and regulate our way into high-quality education. While Hess forgets that state law and burdensome teacher dismissal rules are a culprit for why districts have done such a poor job in weeding out laggard teachers, he is right in noting that principals and superintendents should use the flexibility they do have to improve their teaching corps instead of just waiting on the more-rigorous evaluations.

Again, Weingarten is certainly charming. Education traditionalists would be better off touting her as their champion than Diane Ravitch. But Weingarten merely offers the same failed, amoral vision that hasn’t served children well for far too long.

Best of Dropout Nation: The Same Junk Over and Over (Or Rick Hess Gets It Wrong)