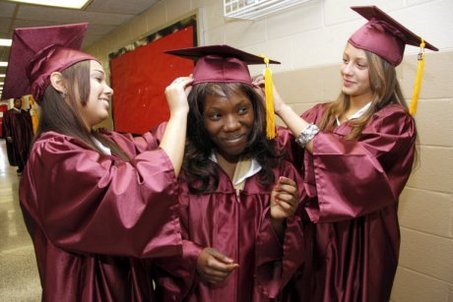 The number of high schoolers who tested below levels of college-readiness according to all four benchmarks used by ACT. Or 28 percent of all students taking the exam.

Percentage of students taking core curricula who were college-reading according to their scores on ACT; 14 points lower than the passing percentage for students who didn’t take a rigorous curricula.

When young men and women get a high-quality education throughout their academic career — including a rigorous, college-preparatory curricula during their middle and high school years — they can take on the rigors of higher education, including traditional college, technical school and apprenticeships, and even take on high-paying white- and blue-collar jobs. But as this year’s ACT results have shown, far too many of our kids — especially black and Latino children — are not getting the teaching and curricula they need to even be ready for higher ed, much less for jobs that require strong reading, math and science skills. And when just one-third of students getting what can loosely be defined as a rigorous curricula have high enough science scores on the ACT to be ready for college-level physics and chemistry, we are doing a disservice to our children and our nation’s future.

The steps taken with Common Core state standards are good ones. But those standards can only be the floor, not the ceiling. More importantly, we must make sure that high-quality curricula is developed along those standards. And without good-to-great teachers, the material will not be worth much to anyone. Let’s get it together.

At the State LevelEducation Governance

Beyond Race to the Top: What John Kitzhaber Means for State Education Governance