Best of Dropout Nation: There is No Public School Choice 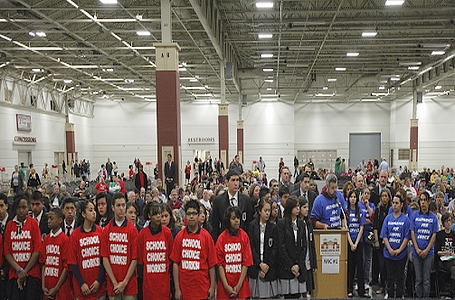 As we continue talking about Parent Power efforts and the education traditionalists who unreasonably oppose them, let’s also remember that there are other forms of action that parents should be able to exercise, but are restricted from doing so. One is the very concept of school choice, especially inter-district options that can allow children to escape the worst American public education offers. But thanks to the practices of zip code education — including zoned schooling and moves by suburban districts to restrict the expansion of charter schools or even allow for inter-district choice — public school choice (at least in the form of charters and even vouchers) is largely restricted to cities such as New Orleans, Detroit, Washington, D.C. and Milwaukee. While efforts such as Race to the Top, along with moves by 13 states this year to expand choice, are wonderful to behold, the fact that so many believe that kids should remain in poverty-and-prison mills is just shameful.

In this Best of Dropout Nation from 2008, Editor RiShawn Biddle provides some early observations on what has become one of the defining themes of this publication: The right of families to give their children the high-quality teaching, curricula and cultures they deserve. Read, listen, think and take action.

The parents of some 260,000 Texas school students will not learn whether their child will be allowed to move from the poor-performing schools they currently attend to better ones as allowed under the No Child Left Behind Act until, October, a month after the beginning of the school year, according to the Houston Chronicle. Not surprising, advocates for those parents are a tad steamed. They should be: The Texas Education Agency, for one, was fined by the federal government three years ago for failing to give parents timely notice about their school choice options.

The latest delayed notification once again spotlights one of the realities of public education: Public school choice doesn’t truly exist, especially for parents of children attending the worst of America’s traditional schools.

Opponents of public charter schools and other forms of school choice generally argue that there is plenty of choice within the traditional public school district in which one resides. At least, that is the theory, especially as magnet schools and other programs have sprouted up in response to those calls for options. No Child’s public choice provision is also cited by choice opponents as an example of public school options.

The choices, however, must be high-quality in order for parents to exercise them; the better-performing campuses can’t just be marginally better than the other dropout factories and academic failure assembly lines in the district. The reality, as I’ve noted over the years while covering the 11 school districts in Indianapolis, is that this isn’t the case. Considering that the label “dropout factory” can — and should — be applied to entire school districts such as Baltimore, Indianapolis Public Schools and Detroit, one can’t help but agree that few parents have little of quality from which to choose.

Even if there are high quality schools and programs,  parents and students must go through gatekeepers — in the form of teachers and guidance counselors — in order to get into them. And depending on the parent’s relationship with those gatekeepers — and more importantly, how that child is perceived by them — these kids may never get the chance to exercise their academic potential. This can be seen in the low numbers of black students participating in AP courses and in the very classes at the elementary- and middle-school levels that prepare them to get into them. As noted by Christopher McGinley, the former superintendent of Pennsylvania’s Cheltenham School district and now the head of the school district in Lower Merion, school districts don’t help middle-class black parents — many of whom are the first in their generation to reach such status –in getting the information they need to make the choices needed to get their kids on that path.

Just as important in the choice question is the ability to use the options in a timely manner with no delay. As seen in Texas (and in Indiana, where similar delays have ocurred), few parents get the information they need in a timely manner; this despite the fact that both district- and state-level officials know which laggard schools will land on the Adequate Yearly Progress list long before all the processing is completed. By the time parents get the information, it’s either summertime — when no one is thinking about schools — or at the beginning of the school year, when plans have already been made.

Before all this, they must know they have choices in the first place. Justin Bathon and Terry Spradlin of Indiana University’s Center for Evaluation and Education Policy reported in a study released last year that such lack of notice — the problem at the heart of the Texas imbroglio — is widespread. Fifty-eight of school districts failed to timely notify parents of their choice options during the 2005-06 school year, according to the General Accountability Office. No wonder why just one percent of the 3.9 million children eligible for school choice options under No Child actually exercised them.

This lack of real public school choice is especially galling when one realizes that state governments, on average, now provide nearly half of all school funding — and in cases such as California and Indiana, the percentage is even greater. State governments can, if they so choose, actually create public school options that stretch across an entire state, allowing parents and children to choose good schools that are still close to their neighborhoods — or, if they choose, make the commute to a better school in the next district. As school data systems become more longitudinal, the concept of dollars actually following the child can truly become a reality, ending the kind of segregation that limits choice.

But this will take a willingness on the part of reform-minded policymakers, school reform advocates and chambers of commerce to spar with suburban school districts and the parents who send their children to those schools. Although those districts can be just as academically inadequate as their urban peers, their problems aren’t as easy to see; public school choice could expose those flaws even more than No Child’s AYP provision already have. And from the perspective of suburban parents, they have already exercised school choice and thus, care little about those who cannot. Essentially the “I got mine, get yours” mentality at work.

This also means battling teachers unions, who don’t want their urban district rank-and-file to lose their jobs. Public school choice, if exercised widely, would also be a verdict on the instruction given by those teachers who are not as good at the jobs as others. And urban districts, of course, wouldn’t be too fond of this either.

Until real options are made a reality, public school choice is more of a fantasy in the minds of those defending the status quo than for the parents and children stuck with little option at all.

Building A Culture of GeniusThis is Dropout Nation

My Grandmother and Yours, Or Why We Must Take School Reform Personally