When You Rally for a Failed Vision: The Driving Forces Behind the Save Our Schools March

RiShawn Biddle
3 Comments on When You Rally for a Failed Vision: The Driving Forces Behind the Save Our Schools March 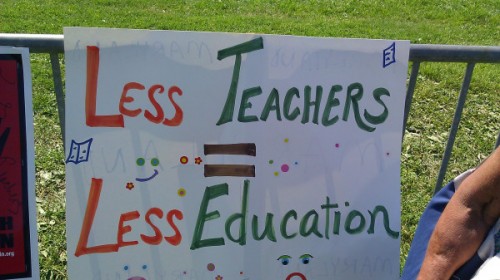 Earlier this week, I had commented that today’s Save Our Schools rally would essentially represent three clear, but rarely-discussed factors in the divide between the education traditionalists who have teamed up with the National Education Association and American Federation of Teachers to put on what is turning out to be a tiny rally far smaller protest rally than the organizers want it to be, and the motley crew of centrist Democrats and conservative think tankers, libertarian school and idiosyncratic left-leaning school choice activists, frustrated urban parents, suburban homeschoolers and others who make up the school reform movement. As I listen to and read the arguments of those who have organized the rally, these three divides are even more-present than I ever thought. And it’s not just about the loss of influence over the direction of education.

The first divide is generational. As Alexander Russo commented earlier this week, the Save Our Schools organizers had to worry about this rally turning out to be little more than a group of middle-aged teachers, education professors and teachers union bosses marching on the Ellipse against a new generation of educators and thinkers. But there was nothing they could ever do about it, largely because it is, for the most part, exactly that. The Baby Boomers who organized this rally have long-benefited from the six decades of efforts by the NEA and AFT to make teaching the most-lucrative public sector profession and the career most-insulated from performance management. Thanks to the work of the two unions, the average 25-year veteran with a baccalaureate degree can count on an average salary of at least $54,400 a year (or more than the median household income), near-lifetime employment (often within three years of entering the classroom), defined-benefit pensions that can pay out as much as $2 million over a lifetime, and nearly-free healthcare both during working careers and into retirement. With three out of every five teachers bearing master’s and doctoral degrees, they have benefited greatly from degree- and seniority-based pay scales that have increased incomes without actually improving student achievement or the quality of their instruction.

Given that they have had such a comfortable deal for so long — and considering that a good number of them, like their counterparts outside of education, still have heavy debt loads that have gotten more-burdensome since the onset of the current economic malaise — they aren’t exactly willing to let this status quo go. And this is what the efforts of the school reform movement threatens to do. Efforts by reformers along with reform-minded (and, in many cases, budget-conscious) governors to make it harder to attain tenure or abolish near-lifetime employment altogether means that their performance would no longer fly under the radar.  Same with moves to subject teachers to performance-based teacher evaluations based on student test score data. Add in efforts to eliminate seniority-based privileges (including reverse-seniority layoff rules ) and suddenly, reform becomes a threat to their economic calculations.

But it means more than that. Teacher quality reforms would ultimately mean the end of experience and seniority as the determining factors for esteem in teaching and the profession one more-concerned with merit and performance. This means a shift to young, talented and less-senior instructors who may have great ideas about improving student achievement, but until now, have been given short-shrift by their more-senior counterparts. It also means that good-to-great teachers, who have often went unrecognized or have been looked down upon in cultures of mediocrity will now emerge as the leaders in the profession. Meanwhile the move toward using data in shaping instruction and curriculum means learning new skills, something that many longtime instructors aren’t interested in doing both because of their unwillingness to grow professionally and their view that those practices and techniques are an affront to their philosophies on teaching.  For many Baby Boomer instructors, all these shifts are untenable, even though it is already happening.

Then there is the racial divide.  The school reform movement’s emphasis on improving education for poor black, white, Latino and Asian children — and the exposing of the low quality of instruction in the nation’s classrooms — has cast a harsh light on one of the biggest concerns for poor and minority families, especially those with young sons:  That there are teachers damning kids who don’t look like them with low expectations. Most of the problems have far less to do with race than with a system of teacher training that has brought too many low quality and poorly-trained teachers into classrooms. But, as Martin Haberman and others who have specialized in training teachers to work in majority-minority classrooms have pointed out, far too many ed schools have not trained teachers to deal with minorities, especially young black and Latino men.

This reality is a particular concern for black, Asian and Latino families, especially those entering the middle class for the first time. They are finding out that suburban schools can be just as abysmal as the urban dropout factories they fled, and that the racial divides can be just as deep.  As University of Michigan Associate Professor Karyn Lacey noted in Blue-Chip Black, her sociological study of middle-class black families in the area surrounding the nation’s capital, black families living in Fairfax County found themselves battling teachers and guidance counselors who wanted to relegate children to academic tracks that keep them from getting high-paying white- and blue-collar jobs.  And as Tom Luce, the former president of the National Math and Science Initiative has made clear, there are far too many minority high school students who are never informed that they can — and should — take the Advanced Placement courses they need to succeed in college and life.

This isn’t to say race is the biggest issue. One of the more-amazing themes of the nation’s school reform movement is that white men and women, many of whom are from the middle class, have actually joined together with black, Latino and Asian men and women to challenge practices that have endangered the economic and social destinies of children whose skin colors and backgrounds don’t match their own. And there are plenty of education traditionalists of all races and ethnicities who want the best for all children. But in defending the traditional system of American public education, they are supporting practices and widely-held mythologies that are economically enslaving far too many black and Latino children.

Then there is the class divide. As Peter McDermott and Julia Johnson Rothenberg of at the Sage Colleges have noted in their research on school engagement, urban and low-income parents often perceive schools to be unwelcoming and interactions with teachers to be “painful encounters.” Certainly some of this has to do with the negative experiences these parents have had with schools — especially those failure mills that they once attended and to which their children now go. But it is also about the fact that there are many teachers who look at parents — especially those from poor and minority backgrounds — with condescension and disdain.

These teachers, many of whom would not be considered good or great in the profession, prefer to relegate parents to field trips and homework; look down on those parents who may not be capable of helping their kids because of their own learning issues; and are hostile to those families who want to take an active role in shaping the education their kids receive in school. And it’s not just these teachers: As revealed in survey of Houston principals conducted by the New Teacher Project, administrators who felt they didn’t have time to handle teacher evaluations and serve as instructional leaders wanted to spend less time working with parents.

This class divide, exacerbated by a compensation system that rewards teachers for degree-attainment and seat time instead of their effectiveness in working with families to improve student achievement — crosses all races. It is why Baby Boomer black and Latino teachers, principals and superintendents working in school districts that have been massive dropout factories for generations are as hostile to school reform as their white counterparts. It is why a Pedro Noguera is as much opposed to school reform as Diane Ravitch. It is why the teachers who  make up a large portion of the NAACP membership have swayed the organization against reform — and why Hazel Dukes dared to accuse charter school parents of “doing the work of slave masters”.

Ultimately, it is this class divide that explains why you won’t see the Gwen Samuels or the parents of kids at Compton’s McKinley elementary school participating in the Save Our Schools march — and why they will likely be accused of being the tools of “corporatist” school reformers by education traditionalists far too caught up in their anti-intellectualism to see what their defense of the worst American public education offers has wrought. The very idea of poor parents opposing those who have influenced the conditions of the schools that robbed two generations of children isn’t exactly a comforting thought.

And these divides are among the reasons why a failed vision of American public education is losing support, no matter how many of its defenders march on the White House.

Building A Culture of GeniusSchool Leadership