Can Indiana Get School Takeovers Right?

RiShawn Biddle
Comments Off on Can Indiana Get School Takeovers Right? 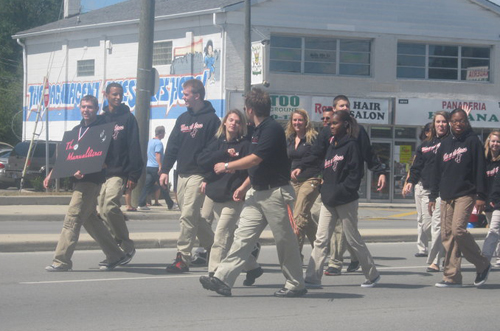 The only kids at Manual High who may graduate. Photo courtesy of the Indianapolis Star.

Even among the nation’s 2,000 dropout factories, Emmerich Manual High School in Indianapolis stands out for its pervasive academic failure. Within the past three decades, the district that operates the school, Indianapolis Public Schools, has instituted numerous reform efforts, including the replacement of principals, to something called the Alpha Program (which monitored the classwork of Manual’s constantly bulging population of 16-year-old freshmen), and even a move funded by the Bill & Melinda Gates Foundation to break up Manual into smaller high schools within the same building. And still, Manual remains a failure mill.

At some point, one has to realize that the problem is not just laggard teachers and administrators, but a district that perpetuates systemic failure. The same culture of incompetence at the school is usually mirrored by central office staffs — many of whom were once abysmal teachers and principals themselves. And IPS, one of the worst school districts in the Midwest outside of Detroit, has certainly proven to be incapable of serving children. The regime of Eugene White, who came to the district in 2005 to lead its overhaul, has proven to actually further the incompetence, with abysmal school leaders such as Jackie Greenwood — who ran Manual’s equally abysmal sister school, Arlington Community — failing upward, principals taking up successful overhauls (notably former John Marshall Middle School Principal Jeffery White) being forced out, and rampant nepotism (including the appointment of White’s own son to an IPS position) becoming the norm.

This persistent failure explains Friday’s move by Indiana Superintendent Tony Bennett to begin the takeover Manual, Arlington and four other IPS schools that have been abject disgraces for the past six years (and, in all honesty, much longer than that). The new question is whether the Hoosier State can succeed in turning around those schools when so many others have failed.

While the state has not yet chosen any of the five turnaround models available under the state’s own school accountability law, it has already selected three private-sector school operators to handle the effort. The problem with the choices? The quality of the operators may not stack up to the challenge. One of them, the EdPower division of local charter school Charles A. Tindley, may actually be capable of doing the work, especially since Tindley is one of the state’s best charters. But EdisonLearning, the famed school turnaround outfit started two decades ago by Chris Whittle, has not had a strong record of success. Its failures to improve student achievement in Baltimore and Philadelphia are enough to put it out of the running in any turnaround situation. (I’m still reporting on the third, Charter Schools USA.)  Bennett and his staff could have — and should have — selected a stronger group of outfits or even encouraged existing charter school operators in the state — including the Knowledge Is Power Program chain — to get into the turnaround game.

The second problem is that turnarounds in general don’t work. As former Thomas B. Fordham Institute scholar Andy Smarick (now a  New Jersey state official working on Chris Cerf’s efforts) pointed out in his own study of school turnarounds, just 11 percent of California schools placed into overhaul had made “exemplary progress” three years later; just nine percent of laggard schools in Ohio managed successful turnarounds. And as seen in New Jersey — where the state took over a series of districts, including Jersey City — and New York with its effort to turn around the Roosevelt school district, states just do an abysmal job of operating schools and districts. State education departments such as Indiana’s just lack the infrastructure to keep tabs on turnaround or even operate schools. That the state still has to take on the systemic problems throughout American public education — including the low quality of teacher training — that have helped foster these failure mills means that no turnaround will be simple work.

There are two moves Bennett should consider doing. The first comes courtesy of Indianapolis Mayor Greg Ballard, who offered earlier this year to take over oversight of the schools,converting the schools into charters, either allowing charter operators or even community groups (including parents) to run those schools. It would be similar to the move five years ago by Louisiana’s state government to launch the Recovery School District and would follow upon what Detroit is attempting to do; given that Ballard is already in charge of authorizing and overseeing charter schools, the mayor (and, if he loses office this year, opponent Melina Kennedy) has the capacity to make this a success.

The second: Take the steps made by reform-minded districts such as New York City, Washington, D.C., and Chicago, to shut down the dropout factories and replace them with new charter schools. Given that Manual, Arlington and the other schools have been failing for decades, it makes no sense to continue educational malpractice. Either way, the kids deserve better than what these failure mills have offered for far too long.

The Dropout Nation Podcast: No Excuses for Bad Teachers