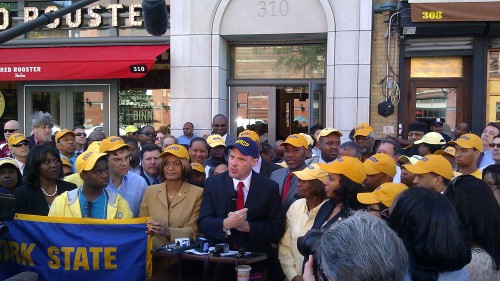 When New York State Supreme Court Judge Paul Feinman ruled yesterday against the effort by the National Association for the Advancement of Colored People and the American Federation of Teachers’ New York City local to stop the city from closing 19 failure mills and ban 16 charter schools from sharing space in traditional public school buildings, it was certainly a victory for children. Allowing Mayor Michael Bloomberg take some steps to put an end to systemic academic failure and offer families opportunities to escape the worst public education can offer.

But it was clearly a fiasco for the nation’s oldest civil rights group on all fronts. From issuing a ridiculous press release that attempted to accuse critics of its suit — including prominent Democrats such as Kevin Chavous and Eva Moskowitz — of being financed by supposedly right-wing groups, to the declaration by its New York honcho that charter school parents were “doing the business of slave masters” (along with her implicit slur against the charter school movement in general), the NAACP has made clear that its interests are not aligned with those of black families and a generation of younger African Americans pushing for the reform of public education. As I told UrbanFaith’s Christine A. Scheller, this is just one more example of the NAACP’s biggest problem: An organization which was once proudly and rightfully in the forefront of school reform in the last century lacks an education advocacy road map that supports systemic school reform. It is now more-concerned with aiding and comforting its teachers union allies (and assuaging old-school members out of step with the times) than with addressing the most-critical economic and civil rights issue of our time.

As for the AFT? The suit by the New York City local — as much driven by its longstanding battle with the Bloomberg administration and defense of education tradition, as by Big Apple local boss Michael Mulgrew’s ambitions to eventually become national president — has wounded the national union’s efforts to triangulate the school reform movement and head off overhauls that would further weaken its clout. The suit has also made clear to the charter school movement that collaboration with the AFT (and the National Education Association) is a no-go-for-sure. And, ultimately, the mishandling of the suit and the effort by the local has also bolstered support for Mayor Bloomberg’s school reform efforts, essentially assuring that his successor as Big Apple Mayor will stay the course.

This isn’t to say that school reformers can simply celebrate the fall from grace of these two organizations. Reformers still have to do a better job of working with grassroots leaders and church leaders, especially those in black communities who have strong ties to the NAACP and view outsiders with skepticism. Charter school operators must also figure out how to bring more community members onto their governing boards and advisory councils; the lack of diversity on those boards is one of the main reasons why some blacks still view charters with skepticism. And similar battles in other cities will eventually become the norm, especially as reform-minded mayors and districts embrace charter schools and support efforts to let them share space with traditional counterparts.

But the NAACP and the AFT have found themselves on the same side — and in the same pit as others with failed visions of American public education.

Can Indiana Get School Takeovers Right?

The Failure to Prepare Aspiring Teachers