At the State Level Three Thoughts 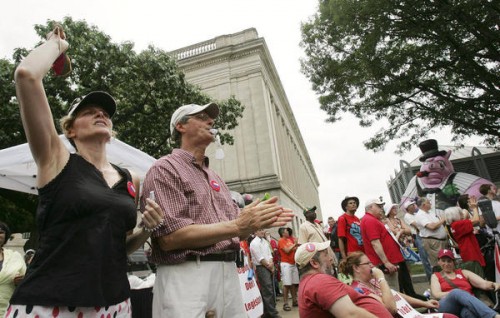 Judging by the protests waged yesterday and all this month by the National Education Association’s New Jersey affiliate, one would have thought that the state legislature abolishing all of the defined-benefit pension and healthcare packages they hold so dear.

What the Garden State’s Democrat-controlled senate and assembly did last night was pass some modest adjustments. Teachers will now have to contribute 7.5 percent of their pre-tax pay to fund their pensions, admittedly a 50 percent increase over current contribution levels; but that is nothing compared to what private sector workers must pour into their defined-contribution plans in order to ensure a decent retirement. The fact that teachers are only allowed to retire at 65 – or the same age as private-sector counterparts – instead of 60 is no hardship at all. And the NEA, along with other public-sector unions, will hold seats on a new state agency charged with developing new, less-expensive healthcare plans for state workers, all but ensuring the union that it will influence those packages.

But for the NEA, the array of piecemeal reforms (which will save taxpayers a mere $122 billion over three decades, or less than the $201 billion in pension deficits and retiree healthcare liabilities outstanding) is symbolic of what has been happening throughout the nation for the past two decades: The days in which they could count on unquestioned support and cover from the Democratic Party is coming to an end.

This has been the case for the NEA and the American Federation of Teachers when it comes to the White House. Sure, President Barack Obama and U.S. Secretary of Education Arne Duncan have been more than willing to lavish stimulus dollars on behalf of the two unions and the traditional districts they hold servile (including the $10 billion Edujobs anti-layoff bailout). Money is all the NEA and AFT are getting. The unions are in a cold war with the administration thanks to its Race to the Top effort, which has helped push states into efforts to overhaul teacher quality and expand the number of charter schools serving the nation. And even before Obama took office, Democrats helped pass the No Child Left Behind Act, whose accountability provisions have helped shed light on the consequences of systemic educational failure perpetuated in part by the two unions.

The NEA and AFT thought they could at least count on Democrats holding court in America’s statehouses. For the most part, they have correctly assumed as much. From the effort two years ago by Indiana Democratic legislators in control of the Hoosier State’s lower house; to the move earlier this year by California Gov. Jerry Brown to remove two school reformers off the state’s board of education and replace them with NEA and AFT allies, statehouse Democrats have been more than mindful of their dependence on the coffers and rank-and-file members teachers unions bring to fore on their behalf.

But the lingering impact of the last recession, along with a sputtering economic recovery, means that many states will continue to collect less in revenues than they expect to spend. As a result, as many as 33 states will face at least $137 billion in budget shortfalls during their 2011-2012 and 2012-2013 fiscal years. Add in increases in Medicaid costs (states are expected to spend 19 percent more on those costs from their own coffers in 2011-2012), and at least $1.3 trillion in pension deficits and retiree healthcare costs, and suddenly, state governments must cut back on the generous deals they have struck over the past six decades with all public sector unions.

States controlled by Democrats — either with full control of statehouses or holding gubernatorial spots — face the greatest pressure of all; save for New York (which has technically covered its $147 billion pension deficit), Democrat-controlled states owe their public sector workers $1.1 trillion in pension benefits alone without enough funds to cover them. They can no longer simply tax their way out of these future expenses. Nor can they ignore one of the driving forces behind these expenses: Traditional teacher compensation, including degree- and seniority-based compensation and sick days (which can be used by teachers to buy service credit that can boost the final year income on which pension benefits are based). The high cost of the compensation, along with evidence that shows that they are ineffective in improving student achievement, and keeps laggard teachers in classrooms and fails to recognize and reward high-quality colleagues, has led politicians in those states to begin nibbling at the edges. Eventually, the increases in contributions will be followed-up by the more-radical efforts being undertaken in Wisconsin, Ohio and other Republican-controlled states.

For the NEA and AFT, the need for states to address these deficits comes just at an inopportune time. Despite the millions ponied up by the unions last year on behalf of Democrats, the party still lost control of the U.S. House of Representatives, majorities in state legislatures and gubernatorial spots. Democrats may still depend on teachers’ union largesse, but they no longer think that those dollars are worth all the kowtowing required to get them. The emergence of centrist and progressive Democrat school reformers as forces in statehouses also means that the prime foe at the federal level will become more fervent at the state level. With organizations such as Democrats for Education Reform and Stand for Children actively providing an alternative voice to the tired rhetoric of NEA and AFT affiliates — and with big-city mayors and young urban Democrats already galvanized for reform — the two teachers unions will continue to lose influence.

What happened last night in New Jersey — actually the latest in a series of moves by statehouse Democrats since Republican Gov. Chris Christie took office last year — is just one more example of the NEA and AFT ending up on the defensive. This can also be seen across the Hudson in New York State, where Gov. Andrew Cuomo successfully pushed the state Board of Regents to allow for student performance data on state tests to be used for as much as 50 percent of a teacher’s evaluation; and in Illinois, where the AFT and NEA found themselves signing on to a series of modest (actually, hardly revolutionary) reform measures in order to stave off the possibility of even more-radical efforts. And despite last year’s lost by Washington, D.C. Mayor Adrian Fenty, more Democratic mayors will be looking to take over traditional school districts and authorize charter schools, further weakening the fraying ties between teachers unions and Democratic leaders.

This isn’t to say that Democrats and teachers unions will part ways. Democrats may be less-dependent on teachers’ union largesse, but they still dovetail ideologically on other issues. More importantly, the NEA and AFT really have nowhere else to turn. While they have been strong donors to Republicans in some states, the teachers unions can’t count on them to defend their interests either at the state or federal level. There will be more Scott Walkers, more John Kasichs and more Mitch Daniels ready to do battle. They need Democrats — including school reformers within the party’s ranks — and will have to adjust their rhetoric accordingly.

Voices of the Dropout Nation in Quotes: What Accountability Must Be

There Are No Unmotivated Parents