There Are No Unmotivated Parents

RiShawn Biddle
2 Comments on There Are No Unmotivated Parents 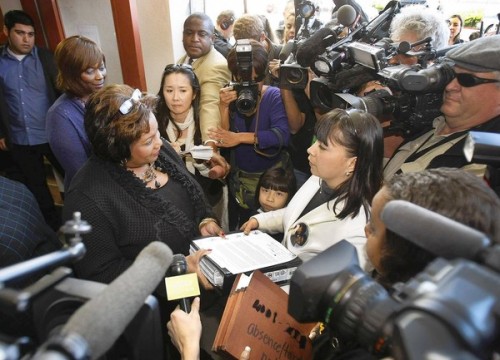 Anyone who is paying attention to the nation’s burgeoning Parent Power movement — from the efforts of Gwen Samuel in Connecticut, to the battle between parents of students attending McKinley Elementary in Compton, Calif. and the district there, to the success of Virginia Walden Ford in D.C. — already know that one of the myths held dear by education traditionalists — that lackadaisical, unmotivated parents are the reasons behind the low student achievement that is a symptom of the nation’s education crisis — is exactly that.

Yet there are still education traditionalists such as USA Today columnist Patrick Welsh — a teacher at T.C. Williams High School in Alexandria — who continue to perpetuate this myth. Dismissing two decades of research — including work by Williams Sanders, the driving force behind the development of Value-Added Assessment — that low-performing students greatly improve their performance after being taught by three high-quality teachers (and even more research that shows the importance of school cultures and principals in fostering cultures of genius), Welsh sticks to his anecdotal mishmash (all gleaned from a recent graduation event) and declares that “statistics and common sense show that with few exceptions, things don’t work that way”.

But in embracing the myth of unmotivated parents, Welsh and others wrongly assume that all parents have either the knowledge or access to information needed to make smart educational decisions. This isn’t exactly so. For most of the past two centuries, American public education has implicitly perpetuated a series of what we now know to be wrongful assumptions: That a child can be sent to any teacher or to any school and they will get a high-quality education. We have slowly learned that the quality of instruction can vary not from school to school and, more importantly, even from classroom to classroom.

But families are just beginning to fully understand this. They are also just beginning to grasp the importance of college preparatory education in giving their children a chance to get employment in high-paying white- and blue-collar professions. And poor and minority families (including the immigrant households Welsh takes time to laud in his piece), are finally realizing that they can no longer just simply attend field trips and help with homework. They must be well-informed decision-makers with real power in shaping education for their children.

While the school reform movement has made some progress on this front, parents are still stumbling around in education. Even now, school data remains a black box of sorts, driven by compliance rather than by the need to give parents information they need to make smart choices.  Organizations such as GreatSchools.org and the Education Consumers Foundation are helping to make school data more transparent and easy to use; the efforts of the Data Quality Campaign are working to improve the quality of state and district data systems. But much remains to be done on overhauling how data is collected and provided. And even when the data is available, state laws and the opposition of teachers unions to releasing such data means that parents are still left out in the cold. It took the Los Angeles Times and its series on teacher quality in L.A. Unified’s elementary schools to finally give Southern California parents information something approaching useful data.

The myth of unmotivated parents assumes that parenting alone can address all learning issues. This isn’t so. For example, 40 percent of all students will come into kindergarten with some form of learning deficiency no matter how often their parents read to them. It is also unlikely that many parents understand such math concepts as algebra and trigonometry; this is especially true when one considers that poor, urban parents are often forced to send their kids to the same failure factories that they attended a decade or two earlier.

This myth ignores the reality that parents don’t simply choose to let their kids languish in failure. Considering that 38 percent of black students and 33 percent of Latino students are forced by zoned schooling practices (and systemic decay within districts) to attend dropout factories, this isn’t exactly the case. It is even clearer when one looks at the cases of Kelley Williams-Bolar and Tanya McDowell, who now face legal sanction for illegally sending their kids to better-quality schools outside of their home districts. And when one looks at the dearth of intra- and inter-district public school choice, it is clear that poor parents are stuck with almost no choice at all.

Even in cities where there are more than one school district (and even a plethora of charter schools and low-cost Catholic school options), high quality school options remain elusive. The experience of the charter school movement — and before that, of the Catholic diocesan schools that were the main alternatives to traditional public education in the last century — has proven that choice is an amazing motivator; parents will run away from failure factories to the possibility of high quality alternatives when given the opportunity.

Meanwhile the myth of unmotivated parents lets those who work in American public education off the hook for systemic academic failure. It allows laggard instructors to remain in the classroom long after the poor performance of students in their care has shown that the teachers should be shown the door. It gives school superintendents, school boards and central office bureaucracies cover for avoiding the tough reform efforts they must undertake within their districts. It allows ed schools to remain complacent and continue their woeful recruitment and training of aspiring teachers. And it allows education traditionalists to avoid responsibility for perpetuating cultures of condescension, in which parents — especially those of poor and minority backgrounds — are treated with utter disdain and treated like pests when they actually stand up and attempt to hold schools accountable.

If anything, the myth is denigrating to the very good-to-great teachers that Welsh and other education traditionalists purport to defend. One can actually take that argument and argue that in essence, teachers and principals don’t matter at all. Not only does such arguments denigrate the hard and sophisticated work that is teaching, it also perpetuates the treatment of teachers as interchangeable widgets that does little to elevate the profession. Of course, Welsh and his fellow-travelers want to have it both ways: They want to both declare that parents are the problem and demand greater levels of respect for teachers (in the form of continuing a failing and ineffective traditional system of teacher compensation); they also want to ignore the data showing the importance of high-quality teaching and still proclaim that teachers are essential in education. But you can’t essentially argue that teachers are helpless in improving student achievement and therefore, unnecessary players in education, then demand that they should be better compensated. Either way, the views of Welsh and his fellow-travelers are condescending to parents, good-to-great teachers, and students alike.

Certainly parents are critical to student achievement. As Herbert Walberg, now a visiting scholar at Stanford University’s Hoover Institution, pointed out in his study of 29 family-school programs, the level of family engagement is twice as likely to predict a child’s academic achievement as their socioeconomic background. It is important that we provide families, especially those from poor rural and urban communities, simple, understandable data — and assistance in understanding what that data means for their children — that they can use to make good decisions. We must also put families into their rightful place as lead decision-makers and consumers in education. This includes expanding school choice, enacting Parent Trigger laws that give parents front-and-center roles in school overhauls, and requiring that every child gets the same kind of Individualized Education Plan (and parents get the potentially powerful role in shaping curricula and instruction) that we require, albeit imperfectly, for special ed students.

At the same time, we also can’t let parents off the hook.  There are parents who don’t deserve the title, who are failures in getting their kids ready for school and in providing for them safe, nurturing home environments. They don’ t deserve to be called parents at all. The concept of Parent Power also implies responsibility: Families just can’t stand on the sidelines waiting for rescue efforts. As I point out in this week’s Dropout Nation Podcast, all parents — especially fathers — should start their own math and reading tutoring classes, and team up together politically to demand reform. School reformers, especially those in the Beltway, have to go beyond proposing laws and undertaking systemic reforms, to work with the grassroots on fostering strong information infrastructures that help parents help their children.

But laying the failures of American public education at the feet of parents alone ignores the systemic problems of low-quality instruction, abysmal curricula, shoddy leadership and pervasive cultures of mediocrity that are truly the main causes of the nation’s education crisis. Traditionalists such as Welsh need to look inward, both at themselves and their colleagues, and begin thinking about how they will be partners with parents and school reformers in helping every child write their own story.