Arne Duncan Does the Bidding of Teachers Unions and Congressional Republicans 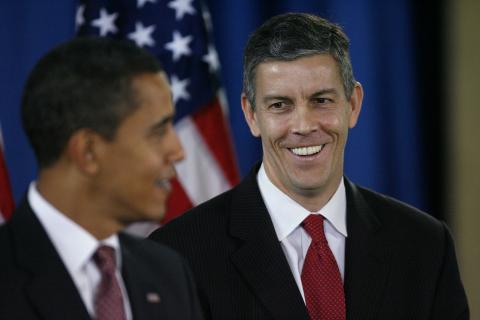 A few months ago, when Arne Duncan was asked by Dropout Nation whether the Obama administration would allow states to waive out of meeting the accountability requirements of the No Child Left Behind Act, the U.S. Secretary of Education declared that he had other things in mind. Namely finally reauthorizing the law. Declared Duncan back then: “Our focus is on getting it reauthorized… We are doing our job in passing that bill.”

But in announcing this week that the U.S. Department of Education would indeed proceed with such waivers, Duncan is engaging in a particular gambit: That his move will force Congress — including the Republicans who control the House of Representatives — to get to business and draft a new version of No Child that suits the Obama administration’s school reform goals. What Duncan has probably done instead is giving congressional Republicans and defenders of the status quo such as the National Education Association and the American Federation of Teachers exactly what they want: Eliminating accountability without so much as risking a public battle that will force both to actually admit where they really stand when it comes to the poorest and minority children.

The official pretext for this move lies with No Child’s aspirational provision that schools will ensure that all kids will be proficient in reading, math and science by2014 — and that so many schools (including suburban districts who seem, on their face, to be performing well) will be revealed as academically failing. Arguing that the penalties for not meeting that provision are too stringent, Duncan is looking to relax accountability altogether by essentially gutting No Child’s Adequate Yearly Progress provisions. This would be a step towards his long-term goal of limiting accountability to the five percent of the nation’s schools (about 5,000 dropout factories and failure mills) that are abject failures. The merely poor-performing schools — including suburban districts that are failing to properly educate poor and minority kids — would be listed, but largely be left alone.

The ideas behind Duncan’s argument are specious. From the underlying math behind the prediction that 80 percent of schools will labeled academically failing, to the reality that there are numerous holes in the 2014 provision, to the fact that gamesmanship by the states (who slowly implemented the accountability measures, then ratcheting up the underlying standards) is the cause of these supposed issues, there is almost no justification for the move. But for Duncan and Obama, this was never about 2014. They want to place their permanent stamp on federal education policy — including fully transforming Title 1 spending from formula-centric spending to the kind of competitive grant competitions featured in the Race to the Top initiative — and are willing to use whatever means or excuse to get their way. By moving to grant waivers, Duncan and Obama hope to nudge all the congressional players towards action.

But congressional Republicans, including House Education and the Workforce Committee John Kline (who does want to gut accountability), are quite happy to sit pat at the moment. For one, they aren’t exactly interested in giving Obama a legislative victory that he can use in his re-election campaign next year. Another reason lies with the conflicts within the GOP over the role of the feds in education policy. Republican governors have been happy to use No Child and Race to the Top to spur reform initiatives that would otherwise gain little traction in legislatures over which NEA and AFT affiliates have held sway. Then there are folks such as former Secretary of Education Margaret Spellings and Sandy Kress (who crafted No Child) who also oppose any move to weaken accountability. And given that most of the freshmen on the House Education and the Workforce Committee are concerned with abolishing ObamaCare, there was (and still is) little appetite for action.

The NEA, the AFT and their allies among defenders of traditional public education do want action on reauthorizing No Child; they want the entire law gutted altogether and revert back to the old system of federal dollars flowing to states and school districts without being held accountable for improving student achievement. But they also face a problem: The Obama administration’s reauthorization plan would still include new efforts to enact the teacher quality reforms the unions oppose so heatedly. And the administration has something of an ally on that front in Senate Health, Education, Labor and Pensions Committee Chairman Tom Harkin (D-Iowa), as well as possible supporters for such efforts from both Republicans and Democrats in the House. Essentially, status quo defenders wouldn’t gain much of a substantial victory.

But in announcing the plan to issue waivers from No Child’s accountability rules, Duncan has essentially weakened the administration’s hand without moving forward its reform agenda. Not that the NEA and AFT are fond of the move (after all, they want action). But it still works out in their favor. Why? With the waivers, Duncan will give the NEA, the AFT, suburban districts, and congressional Republicans what they really want — gutting accountability — without having to actually do the job themselves. They won’t have to face a full public debate over what this step would mean for addressing the nation’s education crisis and the consequences of laying out their positions in full view. Duncan’s move also allows them to argue that the Obama administration has already ditched accountability; all that has to be done is to actually place it in statute. Best of all for education traditionalists and congressional Republicans, the administration won’t gain traction on the rest of its school reform agenda. Why allow for another Race to the Top? It isn’t as if Duncan and Obama have a position of strength from which to negotiate.

Of course, this could work out differently if Duncan and his Department of Education staff craft rules that essentially keep accountability in place in fact (even if AYP is tossed into the trash). The problem is that it’s hard for the administration to do so without encountering the wrath of both congressional Republicans and status quo defenders. Nor would the alternative being offered by the administration (already contained in its blueprint for reauthorizing No Child) be satisfying to many of the administration’s reform allies. One possibility — requiring state education departments to hold accountable districts that fail in educating poor and minority kids for three years or more — won’t work. Why?  Those agencies barely do a good job of holding districts accountable as is. No Child already gives states a set of prescriptive measures to pursue — including turnarounds and shutting down schools — to fix perpetual academic failure. But currently many states rarely force districts to undertake such drastic measures.

At this moment, the Obama administration has given up high ground on the only issue (outside of fighting terrorism) on which the president enjoys bipartisan support. For nothing. Not smart, Arne, not smart at all.

Building A Culture of GeniusThe Reading CrisisThis is Dropout Nation

The Moral Imperative of Literacy