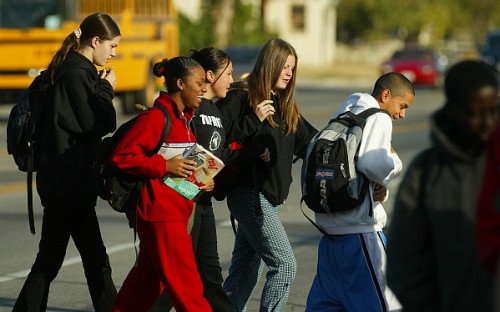 We know where many of these kids will end up: They will become high school dropouts. What is astounding is that thanks to California education officials and the state legislature, we even know the truancy rate at all. Most states are ignoring the importance of reporting credible, honest truancy numbers, leaving unaddressed a critical symptom of the nation’s dropout crisis.

Within the past five years, researchers such as Robert Balfanz have proven that truancy is one of the foremost symptoms of America’s educational crisis and a primary indicator of whether a student will drop out or graduate from school. As Balfanz, Lisa Herzog and Douglas Mac Iver pointed out in a 2007 study, a sixth-grader missing a fifth of the school year has just a 13 percent chance of graduating six years later. In elementary school, truancy is a sign of parenting issues. In later grades, truancy is an indicator that a child has given up on learning after years of poor teaching, lousy curricula and lack of engagement (and caring) by teachers and principals.

Yet, as with graduation rates a decade ago, states and school districts do an abysmal job of tracking truancy (and school attendance overall) and offers misleading statistics on the true size of the problem. California offers a decent start on how to solve the latter. But it will require better data standards and data systems to make real progress.

The problem starts with the statistics itself. Most states calculate attendance by dividing the total number of days missed by students by the total number of days they are supposed to attend (usually 180 days multiplied by enrollment). This metric, used largely for school funding, is great for district coffers. But it’s terrible for addressing truancy. Why? It hides the levels of truancy plaguing a school because it includes all unexcused absences, not just the set number of days under which a student is considered by law to be truant. Add in the fact that tardiness (or excess lateness by a student) is added into the attendance rate and one doesn’t get the full sense of a truancy problem. After all, one reacts differently to a 93 percent attendance rate (which makes it seem as if most kids are attending school) than a rate that shows that 16 percent of students are truant (which is more-accurate and distressing).

What principals, teachers, district officials and parents need is the percentage of students reaching the state definition of truancy (in many states, 10 or more days of unexcused absences) — in order to identify clusters of truancy — and the chronic truants themselves (so they can be targeted for additional help). A group of teachers at New York City’s High School for Telecommunications – frustrated with the district’s poor attendance tracking — are among those developing technologies to improve how attendance is calculated. The technological solutions, however, are meaningless without developing actual calculations that plainly break down what is happening and making the data public for all to see.

California is one of two states (out of 10) surveyed by Dropout Nation that have gone this far in providing truancy data.  (Indiana, the epicenter for a 2007 editorial series Dropout Nation’s editor wrote on truancy for The Indianapolis Star, is the other). Unlike other states, the state Department of Education publishes something called an actual Truancy rate, which shows the percentage of students missing three or more days of school unexcused. Even better, its data system actually shows the number of truant students in any given county, district or school. For a researcher or truancy prevention advocate, this is a much-better first step in determining the extent of truancy than the traditional attendance rates reported by other states.

What one learns, particularly about truancy in districts in Los Angeles County, is distressing. Fifty-seven of L.A. County’s 88 school districts (including the county department of education) had truancy rates of greater than 10 percent. Within the county’s largest district, Los Angeles Unified, 77 of its 658 schools were plagued with truancy rates greater than 10 percent. While high schools were plagued with double-digit truancy rates, so were middle schools such as Charles Drew in the city’s Florence-Graham neighborhood; there, 54 percent of the student population were chronically truant. The truancy rate for L.A. Unified overall was 5.4 percent; but the number leaves out truancy levels at the elementary school level (where as many as one in ten kindergarten and first grade students miss a month of school). (A a full list is on L.A. County is available here.)

The data  isn’t perfect. Tardiness is incorporated into the numbers, which could skew the number of actual absentees. One could also argue that three days of unexcused absence may be strict. But at least California has made a first step towards  reporting realistic attendance data — and school districts have information they can use to address the underlying causes of truancy.

This isn’t happening in a successful way. School districts in Los Angeles County haven’t exactly done a great job addressing truancy. Despite high-profile sweeps, anti-truancy ordinances and other efforts by districts in the county, the truancy rate countywide has barely budged between 2004-2005 and 2008-2009. L.A. Unified, even took the media-grabbing step of having its outgoing superintendent, Ramon Cortines and school board members go door to door to grab truants, is the only one that can report a decline, with a 34 percent decrease in truancy in that time. But even those efforts are only band-aids; more importantly, since the sweeps tend to happen during periods when districts must count up students in order to gain funding, the moves can viewed cynically  as just ways to keep the money flowing without actually doing anything to address the underlying causes of truancy. School district officials and charter school operators in L.A. County must do a better job of addressing the underlying issues — as must their counterparts throughout the nation.

But at least California (along with Indiana) has taken a step that most other states — especially Virginia and Tennessee, two of the other states surveyed by  Dropout Nation — refuse to do.  Accurate, honest, publicly-reported data is the critical first step to making the technological and academic changes needed to stop truancy in its tracks — and keep every kid on the path to economic, social and personal success.