America’s Woeful Public Schools: Too Many Teachers Out of Classrooms

RiShawn Biddle
3 Comments on America’s Woeful Public Schools: Too Many Teachers Out of Classrooms 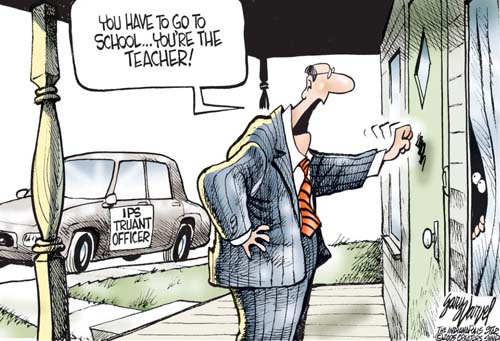 The average percentage of teachers absent each day during the school year, according to a 2008 Center for American Progress analysis of 2003-2004 federal School and Staffing Survey data (the latest available). That’s 170,631 teachers out of the classroom every day, often for reasons that have little to do with illness.

The average number of days teachers in Camden, N.J. were absent during the 2008-2009 school year, according to a report by the Courier-Post. Each day, the district spent $8,748 for 81 substitute teachers to fill in for absent teachers.

The average number of days missed by teachers working in the Lawrence Township school district in Indianapolis, Ind., in 2009-2010, according to a report by WISH-TV.

The average time students spend in classrooms learning, according to a Dropout Nation analysis of 39 school districts. The average teacher in those districts is contractually obligated to work 6 hours, 16 minutes each day.

The average time in class spent by a third-grader in the Anoka-Hennepin Independent School District outside of Minneapolis. An average teacher in the district, by the way, works a 7 hour, 40-minute day.

Teachers are critical to student success. But they can’t be of any help if they are absent from classrooms or spend too little time with kids to help them learn. And this is a major problem in American public education. Thanks to generous sick day policies written into teacher contracts and state laws– including 10 sick days throughout the school year and the ability to bank as many as a full calendar year of days — there are too many incentives for teachers lacking commitment to their work to skip out on classroom duty. As a result, far too many kids either spend their days with substitute teachers — who are often not qualified by any measure to teach — or end up being shipped around to other classrooms so they can get some sort of time. In Indianapolis, for example, 5,500 students a day in the Indianapolis Public School District went without a regular teacher. As a team of researchers led by Harvard University professor Raegen Miller pointed out in a 2007 report, teacher absenteeism contributes to lower student achievement.

But even this would be easy to deal with if the time allotted during the school year for teaching was better-managed. Contracts and state laws often limit the amount of time teachers spend in the classroom and the number of hours students get instruction. Teachers also don’t get time to actually prepare for the next instructional day. And the use of school days for low-quality professional development means that kids are robbed of even more time for learning. This is particularly true in urban districts that serve our poorest and minority children; the absenteeism and low quality of instruction, along with the dysfunction of the districts themselves, lead to kids being left behind in school and in life.

Reforming the traditional system of teacher compensation and evaluation will help. So will putting an end to the dysfunctional bureaucracies that are a feature of traditional districts; the latter would also help teachers, who often feel shunted aside by central offices (and in the worst urban districts, don’t also feel as if they can be kept safe by them). Improving how we recruit new teachers would also help; the need for entrepreneurial, driven, hardy teachers with strong subject-matter competency and empathy for all children in their care is critical. But it will also take a rethink of what instruction should look like, especially in an age of strapped budgets and in a time in which we know that current methods of teaching are often insufficient for improving student achievement. Online learning and DIY school models could help more kids get the high quality teaching they deserve.