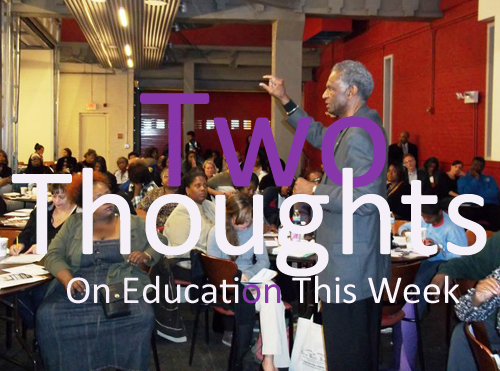 Solving the Howard Fuller Dilemma — or Why School Choice Has to Be for Everyone: Given the string of court victories and legislative successes of late, school choice activists have been triumphant about their goals of expanding the ability of parents to choose high-quality schools — be it traditional public, charter, private or homeschool — for their kids. So they were shocked when Howard Fuller — who, along with former Milwaukee Mayor John Norquist and Wisconsin State Assemblywoman Polly Williams — launched the nation’s first voucher program in Milwaukee three decades ago — announced his opposition to plans in the Dairy Land to ditch the income ceiling and transform the program into the first universal voucher program outside of New England.

For Fuller and for those from Black Alliance for Educational Options (who embrace vouchers as a tool for helping the poorest children avoid damage from failure factories), the problems of universal vouchers are clear:  Providing a universal voucher — especially to high-income families who can afford a private-school education — will lead to private schools taking on kids from wealthier families at the expense of the very poor students for whom they have long advocated. They also think that making the program universal also sets it up for a demise, especially if Democrats (who largely oppose vouchers), take back control of Wisconsin state government.

Supporters of making Milwaukee’s voucher program universal see it differently. From where they sit, opening up vouchers would help plenty of middle-class families — including first-time middle class households with jobs in fields such as nursing and law enforcement — who don’t are just as loathe as poor parents to send their kids to failure mills, but don’t have the means to bear the cost of private school. And this is a considerable population. In Wisconsin, the median family income is $64,609; in Milwaukee, it’s $42,287. With the average private-school tuition being around $8,549 (still less than the average traditional public school costs), it is still hard for these families to bear such costs and still save for retirement. The fact that the vouchers could help attract more middle-class families to Milwaukee is also an important consideration.

This argument between the Fuller crowd and pro-universal voucher supporters is nothing new. It goes back to the divergence in the philosophical support for vouchers that emerged during the 1970s. Nobel Laureate Milton Friedman — who developed the school voucher concept in the 1950s — approached vouchers as a tool of freedom from traditional public education. But University of California law professor John E. Coons, who was among the first progressives to embrace vouchers two decades later, thought of vouchers as ways to equalize school funding; Coons and cohort Steve Sugarman also wanted to subject private schools accepting vouchers to racial quotas to ensure that they weren’t just taking white students.

This divergence, which has once again emerged in  statehouse corridors in Madison, Wisconsin, won’t disappear. As tuition tax credit programs come into being throughout the country, urban supporters of school choice will take umbrage at the idea of universal vouchers in any form, while tax credit and universal voucher supporters will argue that limiting vouchers to poor and minority communities is anti-free market and anti-family.

The thing is, the Fuller crowd and the universal voucher crowd are both right and wrong.

Fuller is correct in fearing that universal vouchers could lead to private schools excluding poor and minority families. But the reality is that this could happen anyway. Given that vouchers come with strings attached (and that private schools may not want their performance subject to scrutiny), private schools can just as easily reject those kids now. But after 20 years, this hasn’t happened. In fact, if anything, the fact that 26 percent of Milwaukee’s kids are attending private schools on vouchers pretty much disproves this fear.

More importantly, Fuller fails to consider that the very limitation of vouchers to poor families is one of the reasons why vouchers have been largely opposed by the middle class. From where the middle class sit, why should they offer kids that aren’t their own an opportunity they cannot get themselves. Given that there are plenty of middle-class families frustrated with the quality of their own schools, they logically argue that they are as deserving as poor families of the ability to escape warehouses of mediocrity and failure mills. The Fuller crowd also doesn’t realize that the universal voucher concept is also an important step in what should happen anyway: Ending zip code-based education by forcing states to fully fund education and voucherize those dollars so they can follow every child to whatever school option they choose. For poor and minority families in Milwaukee and elsewhere who are still stuck with abysmal schools — and those in suburbia whose kids are exposed to neglect and malpractice in otherwise good-performing schools — the ability to choose school options that match the needs of the kids would  be far more helpful than limited voucher programs.

At the same time, the universal voucher crowd must understand that their plan is still shortsighted. For one, it doesn’t fully lead to the voucherization of all school funding that should happen in the first place; the fact that the plan is still limited to only Milwaukee means that true school choice — which would allow kids to attend high-quality schools no matter where they live — still isn’t happening. The universal voucher crowd also hasn’t fully thought through how to deal with the real income and resource differences between the poor and minority families currently participating in the voucher program and middle class households. Simply allowing private schools to charge families making more than $72,000 a tuition above the voucher doesn’t address that issue. If anything, it can backfire, with private schools rejecting poor and lower middle-class families because they can’t pay above the voucher cost.

What is needed is a compromise that looks like the kind of weighted school funding formulas used in San Francisco and Indiana (this is an idea that I’ve been playing around with in my head as part of the development of the Hollywood Model of Education, and one that Matthew Ladner of the George W. Bush Center has also thought over). Poor kids will get more money (and will have their full tab covered) at any school their families choose to attend; while children of middle-class and wealthier families, who can actually bear a larger portion of the out-of-pocket tab, will do so. In such a scenario, a poor kid attending a $15,000-a-year school would get those costs and others (including transportation) covered, while a middle class kid  same school may get two-thirds of the cost covered and a child from a wealthy family may just get a nominal $3,000.

Every child and family deserves school choice. But it must also be done right and in consideration of the economic challenges facing poor and minority families. The compromise floated here would be better than either approach Fuller and universal voucher supporters are defending right now.

What Scott Walker Hath Wrought: Last month, centrist and progressive Democrat school reformers bemoaned Wisconsin Gov. Scott Walker’s successful abolition of forced collective bargaining between teachers unions and school districts. From where they sat, the move simply emboldened hardliners within the National Education Association and the American Federation of Teachers, pushing aside more moderate forces who would agree to modest overhauls of state laws governing tenure and other aspects of teacher quality. And, as I noted in my piece this week for The American Spectator, the NEA is redoubling its efforts against school reform.

While centrist Democrats such as Kevin Carey of the Education Sector attempt to further advance this argument, a different picture has emerged over the past few weeks. In Illinois, NEA and AFT affiliates have found themselves supporting a relatively modest proposal that requires newly-minted teachers to be rated “proficient” or “excellent” during two of the four years they must be served in order to earn tenure. If not, districts could more-easily fire them and keep laggard instructors from getting near-lifetime employment. In Georgia, a theoretically weak union state in which teachers unions hold wide sway over education policy, the legislature will likely approve a bill that would end the use of tenure as the sole deciding factor in teacher layoffs and give school districts the ability to decide whether to use student test data in evaluating instructors. And in other states such as Tennessee, NEA affiliates have found themselves on the defensive as reform-minded governors and legislators have passed initiatives to overhaul evaluations, end collective bargaining and expand school choice.

Why hasn’t the disaster scenario Carey and others have predicted emerged so far? It has to do with the reality that the NEA and AFT no longer have the dominant influence over education policy they once did. Within the past decade, school reformers have used federal education policy and worked together with reform-minded governors and legislators to advance their formulas for overhauling education and weaken the influence of NEA and AFT affiliates. And now, fiscal and social conservatives, who may not share the same goals, but are greatly concerned about how teachers union influence have contributed to the $1.4 trillion in long-term pension and healthcare burdens facing taxpayers, have joined the battle.

As a result, NEA and AFT affiliates are cornered. With little support for their defense of the status quo among traditional constituencies, they can only appeal to hard-core progressives who oppose anything that appears corporate or conservative. But those folks are a small contingent among a vast majority of people who have greater concerns such as ensuring that their kids get a high-quality education and keeping their taxes low enough so they can actually survive in tough economic times. Then there is the fact that younger rank-and-file members in the two unions are as supportive of test-score based evaluations and ending tenure as many school reformers. As a result, the NEA and AFT will have to offer their own tepid versions of reform and accede to all but the most-radical forms. Wisconsin’s NEA affiliate already accepted that reality earlier this year when it announced its own support for some form of performance-based pay and evaluations based on student test score data. Another example can be seen with the weak sauce that is the Illinois plan.

This is early, of course, and the NEA and AFT will fight even harder against reform. And now that it has lost Wisconsin and Florida, the NEA will definitely fight New Jersey Gov. Chris Christie’s proposal to overhaul teacher evaluations and end the near-lifetime employment benefits that come with tenure. Nor will this make centrist Democrat reformers comfortable; after all, their proposals would do as much to further weaken teachers as anything proposed by Walker and other conservatives (and they know it, even if they don’t want to publicly accept that logical conclusion). But teachers unions have less influence than they had a decade ago — and less leverage to beat back reforms from either school reformers or fiscal conservatives. The nightmare scenario isn’t likely to happen.