Two More Thoughts on Education This Week: The John and Arne Accountability Show 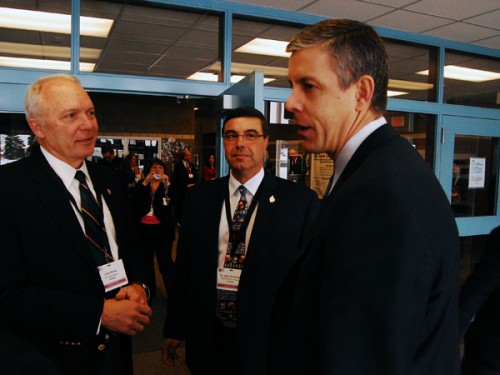 John Kline’s Policy Obtuseness: As your editor, I could point to the policy disconnect between House Education and the Workforce Committee Chairman John Kline’s declaration yesterday that “it is time we reconsidered the role of the federal government in our schools”, and his effusive praise later in the day for efforts by his congressional Republican colleagues to expand the reach of federal policy by reviving D.C. Opportunity school voucher program. But that’s just too easy and besides, on the latter, he’s right to support it. Instead let’s consider the revisionist history of the role of federal policy being parlayed by Kline and some of the majority staff on the committee and how it doesn’t square with reality.

From where Kline sits, the No Child Left Behind Act (and the Elementary and Secondary Education Act of 1966, upon which No Child is built) has done little more than burdened school districts with regulations that restrict them from improving education while also wasting federal money. From the perspective of some less-thoughtful movement conservatives, suburban Republicans such as Kline, and even some libertarians, this narrative is incredibly simple and seductive because it proclaims that American public education was in great shape before the feds appeared like gremlins in a World War II fighter plane. If only the federal government would just get out of education, the districts would successfully educate the kids in their care.

But as with so many ideologically-driven simplifications, it isn’t exactly so. For one, the federal government has long had a role in education policy beginning with the Morrill Act of 1862 — which helped foster the formation of much of the nation’s public universities — and formation of the Office of Education (a predecessor of what is now the U.S. Department of Education) five years later. That role expanded first expanded in 1914 with the Smith-Lever Act (which created cooperative extension outfits within land-grant universities) and in 1917 when the Smith-Hughes Act required high schools to create vocational education programs (and thus fostering the development of the comprehensive high school model).

By 1946, the federal role was expanded thanks to the National School Lunch Act, which funded school meals and fostered the creation of the free- and reduced-lunch economic standards used today in measuring poverty in schools. The Impact Aid Act of 1950 would further expand federal policy and funding by requiring national funding of schools in areas in which feds were buying property and taking it off the tax rolls. Then came the Cold War-prompted National Defense Education Act of 1958, which fostered the first major wave of standardized testing in the 20th century; by 1966, nearly all high school students were taking some form of standardized aptitude test, versus just one-third of students in 1958, according to a 2006 report by the Institute for Defense Analyses. Then came ESEA, the Family Educational Rights and Privacy Act of 1974 (which kept student data under lock-and-key) and the Individuals with Disabilities Education Act of 1975 , which expanded special education funding. And during the 1980s, the Reagan Administration’s A Nation At Risk report would further the federal role (even as congressional Republicans at the time gave lip service to scaling things back).

But the story is a mixed one. Federal policy and regulations have been on a slow and steady expansion and it has certainly been a mixed blessing. From FERPA rules that can complicate the efforts of states to build effective data systems, to unclear “supplement-not-supplant” rules that restrict the use of Title 1 dollars from uses for innovative instruction and curricula, the feds have spent a lot of the over the past decades on compliance. But the very states and districts Kline argues will do well all by themselves are also to blame. As education lawyer Melissa Junge pointed out this morning at a Title 1 conference held by the Center for American Progress and the American Enterprise Institute, a district could actually propose a program that would meet guidelines and still get stonewalled by state education departments interpreting federal supplement-not-supplant rules differently from U.S. Department of Education guidance. As I reported in A Byte At the Apple: Rethinking Education Data for the Post-NCLB Era, the penchant for states to tie up their own dollars in categorical programs and the byzantine structures of education governance also means even more compliance-based regulations.

Congress should ditch the compliance models within federal education policy. It would help spur some innovations. But let’s also be clear about this: One can get rid of all the federal compliance rules and school districts would still complain of burdens, largely because of what states do and their own penchant for perpetuating bureaucracy, waste and ineptitude. As the Center for American Progress pointed out earlier this year in its own report on educational efficiency, the spending done by districts rarely correlate with high-quality results.

On the other hand, what hasn’t been in place over the past decades until now is what really matters: Holding districts and states accountable for spending money wisely and improving student achievement. The lack of accountability was a concern for Robert F. Kennedy when ESEA was initially passed in 1966; it became  a greater concern as Southern governors, big-city mayors and Reagan administration officials who helped foster the school reform movement once they realized that state and federal dollars were going down proverbial drains.

Through the AYP provisions, No Child finally began exposing the systemic problems of school districts — especially suburban systems long-considered to be high-performing — and fostering the teacher quality reforms, curriculum standards overhauls and school choice initiatives Kline claims he supports. Because No Child is the final iterations of what states began doing in the late 1980s, the law (along with the Race to the Top effort) also gives reform-minded governors the tools they need to push through reforms that would otherwise be resisted by suburban districts and teachers unions. As a group of authors led by No Child architect Sandy Kress points out in the Harvard Journal on Legislation, AYP has helped spur efforts that are improving student achievement. The gains aren’t enough — systemic reforms are critical to closing achievement gaps for the long run — but AYP is one of several elements of federal education policy (alongside the competition model ushered in by Race to the Top and family engagement efforts) that should be kept in place and expanded.

One wishes Kline would offer such nuanced arguments. But he doesn’t. He hammers upon accountability that actually works and ignores the compliance mentality that is actually worth eliminating. But then, Kline would actually have to spend some time studying the history of federal education policy.

The Blueprint for Ending Accountability: During Dropout Nation‘s interview with U.S. Secretary of Education Arne Duncan, his point person on reauthorizing No Child, Carmel Martin, declared that AYP ” just doesn’t have any credibility”. Of course, it doesn’t help when the agency releases such questionable estimates as this week’s proclamation that four out of every five schools will be considered academically failing under the provisions. But I’ll let that go. What Duncan and the Obama administration want to do is replace AYP with a model that won’t hold any schools accountable.

Under the administration’s blueprint for reauthorizing No Child, AYP will be replaced with a series of measures focused on tracking whether schools are getting all students ready for college and career. But instead of subjecting all schools receiving Title 1 funds to stringent accountability, it would be limited to the five percent of the nation’s schools (about 5,000 dropout factories and failure mills) that are abject failures. The merely poor-performing schools — including suburban districts that are failing to properly educate poor and minority kids — would be listed, but largely be left alone.

But what if those districts continue to fail in educating poor and minority kids for three years or more. that are failing poor and minority students? In theory, it will be placed in the hands of state education departments. But those agencies barely do a good job of holding districts accountable as is. In fact, No Child already gives states a set of prescriptive measures to pursue — including turnarounds and shutting down schools — to fix perpetual academic failure. But currently many states rarely force districts to undertake such drastic measures.

Certainly one can understand why Duncan and Obama would propose this. Suburban districts have been complaining that their failures are being exposed. The fact that states spent so much time slowly putting AYP in place and now ratcheting up the standards for academic success is also creating havoc. But as a former school system boss, Duncan should know by now that districts will do as much as they can to avoid taking responsibility for student achievement and failure. Just replacing AYP — a system that has worked well, if not perfectly — for nothing is not good enough.

Let’s be clear: Duncan and the Obama administration have largely done a fine job in pushing for systemic reform. But in pushing to gut AYP, they are essentially undercutting their own efforts. It’s time to sit down and rethink this part of the blueprint. And perhaps, just leave No Child alone.

Voices of the Dropout Nation in Quotes: Title I Edition