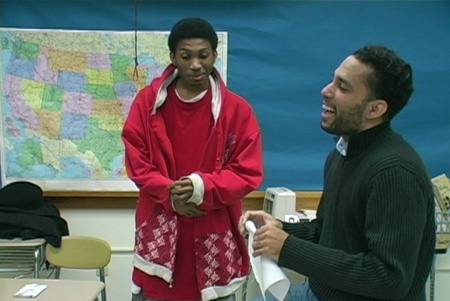 Earlier this week, Achieve Inc. released a report that revealed that just 20 states and the District Columbia require students to be taught (and complete) a high-quality curricula that prepares them for higher education and career success. This result, along with the other woeful stats, merely confirms the results from ACT’s report last month that showed that a mere 38 percent of students taking the exam were reading (and were educated) at the levels set by the recently-created Common Core standards.

Yet the discussion this week still isn’t about the need to ensure that every child gets the college prep education they need, but about the Harvard ed school’s report declaring that such a goal is unnecessary – and that we should subject poor and minority kids to low expectations that will continue the nation’s education crisis. As I argued last week, the report and its authors (including Ronald Ferguson and Robert Schwartz) implicitly declare that it is better to dumb down curricula, instruction and expectations (and thus continue educational malpractice) than to improve the quality of education currently provided to all students in America’s traditional public schools.

The most-sensible argument (if not one with which I fully agree) is advanced by Jeremy Ayers of the Center for American Progress that there needs to be high-quality standards while allowing for separate collegiate and technical tracks. Where Ayers falls apart is in his continued advocacy for separate collegiate, technical and “gap year” track. For one, most high school students don’t know what career paths they want to take (and often won’t know until they are in the working world). More importantly, the tracking approach also continues an outdated model of education (including comprehensive high schools) that has been one of the underlying causes of the nation’s education crisis. It is better to offer one single college-prep curricula track that prepares them for any opportunity they choose after high school.

Some of the other polemicists simply defend the report’s underlying notion. There’s Joanne Jacobs, the author of Our School (which oddly enough, showed that poor kids attending an urban charter school can actually rise to high expectations), who argues in a series of pieces on her eponymous site that “we do need to offer realistic pathways” for struggling students that doesn’t involve college prep education. What she fails to consider is that the reason why they are struggling in the first place: Low quality instruction and abysmal curricula throughout their times in school, especially in the early grades.

Then there’s Liam Julian, who declares that the report is a call to make “real change”. Actually, as Julian also notes, this argument is part of the same war over the direction of American public education (should all kids get high-quality education or just some kids, with immigrants, and racial and ethnic minorities being deemed unworthy of such learning) that has gone on since the rise of the high school movement in the 1890s. More importantly, Julian fails to consider that higher education is more than just Stanford or UCLA. It includes community colleges – which provide both two-year academic and workforce training for most of America’s undergrad students – technical schools that train high-skilled blue-collar workers and apprenticeships run by manufacturers and trade unions. The strong reading, math and science skill needed for success in obtaining a bachelor’s degree is also needed for success in those schools.

Right now, students who would struggle in Harvard or even at SUNY Albany are also going to struggle in community college and other forms of higher education. The fact that just a quarter of community college students graduate with an associate degree (or transfer to four-year colleges), and that many of those same students would fail to complete trade school or not even qualify for an apprenticeship also means that the need for high-quality education is more critical than ever.

Here’s the thing that Jacobs and Julian (along with Ferguson, Schwartz and others in the low expectations crowd) fail to realize: Expectations matter. If teachers and administrators think that poor and minority kids aren’t capable of college prep education, then they won’t actually put any work into even the most-basic instruction and curricula. They won’t develop intense reading remediation for kids in the early grades. They won’t take up proven methods for improving instruction or curricula, or even suggestions such as those from Dropout Nation Contributing Editor Steve Peha. If a teacher doesn’t believe the students in your class are capable, than you won’t bother elevating their instruction, either for the kids or for themselves.

What “realistic expectations” generally mean in the classroom in 2011 (and for most of the previous century) is shortchanging kids on reading, math and science. This happens throughout American public education, including in middle class suburban classrooms (which is why the No Child Left Behind Act’s AYP provisions exist in the first place). The difference is that many middle class families can use Sylvan or Kaplan (or even their own tutoring) to overcome low expectations; it is difficult for even the most-vigilant poor families to do the same.

“Realistic pathways” in schools means ability tracking and denying poor kids entree into the college prep courses that teachers and guidance counselors often reserve for kids they think can learn. It means magnet schools that don’t actually reflect any sort of diversity. It means the lack of school choice in any form.

“Realistic” simply means denying students the core knowledge they need to be thoughtful, productive, knowledgeable citizens capable of participating in American society. This isn’t to say, as the education-as-democracy crowd argues that educated students will always make the best decisions (or even preserve democracy). It means that they can actually carry on conversations with anyone in any station of life at any time in their lives.

These low expectations are the critical reason why one-third of all American fourth-graders – and half of black and Latino fourth-grade students – read Below Basic proficiency. It is why boys of all racial, ethnic and economic backgrounds trail their female peers in reading and in graduating from high school. It is why ed schools do such a poor job of recruiting and training aspiring teachers – especially those heading for urban classrooms. Low expectations are why we have a dropout crisis and an education crisis today.

Certainly Jacobs, Julian and Ayres are otherwise talented and thoughtful writers and analysts on education issues. But they are absolutely wrong about this. They fail to consider that by the middle of this century, blacks and Latinos will make up the majority of voters, workers and citizens.  A poorly-educated populace endangers the nation’s economic and social future.

More importantly, they don’t have to think about the consequences of their arguments on actual human lives; after all, the kids involved don’t live in their neighborhoods and aren’t a part of their economic, social or racial communities. For those of us who are part of these communities, it absolutely matters. Especially so in the black community, in which poor, middle class and wealthy sit next to one another in the pews and get haircuts at the same barber shop.

For me, this is all too personal. I admit it. These kids look like me, even though they may not necessarily share my skin color or racial background. Chances are that I attended school with their parents or people who are just like them. And while I am a second-generation member of the economic middle class (and thus, been largely insulated from the worst life can offer), these kids share the same economic background as my grandparents.

We all need to cast aside low expectations in education. We must fully embrace the idea that all children can learn, both in thought and in deed. And it is high time to ensure that every child gets a challenging, rigorous, high-quality college prep education that allows them to choose any path to successful lives, be it college, technical school or even apprenticeships. Second best – and third rate – isn’t good enough.