Disrupting the Structure of Education: New Orleans and the Hollywood Model

RiShawn Biddle
3 Comments on Disrupting the Structure of Education: New Orleans and the Hollywood Model 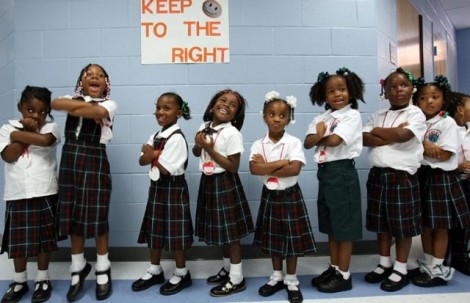 What if every school was a charter school? Or a private school? It should happen in the Big Easy -- and elsewhere. (Photo courtesy of colorlines.com)

As much as defenders of traditional public education complain about additional funding and efforts to expand charter schools, the vast amount of attention and funding in school reform is focused on overhauling traditional school districts. reforming traditional school districts. From the $3.5 billion in funding from the federal School Improvement Grant (SIG) program to much of the funding for Race to the Top, the real action remains in saving a model of providing public education that have proven to be inefficient, allows opponents of reform to stubbornly resist any change and captured by political and regulatory structures that benefit the National Education Association and the American Federation of Teachers over the kids that are supposed to be educated.

But what if the traditional school district model was abandoned altogether? This could be a possibility in New Orleans, where the state-controlled Recovery School District — which took over schools once ran by the woeful Orleans Parish school district after Hurricane Katrina — is putting itself out of business. What could happen in the next few years could serve as the first step in developing a form of what I call the Hollywood Model — essentially getting rid of school district bureaucracies and allowing individual schools to operate akin to Hollywood producers, actually handling actual classroom instruction.

The official plan, according to Louisiana’s school superintendent, Paul Pastorek is to allow the 33 schools to go back under the Orleans Parish school district (which ran most schools in the Big Easy until Katrina) or choose to be under the watchful eye of the state. But there is a catch: New Orleans Parish can only gain oversight over the soon-to-be-former Recovery district schools if they govern in a “21st century manner”, that is, the district will only serve in an oversight role similar to what the state would do instead of operating schools. The Recovery District schools, on the other hand, will operate on their own. Essentially, the Orleans Parish wouldn’t be able to go back to its old ways, poorly managing schools, tolerating internal corruption and failing students and taxpayers alike.

It isn’t that Orleans Parish would be in any position to do any more damage or take on operation of these schools. The district, once a sprawling bureaucracy of 103 schools, now operates just seven; given that it authorizes and regulates seven charter schools on its own, it doesn’t have the capacity to oversee the Recovery District schools. So it is more than likely that the schools will end up becoming charters and fall under state oversight.

NOLA is already several steps in the midst of the Hollywood model. After all, public charter schools (which operate independently of any central district) enroll 57 percent of all students and account for 75 percent of all schools in the Big Easy. Converting another 33 traditional schools into charters wouldn’t exactly put a strain on the system. But it would force Louisiana officials to consider its own capacity for regulating so many schools from Baton Rouge. The biggest obstacle in abandoning the school district model remains the reality that most state education agencies are ill-equipped to manage their own operations, much less provide wide oversight over tens and hundreds (much less thousands) of individual schools. The lack of strong governance is one complaint lodged against the Recovery District by those New Orleans residents who remain skeptical of a school choice model of education.

For the schools themselves, the question is how to provide those very services — transportation, school lunches and building maintenance — that would otherwise be provided by a central district — especially since Orleans Parish (which would otherwise handle those functions under my original thesis) wouldn’t be able to do so. Once possibility: Groups of schools teaming up and contracting out those services to outside vendors, something that think tanks such as the Reason Foundation (with help from Deloitte Consulting’s Bill Eggers) have floated in discussing how to improve traditional district operations. Another is to bring in more charter school operators such as the Knowledge is Power Program and Green Dot Public Schools; but that would also lead to complaints that public education is becoming a private business (even though education has always been as much a business as a means of building the minds of people).

What happens in New Orleans may actually reshape what happens in federal policy. The Obama could abandon the emphasis on school turnarounds — which like those in the private sector, succeed only a fifth of the time (at best) — and focus on developing new structures for educational governance and foster charters, vouchers and other kinds of schools. The administration could even take some Title I funding and actually put it into efforts that will elevate families to their proper roles as kings and lead decision-makers in education.

Ultimately, what will happen in New Orleans with the end of the Recovery District will be interesting to watch. After all, we already know that the traditional public school district is obsolete and not worth preserving as a model for educating our children. Now, we must replace it with a model that works for all children.