At the State Level School Leadership This is Dropout Nation

This is Dropout Nation: A Southern Decline

RiShawn Biddle
1 Comment on This is Dropout Nation: A Southern Decline 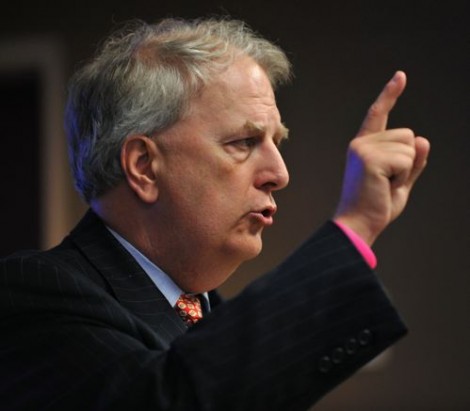 Neither Roy Barnes or his possible future colleagues are doing much on school reform.

Five decades ago, the states below the Mason-Dixon line spurred the first modern major efforts to reform American public education. Concerned about low educational attainment, especially among its rural and poor black and white students, governors such as governors such as Lamar Alexander (a future U.S. Senator) and future presidents Bill Clinton and George W. Bush (along with state chambers of commerce), began the first moves towards determining the sources of the problem. Their work, along with the publication of A Nation at Risk, spawned the No Child Left Behind Act, the teacher quality movement, efforts to improve curricula and the standards and accountability movement.

These days, however, the same sort of urgency that drove southern governors of previous generations no longer seems to exist. This is evident in Dropout Nation‘s observation of the 11 states defined by the National School Boards Association as the southern region. A few states are exceptions, including Tennessee (winner in the  first round of Race to the Top, and home to Memphis City Schools with its $900 million teacher quality effort funded by the Bill & Melinda Gates Foundation), Florida (whose efforts on school data systems, vouchers and tenure reform are well-chronicled),  Arkansas (home to Jay P. Greene and an expanding charter school movement) and Louisiana (a  path-leader in teacher quality reform and charter schools).

The rest are lackluster. In Georgia, a state whose problems have been documented by your editor, none of the Democratic candidates for governor support school choice going beyond charter schools. This includes, most shockingly, Commission on No Child Left Behind honcho Roy Barnes, who as Georgia’s governor from 1999-2002, angered teachers unions by successfully passing a measure that ended tenure; he has spent more time apologizing to teachers’ union votes this time around. The Republican candidates, on the other hand, are too busy appealing to suburban Atlanta interests (and, given that the current governor, Sonny Perdue, beat Barnes by appealing to teachers unions) to actually discuss education.

It isn’t much better in the rest of the southern states. The efforts by Alabama’s governor, Bob Riley, to make charter schools a reality in the Cotton State fell apart thanks to the state legislature, who ignored the prospects of Race to the Top money to accede to the demands of the National Education Association’s state affiliate. In South Carolina — a state whose educational attainment has been abysmal at best — the insolvency of the NEA affiliate there has done little to spur any real action on school reform.

Virginia Gov. Bob McDonnell may have gotten a weak charter school expansion bill passed and brought in a noted reformer, Gerald Robinson, to office. But Virginia politicians and educational leaders — especially in Northern Virginia — are too self-satisfied with the status quo (and with the position of being better than D.C.), even if there is growing evidence that the state is falling behind. Texas Gov. Rick Perry and his colleagues are doing little more than faux sparring with the federal government over states rights in education and tolerating alleged fraud; the Lone Star State, once the standard-bearer for aggressive school reform, is now a north star for defenders of traditional public education.

The lack of urgency on education is a pity for southern state  families and, ultimately, the children to which they trust schools with their educational (and economic) destinies. Because changes in demographics are a tocsin for more action, not less.

Within the past six months, the Southern Education Foundation has proclaimed what most of us who once lived in Georgia and Mississippi already know: The American South (as defined by Southern Education, a group of 15 states including Kentucky) is now one of two regions (the other being the West Coast) where blacks, Latinos and other minorities make up a majority of school enrollment. In 1998, whites made up 56 percent of school enrollment (then at 13.9 million) in the 11 southern states surveyed by Dropout Nation. By 2007, minorities make up 51 percent of the 15.4 million students in those states. White enrollment actually declined by 230,321 students even as other population groups (including Native Americans) increased their population counts.

Meanwhile the population of poor students — in this case, students who live in what Southern Education calls “extreme poverty” or live 50 percent below the federally-defined poverty line — has also become a concern. Forty-two percent of the 5.8 million children considered in extreme poverty live in the American South, a wider share than any other region in this country. This matter — as much a consequence of the growth in the Latino populations as is a consequence of the South’s legacy of poverty — can only be addressed effectively by improving the quality of teaching, curricula and schools (including fostering the development of more high-quality charters and private schools) as well as by making parents the kings (and leading players) in all education decision-making. 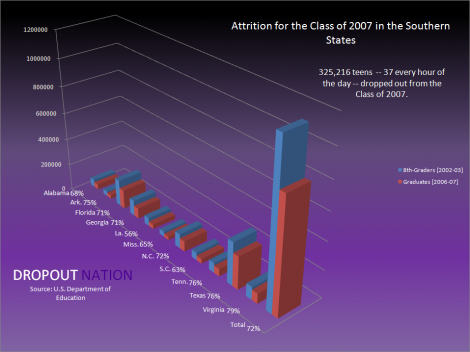 Once the drivers of school reform, southern states are falling behind.

But this isn’t happening — and the results are clear from the graduation rates for the Class of 2007 (based on eighth-grade enrollment) and National Assessment of Educational Progress data. Although the 72 percent graduation rate for the region is better than the national average, it hides some glaring failures. Four states — Louisiana (56 percent), South Carolina (63 percent), Mississippi (65 percent) and Alabama (68 percent) — are at giant dropout factories. Many of the others aren’t much better: Florida and Georgia each share a graduation rates of 71 percent  (slightly below the regional average);  North Carolina (72 percent), Arkansas (75 percent), Tennessee (76 percent), Texas (76 percent) and Virginia (79 percent) are doing better than average. But the news isn’t good at all: Some 325,216 students from the collective class of 2007 — or 37 students every hour — dropped out.

Meanwhile the NAEP reading data is rather sobering. Georgia may share the same graduation rate as Florida, but not likely for long. Thirty-seven percent of Peach State fourth-graders read Below Basic on the 2009 NAEP versus just (an almost as woeful) 27 percent of their Sunshine State peers. Meanwhile the rates of functional illiteracy for fourth-graders in the other states aren’t much better: Thirty-seven percent of fourth-graders in Tennessee and Arkansas read Below Basic proficiency; for Texas and North Carolina, it is 35 percent; 38 percent in Alabama and South Carolina; a staggering 45 percent in Mississippi, and one out of every two students in Louisiana.

Just 26 percent of Virginia’s fourth-graders read Below Basic, the best in the region. But the rate of functional illiteracy has declined very slowly in the past decade versus other states: Four years ago, for example, Virginia’s Below Basic rate for its fourth-graders was four points lower than that of Florida, today, it’s only one percent ahead. And this has much to do with the complacency of Virginia’s political and educational leaders as it does with the hard work Florida’s leaders — including former Gov. Jeb Bush and his predecessor, Lawton Chiles — have done to improve education for its children. Given the lack of strong reform-minded players (newspaper editorial pages, parents groups, politicians, school reform think tanks, and activists), Virginia (along with Texas) will likely fall behind Florida (and possibly, Arkansas) in the coming decade.

For a region that is increasingly the most-dominant in the nation, the unwillingness to fully embrace the school reform mantle will likely wreck havoc on the national effort — especially as states and the federal government expand their critical role in education policy decision-making. And right now, given the stakes for all of our children, this is no time to whistle Dixie on school reform.