School Districts in Trouble This is Dropout Nation

This is Dropout Nation: Where the Boys Don’t Go in KC’s Sister City

RiShawn Biddle
Comments Off on This is Dropout Nation: Where the Boys Don’t Go in KC’s Sister City 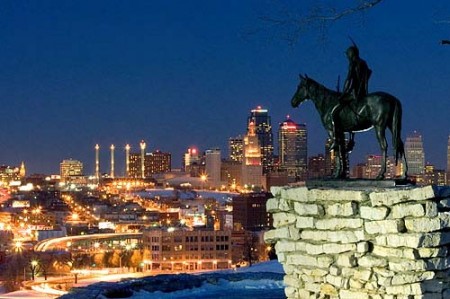 The closing of 29 (of 61) schools by the Kansas City (Mo.) school district has captured the attention of the nation. But across the state line in the Big KC’s sister city that shares the same name, a more-fundamental crisis looms. It is one that both cities share with each other — and with other urban school systems across the nation: The young men, no matter their skin color or ethnicity, don’t graduate.

At the beginning of the 2003-2004 school year, young men made up the slight majority of Kansas City’s graduating Class of 2008. This is typical in many districts. But five years later, according to data from the National Center for Educational Statistics, the numbers reverse. Young women, no matter their race or ethnicity, make up the majority of seniors. Among blacks in the Kansas City district, young women account for a slight majority over young men in the Class of 2008; but among whites and Latinos, the young women outnumber the young men by a 3-to-2 ratio. 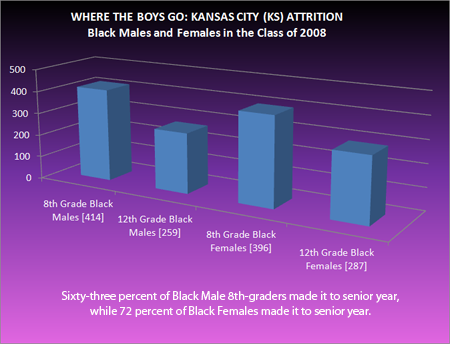 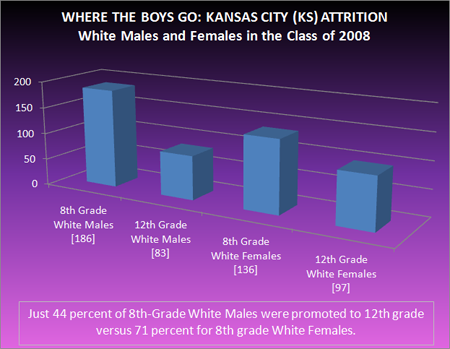 The white males do even worse. And...

Promoting power rates for young black men are, as one would expect, not high. But with 63 percent of young black male 8th-graders reaching senior year of high school (compared to 72 percent of their female counterparts), at least more than half are making it through. Among young white men, the numbers are even worse: A mere 44 percent of them made it from 8th grade to senior year versus 71 percent of young white women. And only 49 percent of the district’s Latino male 8th-graders were promoted to 12th grade; the promoting power rate for Latino females was 71 percent. 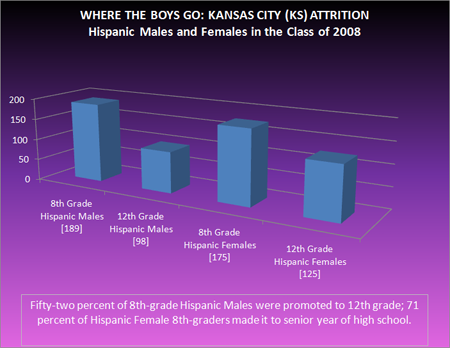 the Latino males do little better.

With less than 60 percent of the young men in the Class of 2008 actually making it from 8th to 12th grade, one wonders how so few are making it to graduation. The answer seems to lie in several factors common across urban districts (and even many suburban ones). This includes over-diagnosis of learning disabilities (13 percent of young black men in the district are labeled as some sort of special ed case versus a mere 7 percent of young black women); and the overuse of harsh school discipline (15 percent of Kansas City’s white males were suspended during the 2005-2006 school year, according to the U.S. Department of Education’s office for Civil Rights database, compared to a similarly atrocious 9 percent of their female schoolmates). The latter may play less of a role because the out-of-school suspension rate of 13 percent for all females, while lower, is far too high anyway.

The consequences can be seen in little Kansas City’s demographic and economic statistics: Seventeen percent of the city’s residents are economically impoverished; only 10 percent of Kansas’ citizens (and 13 percent of U.S. citizens) report poverty-level incomes; 18 of Kansas City households are headed by an unmarried woman (versus 8 percent of the U.S. population). But these consequences can be felt nationwide, especially as higher educational attainment becomes key to economic sustainability.

The issues facing young women, especially young black women (who are more likely than the general population to become head of households and never marry) cannot be ignored; the likelihood that young women are being under-diagnosed for learning disabilities must always be kept in mind. The promoting power rate for Kansas City, while better in some respects than its more-populous neighbor, still means that one out of every four children are dropping out. But if the nation wants to stem the dropout crisis, it needs to work on improving academic achievement among young men. Working in little KC wouldn’t be bad place to start.