This is Dropout Nation Urban Decay 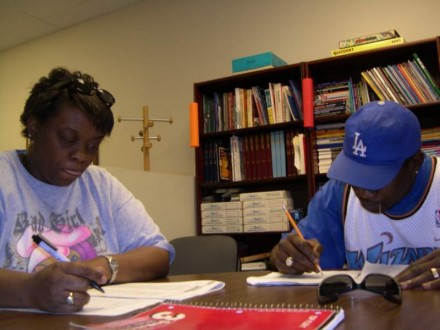 The price of neglect: James and Julie Johnson, shown in 2005, are among the thousands who have dropped out of Indianapolis Public Schools for more than four decades.

As chronicled here and elsewhere, Indianapolis Public Schools exemplifies the problems of the nation’s worst public school systems. This Midwestern district suffers all the faults of urban districts that aren’t involved in any reform effort, from bureaucratic incompetence to political intransigence to high levels of teacher absenteeism.

Chart 1: A portrait of failure -- Poor instruction, lackluster curricula and terrible leadership from schools and families alike contribute to a graduating class that barely makes it out.

But IPS’ failures can be best summed up through its woeful graduation rates. The district remains home to one of the nation’s most-comprehensive concentrations of dropout factories, with all but one of its high schools (a specialized high school) graduating fewer than 60 percent of its students. The graduation rates for black and white males (based on 2006 data) are tied with Detroit’s abysmal district for the worst. But as seen in chart 3, the five-year Promoting Power Rate (or Balfanz Rate as Dropout Nation calls it after its creator) for females — especially, oddly enough, white females — is almost as atrocious.

Chart 3: Promoting Power Rates for the Class of 2008

With the school district’s superintendent, Eugene White, entering a rare fifth year into the job as its chief executive, one wonders if IPS will eventually go the way of New Orleans. Because there are 10 other school districts within Indianapolis, this may not happen. But the State of Indiana may just end up taking over the district anyway.

Either way, it’s the children who suffer, not only in being denied the fulfillment of their educational and economic destinies while in school, but afterwards, as many make their way through Indiana’s prisons, end up on welfare rolls, and, in many cases, may not even make it past 30. It’s high time that IPS and other districts are either fully revamped or completely shut down. These children deserve better. 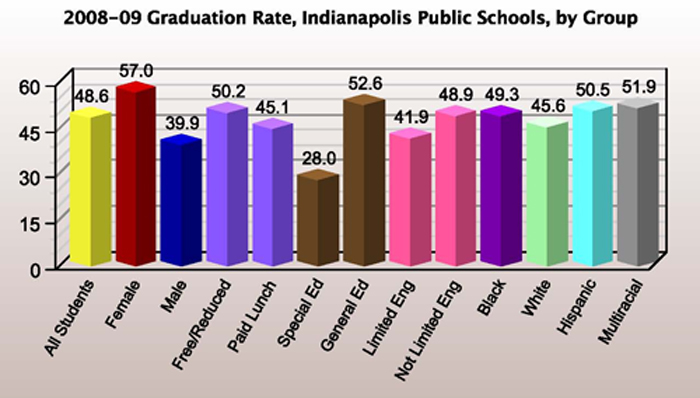 The Dropout Nation Podcast: The High Cost of Teacher Pay