Your editor will start with this one reality: That the Trump Administration’s proposed budget for the Department of Education and education programs, along with the rest of the 2018-2019 spending…

Your editor will start with this one reality: That the Trump Administration’s proposed budget for the Department of Education and education programs, along with the rest of the 2018-2019 spending plan,  is dead on arrival. Put simply, its budget is just a waste of good paper.

At the same time, while the Trump Administration’s budget will not gain passage, it deserves some consideration. Why? Because the specific program eliminations proposed exemplify the regime’s lack of concern for the futures of poor and minority children — and how their disdain will be made manifest even without congressional approval. While the programs will likely remain in place, the administration and its education boss, Betsy DeVos, have clearly shown how they will decimate them and ultimately, harm the children for which they are charged with defending.

As I already noted briefly yesterday, none of the proposed reductions and program shutdowns will pass congressional muster. This was demonstrated last year when House and Senate appropriators tossed out the Trump Administration’s 2017-2018 spending plan on which this year’s budget is mostly based. Roy Blunt, the Missouri Republican who chairs the Senate’s appropriations subcommittee on education, has likely killed the regime’s proposal to voucherize $500 million in Title 1 funding before it was printed on the page. Other programs such as Promise Neighborhoods, one of the Obama Administration’s signature initiatives and one based off Geoffrey Canada’s highly successful Harlem Children’s Zone, will likely stay alive.

The proposed elimination of the $65 million-a-year Native Hawaiian and Alaska Native education programs, which supports culturally-based curricula and instruction for two groups of Native children, won’t make it past either Alaska Sen. Lisa Murkowski or Oklahoma Rep. Tom Cole, both of whom are strong defenders of those programs and are lead congressional appropriators. That a good number of Congressional Republicans need American Indian, Alaska Native, and Native Hawaiian votes to keep their jobs — especially in an midterm election year in which Republicans are likely to lose some of the 31 seats that incumbents are vacating so far and Trump’s unpopularity looms large — means that Native education programs will likely remain.

The administration’s proposal to gut TRIO, the collection of programs geared toward helping Black, Latino and Native children attain higher education as well as enter careers in areas such as science, have strong constituencies that Congressional Republicans are loathe to fight head on. That one of those programs, the Ronald E. McNair Post-Baccalaureate Achievement Program, is named after the African-American astronaut who died in NASA’s botched launch of the space shuttle Challenger, makes it even harder for even the most hardcore deficit hawk to cut off. Meanwhile the presence of Teach For America and its alumni, along with Catholic Charities and other groups, will also probably ensure that Trump’s plan to shut down AmeriCorps, the national service program outside of the Department of Education’s purview, never becomes reality.

What makes the Trump plan even less likely to become reality is the inability of Congress itself to pass a full-year budget. Thanks to the one-month spending plan passed last Thursday, the federal government is still spending at levels set for the 2016-2017 fiscal year. The two-year budget outline passed last week by the Senate and House also lays out spending increases for education as well as for other programs that aren’t Medicare, Medicaid, and Social Security (and theoretically, protected from reductions in spending increases and actual dollars), thus rendering the administration’s plan moot. Add in the Trump Administration’s overall lack of leverage with Congressional Republicans and it becomes clear that its spending plan is already in the trash.

But as your editor has noted, the budget does deserve some attention, and not because it has a snowball’s chance in Hades of passage. The budget deserves attention because it signals what the Trump Administration will do to the programs — and ultimately to poor and minority children — regardless of congressional action.

After all, while the House and Senate are charged with passing budgets and setting spending priorities for the federal government, the Occupant of the White House and his appointees actually run the day-to-day operations. Thanks to executive orders, administrative rulemaking, interpretation of statutes on the books, and staffing decisions (including the selection of temporary and permanent political appointments as well as civil servants who do the real work on the ground), the administration has plenty of leeway to do what it wants.

Over the past year, the Trump regime has made clear in word and deed that it is engaged in what can best be called low-grade ethnic cleansing. The move last September to end Deferred Action for Childhood Arrivals and put 780,000 undocumented immigrant children, young adults and teachers on the path to deportation, along with the various bans against entry of Muslims and others from several nations into this country, a proposed restrictions on legal immigration (which would advance the administration’s goals of a majority-White nation), and a proposal to replace food stamps with boxes of canned goods and less-than-fresh produce are just the most-visible examples of this bigotry-driven policymaking.

Other moves include efforts at the Department of Homeland Security’s ICE to deport even undocumented emigres who most would call good citizens in their communities; Customs and Border Patrol officers kicking water jugs left for migrants crossing the U.S.-Mexico border (and let them die of thirst); moves by Attorney General Jeff Sessions to not enforce consent decrees against police departments engaging in systematic brutality and corruption against poor and minority communities; and the move last month to allow states to implement work requirements for Medicaid recipients which make it easier to kick off the poorest Americans (including Latino communities as well as rural White people).

Overseeing the administration’s war against Black and Brown children on the education policy front is DeVos and her crew at the Department of Education. They have worked seriously and diligently at fulfilling the regime’s mission against the most-vulnerable. 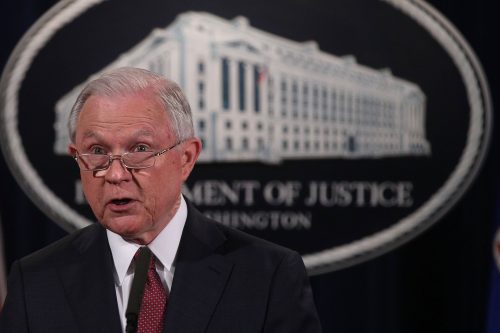 Attorney General Jeff Sessions isn’t the only collaborator in harming children that reformers and others must fight.

Dropout Nation has already documented how DeVos and her crew have slowly rolled back the Obama Administration’s efforts to stem overuse of out-of-school suspensions and other forms of harsh school discipline. This has included issuing guidance that effectively stops Office for Civil Rights investigators from looking at three years of past complaints to prove that a district or other school operators has engaged in systematic overspending of Black, Latino, and Native children, as well as the hiring of Hans Bader, a vocal opponent of school discipline reform.

But an even bigger play came late last year when the agency gave buyouts to 16 investigators and other staff at OCR. [DeVos proposes to eliminate another 34 positions in 2018-2019.] By reducing staff levels, DeVos and her team are ensuring fewer investigations into civil rights violations of all types. After all, an agency can’t probe into complaints if there isn’t enough staff to do the work. Add in likely plans to toss out existing complaints by restricting the level of investigations that can be done, and suddenly, districts and school operators will know that they can abuse and neglect vulnerable children with impunity.

How this can play out can be seen in the Brentwood district in New York, which is the subject of a lawsuit filed last year by the American Civil Liberties Union on behalf of three undocumented immigrant youth. In that tort, the civil liberties outfit alleges that the district conspired with Suffolk County’s police department and ICE  in identifying, suspending, detaining and deporting undocumented immigrant students for allegedly being members of MS-13, allegations that immigration cops could not substantiate in court. An attempt to file a civil rights complaint with OCR against Brentwood alleging systematic discrimination would likely be shortcircuited, both because of the lack of bodies to investigate the claims and because investigators can’t look at previous complaints against the district.

What is happening at OCR is a preview of what will happen at other programs run by the agency — and the administration’s proposed budget makes that plain to see. Expect to hear more news about staff cuts and buyouts, especially in the offices that oversee Title I, Native education programs, and even TRIO. With fewer employees on board, especially in strategic positions critical to administrating those efforts, there will be delays in things getting done. Which will, in turn, affect real live children and young adults.

There are other moves DeVos and company can make in sustaining the administration’s war against Black and Brown children. This includes crafting administrative rules that can require districts and other school operators to cooperate with ICE in the latter’s efforts to deport undocumented immigrant children and their parents, as well as withhold funds to districts such as Chicago Public Schools which are refusing to cooperate with deportation attempts. It would not be a shock if folks at 1600 Pennsylvania and the Department of Justice are already pressing for such rulemaking to become reality.

Even those few budget proposals that may make sense in theory cannot be trusted, both because of the administration’s mission against minority communities as well as the incompetence within the regime. The proposed elimination of some 50 appointments (out of 150) can make sense, especially given the 27 “confidential assistants”, “special assistants” and other mandarins that are supposed to work directly for DeVos and her chief of staff, Josh Venable. But given the rather public failure to release on time the results from the latest edition of the National Assessment of Educational Progress, how can anyone trust that DeVos and her team knows which positions should be eliminated?

[Of course, many of those spots targeted, along with others such as the 14 on the Commission on Presidential Scholars (along with its executive director) have gone unfilled for months. Because no decent person wants to be associated with this regime.]

You can only trust that the Trump Administration will do nothing well, do things incompetently, act without integrity and operate with intent to harm the poor and minority communities it is supposed to serve. DeVos and the Department of Education are not exempted from this reality. And reformers need to step up and oppose the administration at every turn on this and other fronts.