Your editor hasn’t spent much time on today’s National Student Walkout mostly because there has been plenty of coverage and commentary from other corners. Yet I find myself writing briefly…

Your editor hasn’t spent much time on today’s National Student Walkout mostly because there has been plenty of coverage and commentary from other corners. Yet I find myself writing briefly about the protests by high school students on behalf of gun control laws spurred by last month’s massacre of 17 students and teachers at Marjorie Stoneman Douglas High School in Parkland, Fla., because the event inadvertently intersects with an issue school reformers continue to deal with badly: The debate over stemming the overuse of out-of-school suspensions and other forms of harsh school discipline.

Ever since the walkout was announced, there has been an array of responses from traditional districts and other school operators. Some, notably the Mooresville district in Indiana, have actively encouraged the protests and, as in the case of New York City Mayor Bill De Blasio (who oversees the Big Apple’s traditional district) are participating in it. Others are merely offering spaces on campuses where protests can be held without leaving school grounds (and thus, keeping the students safe without infringing on their First Amendment rights).

Yet there are other districts who have decided that the response to nonviolent student protest is political and educational reprisal. This includes the Bentonville district, which serves the city that is home to retail giant Wal-Mart, which threatened to mete out three-day suspensions for engaging in the protests, and the Needville Independent School District in Texas (whose threat was met with protests from the American Civil Liberties Union and others, who noted that it also violated the district’s discipline guidelines). Another district, Bexley City, is planning to put all students protestors from its high school on detention for their action.

So you shouldn’t be surprised that conservative and centrist Democrat school reformers — who have generally been all too supportive of the overuse of harsh school discipline — were also supportive of the actions being taken by Bentonville and other districts. Robert Pondiscio, the vice president of the Thomas B. Fordham Institute (and, like his boss, Mike Petrilli, a longstanding opponent of school discipline reform), was particularly bellicose in his defense of suspending protestors, declaring that children should be punished for their own good. Why? Because the only way they can gain a “teachable moment” about protests and civil disobedience (especially those of civil rights leaders of the last century) is to suffer some form of punishment. The kids can’t just be allowed to actually exercise free speech.

There are a lot of problems with Pondiscio’s overall argument. The first? That schools aren’t allowed to explicitly or even covertly punish children for engaging in protests and other forms of free speech. This was first established by the U.S. Supreme Court 50 years ago in Tinker v. De Moines Independent Community School District and even before then in West Virginia Board of Education v. Barnette (which first recognized the First Amendment rights of students by declaring that they couldn’t be forced by districts to recite the Pledge of Allegiance against their religious and social consciences).

Districts can discipline students for incidental violations of school policies that result during the protests (as well as for disrupting classroom instruction and walking off campus). But they cannot directly punish youth for their protest rallies and cannot level punishments beyond what is already prescribed in discipline codes. Which is why most districts are wisely treading cautiously on this front.

This leads to the second problem: Pondiscio and others are essentially arguing that school leaders should harshly punish students for minor infractions, even when the actions don’t actually harm other children. This is particularly clear with the National Student Walkout and other political protests organized by youth. Considering the vast number of students who are participating in the walkouts — as well as the numbers of their peers who support them — school leaders cannot honestly argue that these actions are somehow damaging children.

Just as importantly, given that the protests will not lead to a tangible loss of time for instruction and learning, meting out suspensions and detentions is overkill. If anything, school leaders who suspend protesting students are actually doing more damage to children by meting out detentions and suspensions that keep them out of school (and thus, from learning) for hours and days at a time. 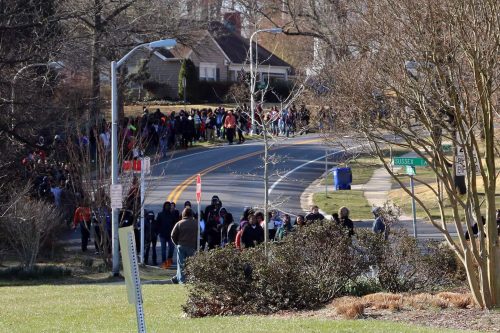 Students such as those at Bowie High School in Prince George’s County, Md., are learning plenty without suffering reprisals from school leaders engaging in arbitrary action. (Photo courtesy of Bowie Living.)

In advocating for arbitrary and capricious punishment based on the whims of school leaders, Pondiscio and others are exacerbating one of the problems that have led to school discipline reform efforts in the first place. Three decades of research that shows that teachers and school leaders often punish children, especially those Black and Brown, with little in the way of reason or nuance. This includes University of Pittsburgh Professor John Wallace’s 2008 study showing that young black men in 10th grade are 30 percent more-likely to be referred dean’s offices — and 330 percent more-likely to be suspended — for the same offenses than white peers, and a 2015 study by Adam Wright of University of California, Santa Barbara determining that beliefs among White teachers that Black children are unruly and poorly-behaved explain why they are more-likely to be referred for discipline and suspended than their White peers.

In the context of National Student Walkout — and as exemplified in protests led by minority youth in St. Louis and other locales — you can imagine principals and deans of discipline punishing Black students more-harshly than their White peers for exercising their First Amendment rights.

In arguing that National Student Walkout participants should be disciplined, Pondiscio and others are arguing is that children should not actually learn civic engagement, and ultimately, not take up their rightful roles as future leaders of American society. As men and women dedicated to helping our children be successful in school and in life, this line of thinking should be especially offensive. Certainly our children should read original texts to learn about the origins of the issues that still plague this nation. But classroom learning isn’t enough.

They must be participants in the political processes that can be used to either bend the arc of history towards progress or suppress the liberties of Black, Latino, and immigrant communities. Which is what the students participating in National School Walkout are doing. While your editor may not necessarily agree with all of their policy solutions (and note that much of their proposals ignore the consequences of the War on Drugs in perpetuating gun-related homicides), I also believe that our youth, our future adults and leaders, have a right and moral obligation to be engaged in the real world. This applies even to those youth whose activism may be objectionable to me as well as to their fellow students.

Finally, Pondiscio and his allies are basing their argument in part on a romanticized notion of “civil disobedience”, especially the protests conducted by the Civil Rights activists of the last century. Contrary to their notions, the reality is that the collegians who fueled the Freedom Rides and the Birmingham youth in the Children’s Campaign were arrested, jailed, beaten and hosed down with water canons on the technical grounds of violating laws and injunctions against protests. In reality, these activists were punished by Jim Crow state and local governments who opposed the fight against state-sanctioned bigotry and denial of equal opportunity through the use of police departments and courts (as well as through their support of the Klu Klux Klan organizations).

If the Bull Connors of the time weren’t using laws to engage in suppression of freedom and equality, the civil rights protests wouldn’t be called civil disobedience; they would have just been the rightful (and peaceful) protests against government actions protected by the Bill of Rights. As with other peaceful protests throughout American history by activists who weren’t actively opposed by governments, the protests of those activists would have been just as meaningful even without the threats to their lives. Put simply, Pondiscio and company are being ahistorical and intellectually dishonest to boot.

Instead of encouraging school leaders and teachers to overuse harsh school discipline against actions that harm no one — and perpetuating the woeful state of affairs in far too many districts — we should push them to limit suspensions and other discipline to the few acts of misbehavior (including weapons possession and assault) that truly harm the lives of other people. And we should stand by our youth as they take their rightful places in the world as well as learn how to be citizens and leaders in their communities and the nation as a whole.

END_OF_DOCUMENT_TOKEN_TO_BE_REPLACED
Comments Off on Why Student Protest Should Not Be Punished