At the State Level Inside the Beltway School Leadership

RiShawn Biddle
3 Comments on Race to the Edujobs?

As I have pointed out since the beginning of the year, the efforts by congressional Democrats and President Barack Obama to keep control of Congress may be the most-immediate problem… 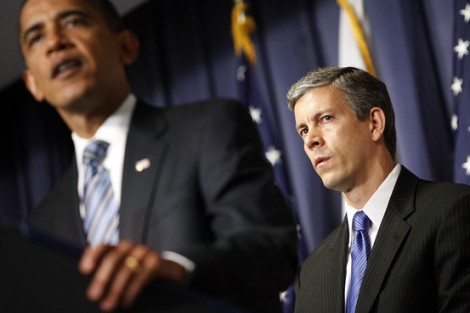 As I have pointed out since the beginning of the year, the efforts by congressional Democrats and President Barack Obama to keep control of Congress may be the most-immediate problem for the school reform efforts being orchestrated by Obama and U.S. Secretary of Education Arne Duncan. As Republicans continue to gain momentum — and are likely to capture seats in Indiana, Arkansas and perhaps, even Connecticut — Democratic leaders will need all their activists on the ground to bring out the votes — especially the National Education Association and the American Federation of Teachers, the single-biggest donors in Democratic (and general election) politics. But NEA and AFT support won’t come without a price — or without conflict with centrist Democrats who are driving Race to the Top and other Obama initiatives.

This was exemplified yesterday when outgoing Rep. David Obey proposed to use $500 million in dollars slated for Race to the Top to fund a $10 billion package to stave off an ever-dwindling wave of teacher and school staff layoffs. School reformers such as the National Alliance for Public Charter Schools, Congressman Jared Polis and the Education Trust went on the warpath, wrangling support against Obey’s effort, while the NEA and AFT reminded other congressional Democrats that they better pay to play.

As Education Trust communications czar Amy Wilkins rightly points out, Obama and Duncan can’t afford to let Obey succeed — and not just because the administration will lose credibility among states and the school reform movement. The reality is that the Obama administration has little in the way of concrete achievements (at least those that don’t involve the controversial and still-likely-to get-partly-overturned health care reform plan). Education reform is one of those sparse achievements and anything that renders it a failure may lead to Obama going the way of Jimmy Carter in the re-election department.

Then there is the reality that this latest version of the education bailout plan (originally planned for $23 billion) is not even needed. A few months ago, it was assumed that as much as five percent of the 6.2 million teachers and school staffers would be laid off due to fiscal problems. Since then, as Mike Antonucci points out almost daily, those layoff numbers have dwindled further as school districts and states use furloughs, tighten belts and attempt to divert federal special education funding to keep teachers and staff on payrolls. That this comes after a previous $100 billion bailout (as part of the federal stimulus plan passed at the beginning of Obama’s term as president) — along with news that education spending hasn’t exactly been flatlined in the past decade — makes school districts and states look downright spendthrifty.

Obama and Duncan probably realize that ARRA II, as I call it, won’t force states to deal with the long-term causes of their fiscal woes: Pension deficits, overly generous benefits such as nearly-free healthcare for teachers, and the traditional system of compensating teachers, which has been costly to taxpayers and students alike. Even if ARRA II forced school districts to abandon the use of reverse seniority (or last hired-first fired) in layoff decisions, it wouldn’t mean much without the acquiescence of NEA and AFT locals, who oppose any change in the status quo.

But for the Democrats, other considerations matter. This includes bolstering the re-election prospects of vulnerable candidates and setting the table for Obama’s re-election effort two years beyond. For the Democrats to overcome the odds of a Republican victory in November, they need lots and lots of bodies. And money. The NEA and AFT offer plenty of that — including $66 million during the 2007-2008 election cycle alone — and far more campaigners on the ground than what school reformers can muster.

Which has always been the problem for the school reform movement. Sure, they have succeeded in winning over most of the policymakers within the Beltway and the nation’s statehouses. But the NEA and AFT have the advantage of strength in numbers. Until now, that intimidation power — the combination of teachers working the corridors of Congress and state capitals and the soft lobbying of parents in schoolhouses — is why the two unions have dominated education policy. Although teachers unions have fewer supporters and can no longer count on unquestioned support from Democrats, they can still whip up enough money and bodies to stave off the most-pathbreaking of reforms, and win over support for bailout schemes that benefit their rank-and-file.

School reformers need to pay attention to what is happening now and build stronger ties to grassroots advocates and parents on the ground; and challenge politicians opposed to school reform at the ballot box and in the hallways. Without them, Race to the Top will become crawl back to the past. The 1.3 million kids destined to drop out in the next year need more than that.

UPDATE (10:54 p.m., July 1): Proving my point, Obey rallied all but 15 Democrats to approve the Race to the Top cuts 239-182 [note: link still says vote not yet available). All but three Republican voted against it.