Certainly Washington, D.C., is at the center of a rapidly growing metropolitan area. But the Nation’s Capital is itself a relatively small city. Just 680,000 live within the heart of the Beltway, of whom approximately 320,000 are Black and 280,000 are White. Or, to be clearer, it is two cities, one White and increasingly prosperous, the other Black.

Black Washington is not in any meaningful way in the same socio-economic category as White Washington, and that is clear by every economic and educational measure. Which makes all the discussions about D.C. Public Schools’ graduation fraud scandal even more important than it already appears.

In Washington, D.C., nearly 90 percent of the District’s White residents have Bachelor’s or Graduate degrees, qualifications attained by just a quarter of Black residents 25 years of age and over.

The DC Fiscal Policy Institute has found that Washington’s White families have 81 times more wealth, on average, than Black families, and “a higher level of income inequality than any state in the country, with households in the top 20 percent of income having 29 times more income than the bottom 20 percent.  The bottom fifth of DC households had just two percent of total DC income in 2016, while the top fifth had a staggering 56 percent.” The Institute concludes that “race is at the heart of DC’s economic inequality.”

Wealth, like poverty, tends to be inherited.  This often comes from home ownership.  In Washington, D.C., due to, among other things, mid-twentieth-century federal policies, approximately half of the White population own their own homes, while only a third of the Black populations own their homes. The median value of those White owner-occupied houses is $739,000; that of Black owner-occupied units is $385,000. If these houses are passed along to the next generation, the children of White homeowners start with twice the wealth, from this source alone, as do the children of Black homeowners. 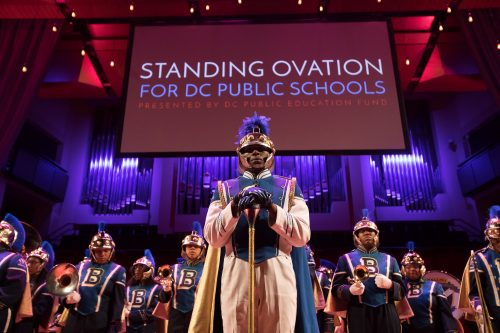 Certainly D.C. Public Schools is no longer the Superfund Site of American public education. But it still has miles to go before it can receive applause for properly education Black children.

In the nation’s capitol, the caste system that replaced slavery is characterized by a wealthy White, managerial caste and an impoverished, Black, service caste, with the former averaging incomes in the top 10 percent of the national income distribution, the latter averaging incomes far below that.  Black children born into poverty have less of a chance of rising out of poverty than White children; the relatively few Black children of upper middle class parents have a greater chance of falling to a lower class than their White peers.

In addition to inherited wealth, largely unavailable to Black residents of Washington, education is a proven route out of poverty. But this route is also closed to Washington’s Black children — often regardless of whether they attend a traditional district or charter school.

The average Black student attends a school in which 82 percent of the students are poor; the average White student attends a school in which only a quarter of the students are from poor families. The Brown University Dissimilarity Index measures whether one particular group is distributed across census tracts in the metropolitan area in the same way as another group. A high value indicates that the two groups tend to live in different tracts. A value of 60 (or above) is considered very high. The Black-White Dissimilarity Index for the District is 83 out of 100.

Before the Supreme Court’s Brown decision, Washington had some fine schools for Black children. Segregation does not automatically lead to differentiated education achievement; after all, children in public charters schools generally do better than their peers in traditional districts despite stratification based on race. It’s just that the reality in traditional public schools is that segregation usually leads to worse outcomes for Black and other minority children.

In D.C.’s schools, 79 percent of fourth-grade White students whose family income is sufficient  to make them ineligible for the National Lunch program, test as Proficient or Above in reading (and 95 percent Basic or Above).  For all intents and purposes, all the district’s middle class White fourth grade students are taught to read at an acceptable level or beyond that: very well.  And the White students who are not from middle class families? There are too few White students eligible for the National Lunch Program in Washington for NAEP to report their test results.

Over 90 percent of public school students in the Washington, D.C. are eligible for free or reduced-price lunch.  Almost all of these are Black. Educational opportunity in the District of Columbia’s traditional district (as well to a lesser extent, in its charters) are distributed by race and income.  It amounts to the same thing.

These numbers matter.  Literacy is essential for all other education; reading skills rarely change much between middle school and high school graduation (of which more below).

The District of Columbia school system claimed a 73 percent graduation rate in 2017. The Washington Post recently reported that “one in three graduates received their diplomas in violation of city policy. Wrote the Post:  “Those students had walked across graduation stages despite missing too many classes or improperly taking makeup classes. . . Even if all of the students regarded as “moderately off-track” receive diplomas, the graduation rate would stand at about 61 percent — 12 points below last year’s.”

Would even 61 percent of Washington, D.C. students graduate college and career ready? Not at all. In eighth grade, just 53 percent tested at or above Basic in reading, just 25 percent were Proficient or above. It is probably significant that in 2013 96 percent of students entering the Community College of the University of District Columbia required at least one remedial course; half needed remediation in four subjects. By 2017 it was reported that 98 percent of public school graduates needed remediation after enrolling in the University of District Columbia.

Given this education system, Washington, D.C., will likely remain two cities, one White and increasingly prosperous, the other Black, impoverished, in a context in which poverty is reproduced from one generation to the next. Simply allowing children incapable of succeeding in college and life to graduate isn’t going to help end this racial caste system.

Here’s a suggestion for the District of Columbia Public Schools:  Instead of faking graduation rates, teach your Black students to read.

It's Up to You, New York