No one should be surprised by last night’s resignation of Antwan Wilson as Chancellor of D.C. Public Schools. In light of Friday’s revelations that he successfully subverted the district’s school zoning rules to place his daughter into a highly-coveted spot in Woodrow Wilson High School, it was only time before Mayor Muriel Bowser (mindful of her re-election campaign) told him to pack up his office.

The real question is where does DCPS go from here? This can only be answered by looking honestly at both the district’s successes over the past two decades in improving student achievement that many reformers prefer to think about as well as admitting the shortcomings that conservative reform camps and many traditionalists prefer to harp on.

Even before Wilson’s resignation, his tenure was becoming more of a clean-up of the mess left behind by predecessor Kaya Henderson than an effort to continue overhauling DCPS’s teaching and curricula. He had to deal with wide public scrutiny (as well as a federal investigation) into last month’s revelation that the district allowed one-third of its graduating Class of 2017 to leave its high schools without taking the credits, courses, or attendance needed to get legitimate sheepskins.

Wilson also had to deal with criticism from conservative school reformers (especially hardcore school choice activists) who, despite the fact that the problems happened under Henderson, blamed him for the academic fraud. This, in turn, opened the door for that group of erstwhile reformers to tag team with traditionalists in arguing that the gains in student achievement made by DCPS under his predecessors were illusory at best.

Now that Wilson is gone, it is now up to Bowser and whoever she ultimately appoints to succeed him as chancellor to clean up the mess. More importantly, continuing the overhaul of DCPS is critical, especially for the Black and Brown children who make up the vast majority of the students attending its schools. This must start with honest consideration, based on objective facts and evidence, of how far the district has come in the goal of helping all children succeed and how many steps it must continue to take. Something that nearly everyone, including reformers defending DCPS’ efforts and those criticizing them, have so far failed to do in an honest way.

This must start with this basic fact: The overhaul of DCPS has helped more children in the District — including poor and Black children who make up the majority of enrollment — gain high-quality education.

While traditionalists and hardcore school choicers among conservative reformers want to attribute these improvements to wealthier White and Black families moving into the District (you know, gentrification), that assertion isn’t borne out either by demographic or NAEP data. While the percentage of White children served by DCPS tripled between 2001-2002 and 2014-2015 (from 4.6 percent to 12.7 percent), Black children, especially those from low-income households, still make up the vast majority of students in the district’s care. 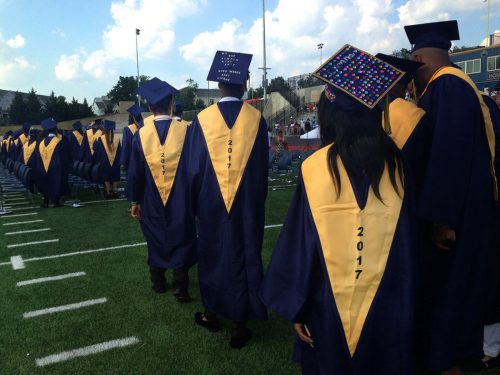 DCPS has achieved some real improvements. But it still has a long way to go before it can be considered successful in educating all children. Photo courtesy of Kate McGee of WAMU.

Put simply, DCPS, under the leadership of four different mayors (Anthony Williams, Adrian Fenty, Vincent Gray, and Muriel Bowser), six different chief executives (including Henderson and her predecessor, Michelle Rhee), and two different forms of governance (elected school board and mayoral control), has made demonstrable and substantial improvement in how it serves the children in its care.

Yet it is also clear that DCPS has miles to go and promises to keep. The graduation fraud merely exemplifies this basic fact.

As Dropout Nation detailed last month in its report on college-preparatory education, both DCPS and the city’s charter schools are struggling mightily to provide children with the knowledge they need for success in adulthood. Even worse, the achievement and expectations gaps that have long plagued the district remain a problem, especially during the high school years. There is no reason why there is a three-fold disparity between the number of Black and White high schoolers taking AP courses, especially when Black children are the majority of students at elementary and secondary levels.

DCPS is no longer the Superfund Site of American public education. But there are still far too many children who cannot gain higher education and employment after they graduate from school, something that is also clear from the Alvarez & Marsal report on the district’s graduation fraud. The fact that DCPS’ improvements, strong as they have been, have trailed those of the city’s charter schools, is also a reality that must be acknowledged.

The gamesmanship of DCPS’ leaders, a problem that has been around long before Rhee’s tenure as chancellor, remains as troubling and unacceptable as ever. Even before the revelations of the graduation fraud, the district still struggled with allegations of test-cheating during the Rhee era that neither she nor Henderson addressed. Over the past year, the allegations of fraud became more-prominent, especially with revelations after Henderson’s departure that principals and others were hiding their overuse of out-of-school suspensions in order to reduce their numbers. Meanwhile Henderson got into trouble for her moves allowing some city officials to send their children to schools outside of their school boundaries (when ordinary citizens would find themselves in trouble for doing the very same thing). [Oddly enough, Wilson ran afoul of that very policy after having approved a restriction that keeps him from doling out such favors to the well-connected.]

The biggest problem for DCPS — and for the District of Columbia at large — is the reality that there are limited opportunities for high-quality education, especially for poor Black and Latino families in the city. The school zones and other Zip Code Education policies that help middle class White and Black families in Northwest D.C., gain access to the top-performing schools in the district also keep out the poor families who live in the Southeast parts of the city. Just as importantly, even when the schools serving the poorest kids do well academically, they are still lacking the variety in extracurricular experiences — including those found in private schools and the toniest suburban districts — that all parents regardless of income want for their kids. While DCPS announced plans last year to add lacrosse, archery and other such programs to its schools, that effort may have stalled with Wilson’s exit.

This lack of opportunity isn’t just a problem in DCPS alone. When you consider that the many of the city’s high-performing charter schools are located in Northwest, far from the southeast communities where the vast majority of poor Black and Latino children and their families live, the reality remains that those youths bear a burden in the form of time required to go to and from school that isn’t borne by middle class Black and White counterparts. As Dropout Nation noted last month, the lack of college-preparatory education provided by the city’s charters to the children in their care is absolutely unacceptable, especially given the need for such knowledge in achieving lifelong economic and social success. Put this way, contrary to what some conservative reformers want to argue, school choice in the Nation’s Capital hasn’t worked nearly as well as they proclaim.

Addressing these challenges requires DCPS and the city’s political leaders to build on the successes of the past two decades as well as heeding the lessons from its shortcomings. This starts not by engaging in sophistry that denigrates those achievements nor in propagandizing that ignores the problems. It starts by being honest about where the district has been, where it is and where it needs to be.

Whether this will actually happen is ultimately up to D.C.’s leaders and the families whose children they are supposed to serve.