RiShawn Biddle
Comments Off on Betsy DeVos’ Silence is Deafening

Last night, during his State of the Union Address, the current Occupant of the White House did what he almost always does when it comes to undocumented immigrant children and the native-born offspring of undocumented (and even documented) immigrant parents: He denigrated them.

The mother of four who serves Trump as U.S. Secretary of Education, an avowed Christian charged with transforming American public education as well as defending the futures and lives of those very children and youth, sat there, tacitly agreeing with every profanity he lodged against them and their communities.

Given her past record, this is certainly not shocking. But it also shouldn’t be this way. This silence in the face of demagoguery, this acquiescence to policies, practices and ideas geared toward harming our most-vulnerable children and the communities who love them, is one more example of how Elizabeth Prince DeVos is unqualified to lead in American public education.

Contrary to the statement of American Enterprise Institute scholar (and Maryland State Board of Education President) Andrew Smarick, there was a lot of awfulness about Trump’s speech, both in its delivery and its rhetoric. Elizabeth Bruenig of the Washington Post astutely noted that his speech was little more than a litany of “ethnically-inflected nationalism”, that consisted of “scapegoating” and appeals to “creating thick borders between us and them so that we will feel more like an us.” As Dropout Nation readers already know, Trump and is ilk think mothers, fathers, and children who aren’t White or of European descent are the ‘them’ that need to be cleansed from American society.

The fact that Trump didn’t offer much in the way of a thought on education — other than touting vocational education programs long used to keep poor and minority children from high-quality college-preparatory education (as well as fail in terms of addressing the reality that the knowledge needed for success in traditional colleges are also needed for success in technical schools and apprenticeships run by community colleges) — was the only comforting thing about it. Because he didn’t tar systemic reform with his endorsement.

But the worst of his vitriol was reserved for immigrants regardless of legal status.

Trump wrongfully argued that America’s immigration laws, a dysfunctional messy legacy of racial, ethnic and religious bigotry, allows too many emigres to sponsor “unlimited numbers of relatives for citizenship when, in fact, they can only spouses, children, parents and siblings (and even for the last group, it can take as long as 20 years to gain legal entry in the first place). He also claimed that the immigration system’s so-called “visa lottery” — which actually involves a background check, an interview and requirements such as having a high school diploma or two years of training in a high-skilled job — doesn’t have any requirements for entry.

Trump also insinuated that undocumented emigres were little more than criminals. This  prominently mentioning MS-13, the gang originally formed in Los Angeles, Calif., that has become a menace to Central American nations since the early 1990s thanks to U.S. foreign and immigration policies (including deporting its members to Central American nations such as Honduras and El Salvador) that have led to more people from those nations (including so-called Border Children that several Congressional Republicans have denigrated) fleeing to our shores. Despite the fact that most MS-13 members are native-born Americans, Trump still claimed that they were an invading horde because of supposedly open borders. 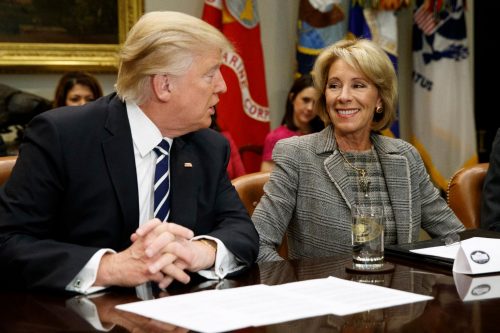 Betsy DeVos has been a silent and willing collaborator in Trump’s bigotry against Black, Brown, and immigrant children as well as their families and communities.

Even worse than that, Trump insinuated throughout his speech that Dreamers, the 780,000 children, youth, and young adults (including 9,000 teachers working in classrooms) who now face deportation thanks to his move last September to end Deferred Action for Childhood Arrivals, weren’t worthy of protection or even contributors to American society. This included his declaration that “Americans are dreamers too”, essentially arguing that only native-born Americans are worthy of consideration He also doubled down on the proposal his administration issued last week, which would only allow Dreamers to gain citizenship after a cumbersome 12 year process– even though most of the youths have already been in this country all but a few years of their lives, end up gainfully employed as adults, and been citizens of this country in all but paper.

There was nothing in Trump’s speech that acknowledged how Dreamers working in our traditional public, charter and private schools (including those recruited by Teach For America) are helping native-born and immigrant children gain the knowledge they need for lifelong success. Not one word accepting the reality that America has always been a nation of immigrants, men and women who, despite state-sanctioned bigotry (which always extended to the descendants of enslaved Africans as well as American Indians and Alaska Natives already on this soil), managed to be contributors to the nation’s political, social and economic fabric. What he did instead is engage in even more of his bigoted demagoguery, doubling down on his nasty statements about immigrants made earlier this month during a meeting to work out a deal to help Dreamers gain citizenship.

What did DeVos do while Trump smeared the immigrant children under her watch and the emigres who teach in schools? Nothing. Last night, she issued one statement focused on a meeting she will have with the Occupant today. Then this morning, she issued another, calling on Congress to “to act in the best interest of students and expand access to more education pathways“, a nice way of she wants to keep poor and minority children from accessing traditional higher education and gaining college-preparatory learning.

Sad. Immoral. But not shocking. Because this isn’t the first time Betsy DeVos has had little to say about President Donald Trump’s bigotry.

As chair of the American Federation for Children, she was silent after he won the Presidential election back in November 2016. Instead of demanding that he apologize for his rank demagoguery against immigrant and minority children during his campaign, she declared  that she would work with him.

When Trump nominated her to become Secretary of Education, she neither refused his invitation nor called on him to recant his bigotry nor sought to distance herself from his nastiness. Again, she said nothing at all, and, in fact, appeared at one of his events celebrating his victory.

Months later, when Trump false claimed that White Supremacists participating in the Unite the Right terrorism in Charlottesville, Va. were only partly responsible for the violence that resulted, DeVos, now firmly in her job as Secretary of Education, still said nothing. Save for a memo to her staff that condemns bigotry, she stayed silent.

A month later, when the administration announced that it was ending DACA and putting undocumented immigrant children, youth and adults on the path to deportation, DeVos and her minions at the Department of Education offered nothing in the way of a plan to help them. She kept her silence while proceeding to scale back the agency’s role in protecting the civil rights of poor and minority children.

Of course, DeVos hasn’t been alone in her silence in the face of Trump’s bigotry. Far too many erstwhile school reformers have been all too willing to say nothing. Rick Hess and his team at the American Enterprise Institute, along with other conservative school reformers, have spent more time being the amen corner for DeVos and the administration than being moral champions for our most-vulnerable children.

Save for civil rights-oriented reformers, a few in the conservative and centrist Democrat camps such as former Thomas B. Fordham Institute President Chester Finn Jr., and, most-notably, Education Trust, Emerson Project, and Teach For America (the latter of which has been criticized for its steadfast support for Dreamers), other camps within the movement have stood idly by or have chosen to focus on other things. This is especially clear from weak and lackluster responses from reformers before and after yesterday’s State of the Union Address.

For a number of reasons, including an unwillingness to work with traditionalists such as the American Federation of Teachers (which has also been steadfast in defending DACA youth), they have offered little support for helping undocumented immigrant children, either on the policy front or on the ground in places such as Philadelphia, where they face the risk of detention and deportation just for trying to gain knowledge they need and deserved.

All of these reformers deserve shame. But DeVos, whose family remains a major player in subsidizing the movement, should be especially ashamed. By being more-concerned about ideology and agenda than about defending every child no matter who they are, she has made mockery of her professed faith, violated God’s Commandments (especially in the Beatitudes), and denigrated what was once a respectable legacy of expanding public charter schools and other forms of school choice. Like any Christian, DeVos is supposed to be a living sanctuary, not the tool of evil men. As Jesus Christ, who commanded all of us to do for the least of us, the Children of God, would not approve.

Each and every day, DeVos continues to prove that she is unfit for her office. Yesterday was just another example. For shame!