RiShawn Biddle
1 Comment on The Children of D.C. Suffer

There will be plenty of conversation — not necessarily among school reformers — about yesterday’s revelation that D.C. Public Schools allowed one-third of its graduating Class of 2017 graduate from its high schools without taking the credits, courses, or attendance needed to get legitimate sheepskins. There will even be speculation on the implications of this news on Mayor Muriel Bowser’s re-election campaign as well as the possible challenge by predecessor Vincent Gray (now back on the city council). Others will note that what happened in D.C. is one of many revelations of graduation fraud going on in districts throughout the nation.

Yet it is important to keep in mind that DCPS’ alleged graduation fraud is more than simply an embarrassment to the district, to school leaders currently on the job who oversaw the violations, and Former Chancellor Kaya Henderson (under which most of the fraud occurred). This is also about young men and women cheated by the adults who should have done better by them.

Thirteen young men and women who can no longer claim they are high school graduates because they didn’t earn enough credits in the first place. Another 572 youth who cannot really claim to be DCPS graduates because they 30 or more many days of school unexcused during the 2016-2017 school year. Four hundred eleven more were awarded diplomas by the district because it wrongly designated their work through credit recovery programs (or make-up classes) as original high school credits.

Altogether, 937 young men and women who have been given phony diplomas, paying the price each day for the errors, incidental and deliberate, overseen by principals at Ballou, Paul Lawrence Dunbar and the district’s other high schools.

But the damage extends beyond those young men and women. There are 1,821 high school graduates within DCPS, young men and women who went to their classes, completed their courses, did what they were supposed to do. Yet those young adults have now become guilty by association because there will be questions about whether they have learned exactly what DCPS said they did. This is simply unfair to them. 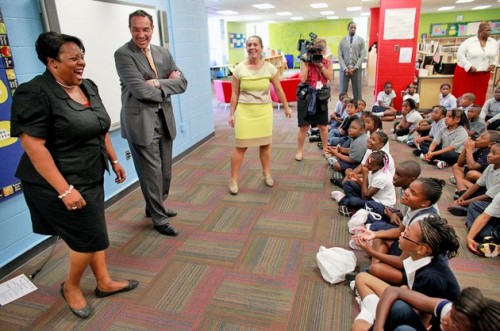 Former D.C. Public Schools Chancellor Kaya Henderson deserves more than a little scorn for the violations of graduation policies (and the underlying causes of them) that took place under her watch.

Also touched by the scandal are the thousands who have graduated from DCPS over the past five years. After all, the district didn’t just start violating state laws and its own graduation policies overnight. The failure of DCPS to link its Aspen school data system to its system for tracking attendance, for example, has probably been noticeable since the district implemented it three years ago. This means a look at graduation numbers over the past three-to-five years will likely reveal more examples of sheepskins being handed out when they shouldn’t have been. Even if that isn’t so, those graduates are now tarred by association.

The children and youth deserve an apology. First from the district’s current leadership, including Chancellor Antwan Wilson (who came onto the job near the end of the 2016-2017 school year and has little responsibility for what happened), who should have addressed these issues, even if it meant students wouldn’t have been able to graduate with their classmates. Secondly, from Mayor Muriel Bowser, who has oversight responsibility for the district because she appoints the chancellor. Both should embrace the recommendations of the Alvarez & Marsal report and implement them promptly to avoid future graduation fraud.

Former Chancellor Henderson, along with other former executives working in the district, must also apologize and admit their responsibility for the shortchanging of these children.

After all, Henderson was the chief executive of the district during most of the 2016-2017 school year, and the issues mentioned in yesterday’s report existed throughout her tenure. It was under Henderson when the Aspen system, which failed to alert teachers about the number of high school seniors missed 30 or more days unexcused, was put into place, and the failure to connect the system to the district’s attendance data system happened under her watch. Henderson was also the chief executive under which several principals implicated in the graduation fraud, including Ballou High School’s Yetunde Reeves (now on leave pending a decision about her future employment), were put into their jobs, and when many of the complaints from teachers and others about the violations were lodged.

Certainly there are reformers who want to soft-peddle Henderson’s responsibility for this mess. Max Eden of the Manhattan Institute (whose own tendency for using and perpetuating misleading and dishonest ‘research’ has been exposed by this publication), is now leading the charge to ignore Henderson’s role altogether by blaming the fraud entirely on her successor even though he arrived on the job in February 2017, or at the midpoint of the school year. But Henderson’s failure of leadership cannot be ignored. By not addressing problems with the school data systems, failing to holding teachers and school leaders to account for violations, and not clarifying district and District of Columbia attendance and credit recovery rules under her watch, she damaged the very children she was supposed to help.

Meanwhile Henderson’s failure to address these issues, and the scandal resulting from them, is a reminder that Henderson’s tenure has been marked by an unwillingness to address allegations of test-cheating under predecessor (and mentor) Michelle Rhee; public embarrassment over her moves to allow some city officials to send their children to schools outside of their school boundaries (when ordinary citizens would find themselves in trouble for doing the very same thing); and revelations (after she left office) that principals and others were hiding their overuse of out-of-school suspensions in order to reduce their numbers. These failures put another black mark on what has otherwise been a strong record of success, both her own and that of other reformers in the Nation’s Capital working on transforming education for all children.

No one’s leadership is perfect. This goes without saying. But it shouldn’t have taken news outlets such as public radio station WAMU (whose initial report focused on Ballou) to bring these revelations to light. The district’s former and current leadership should have addressed these problems long ago, and should have been transparent about them.

At the end of the day, it is the children and youth of the District of Columbia, including the 937 now found to have incomplete and, ultimately, fraudulent, diplomas, who suffer the damage. These boys and girls, young men and women, go to school expecting that the adults who serve them are actually going to help them gain high-quality education. They expect to graduate with the knowledge and skills needed for success in higher education and in the working world. Yet the adults serving them failed them miserably on this count, as well as in providing them with higher ed-preparatory coursework. Now, at least 937 children are walking around with diplomas that are literally not worth the paper on which they have been printed. ,

Our children and youth in D.C. deserve better. And honestly, apologies aren’t even close to being enough.