Hess Protests Too Much: Your editor keeps a few things in mind when it comes to American Enterprise Institute education czar Rick Hess’ jeremiad in Education Week about a protest banner accusing U.S. Secretary of Education Betsy DeVos of being a White Supremacist during her appearance last month at Harvard University. The first is that AEI’s star-studded board includes the education secretary’s brother, Erik Prince, who is also a prime donor to the think tank. That conflict must be considered when reading anything Hess writes in defense of her. Secondly: Hess himself has earned a reputation for being racially myopic, especially in his dismissal of focusing on achievement gaps in transforming public education as well as his statement that expanding school choice rewards the supposed irresponsibility of poor and minority families. Simply put, when Hess discusses any issue involving race, he is often projecting.

All that said, let’s concede one of Hess’ key arguments in that piece: That the Harvard student who displayed the banner could used better choice of words. Not because, as Hess argues, accusations of White Supremacy are tossed around too liberally these days (more on that in a second). But because the protester could have offered more-direct complaints about DeVos’ tenure that are on the mark.

There’s the move made by the Department of Education’s Office for Civil Rights to reduce the scope of its investigations into systemic overuse of suspensions, expulsions, spankings, and even restraints and seclusion (solitary confinement) against Black, Latino and other minority children, essentially scaling back the agency’s mission of protecting the most-vulnerable children. There’s DeVos’ tepid response in August to the violence by White Supremacists in Charlottesville (which echoed that of the rest of the Trump Administration). There’s also her consistent failure to condemn the bigotry of her boss, the current Occupant of the White House, who has consistently accused undocumented Latino emigres of being rapists and members of gangs. Finally, there is her unwillingness and inability to stand up for other vulnerable children, from transgendered youth to the 800,000 undocumented youth and adults brought to America as kids who now face deportation thanks to the Trump Administration’s move to end Deferred Action for Childhood Arrivals.

None of this, by the way, includes her general unwillingness to embrace the civil rights mission of the Department of Education as laid out in the Every Student Succeeds Act and other federal education policies. An issue made clear again earlier this week when her priorities list was revealed, none of which mentioned doing right by poor and minority children.

As you would expect, Hess didn’t mention any of those issues in his critique. After all, he would have to concede that those protesters would have a legitimate point to make, even if he disagreed with them. More importantly, in acknowledging those issues, he ends up weakening his main argument: That far too many people, including progressive and civil rights-oriented school reformers, are too willing to accept (and toss around) accusations of White Supremacy and racial bigotry.

This is because, like a number of prominent White intellectuals outside of education policy such as New York‘s Jonathan Chait, Hess fails to admit is that bigotry in general, and White Supremacy in particular, isn’t some binary thing. That is, White Supremacy isn’t simply about someone being an active bigot or professing their hatred of people from other racial and ethnic backgrounds.

All racism, including White Supremacy, is a continuum of actions that are often divorced from personal and social intentions. A Klansman or Skinhead can occasionally do good for — and even save the life of — people who he generally hates. At the same time, a person who isn’t a bigot, even someone who has committed themselves to helping those who don’t look like them, can support or remain silent about policies and practices that maliciously or incidentally damage the lives and futures of poor and minority people. More importantly, as author Richard Rubin once surmised in his famous essay on the jurors who let off the murderers of Emmett Till, individuals regardless of their position and power can find themselves unwilling to challenge and oppose those policies as well as the men and women who are promulgating them.

This reality, of course, creates a conundrum for many White reformers, especially those of a conservative bent, who support practices done by others in and out of the movement that have been proven by data and evidence to damage the very children they proclaim their concern. In the case of Betsy DeVos, the reality is magnified by her decision to join a regime deliberately dead set on harming those very same kids.

Certainly, DeVos’ admirable record in expanding school choice does argue against her being an active White Supremacist. But since Trump’s election to the presidency last November, she has been unwilling to challenge him on his bigoted statements, both before and after being nominated to serve as the nation’s top education officer. More importantly, she has done nothing to intervene on behalf of children, especially those who are undocumented as well as native-born children of emigres, as they deal with the Trump Administration’s active efforts against them and their families (including moves by the U.S. Department of Justice to deny due process in deportation hearings).

In fact, by simply joining Trump’s administration, DeVos tacitly agreed to not stand up for the children Black and Brown whose families (along with their futures), the regime has essentially targeted for condemnation to the economic and social abyss. Even worse, as a philanthropist who already had an influential role in shaping education policy through roles such as chairing the American Federation for Children, she didn’t need to join. DeVos made a calculated decision to associate herself with the likes of Attorney General Jeff Sessions (who was once denied a federal court judgeship because of his rank bigotry) and Trump himself, whose long record of racism existed long before he decided to run for public office.

While DeVos may not be a bigot or a White Supremacist, she is a willing collaborator with one. That Hess fails to realize or accept this speaks more about his issues than about others within the movement who have been unwilling to defend his favorite education politician.

More on Making History and Civics Personal: There have been plenty of responses to this month’s essay on how genealogy records and other data can be used to help children better-understand American history and civics. One of the questions raised was what are other ways can teachers make history personal and relevant to the children they teach. Just as importantly, beyond understanding the nation’s tangled racial legacy, how can they gain empathy and insight on how the nation’s wars have affected society, and even understand current geopolitical issues facing us today.

One idea lies with the monuments our nation has erected to the men and women who have died in the wars of the last century. This can easily be done by teachers in places such as Indianapolis, Ind., which is home to the more war monuments than any other part of the nation. 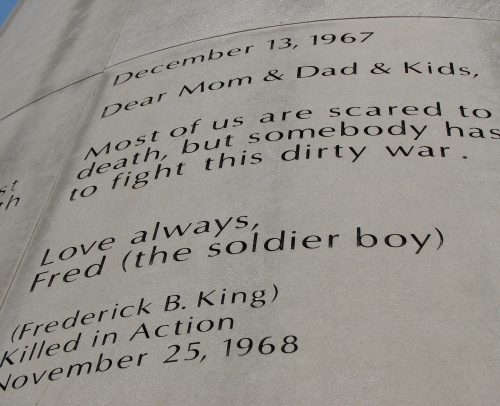 A teacher at North Central High School in the city’s Washington Township district can take her class down to the Vietnam and Korean War memorials where the letters of soldiers killed in action are etched on the walls for contemplation. There, they can read the letter of Frederick Ben King, a native of Hammond, Ind., who was killed by sniper fire in 1968. Through a Google search, they will learn that King had a mother named Rosell and a father named Floyd. They will also find a Chicago Tribune article that will mention that he was 17 years old (and attending Oliver P. Morton High School) when he chose to enlist in the army. That article will also tell them that he had told his mother that he planned to be home by Christmas — and that he was killed one month before he could see them.

In researching Frederick Ben King’s story, the students will learn in a personal way how devastating Vietnam was on the lives of young men and women, both those who never made it home and the ones who came back scarred physically and emotionally. Through that, they will also understand how that devastation led to the end of the involuntary draft, which had been previously used to staff our armed services during times of war, as well as the passage of the 26th Amendment, which lowered the voting age from 21 to 18 in reflection of the reality that those who can serve the nation should also be able to pick its political leaders.

Students can then go the letter of another Indiana native, John E. Welches, who was killed in action during the Korean War in 1951. Through Census data as well as state death records, they can learn that he was the only son of a machinist named August, who never left the Hoosier State and outlived his son by 29 years. By looking at online archives on the Korean Conflict, they will also learn that John spent his last days in the Haean-myon Valley, the infamous Punchbowl, which was located just miles from the now-demilitarized zone that separates South Korea from North Korea.

Through that research, students can then learn more about the origins of the Korean War, how the United States entered into the conflict, and understand why the sparring between the Trump Administration and the government of North Korea’s dictator, Kim Jong-un, is so perilous for Asia and the rest of the world.

This isn’t to say all monuments are useful in instruction. The Confederate war memorials littering the nation, for example, have little use outside of showing how people use public spaces to reshape understanding of the origins of wars and debates over civil rights. Other memorials, including many devoted to the Second World War, leave out the roles of Americans of Japanese descent who were forced into concentration camps by  the federal government after Pearl Harbor, as well as the American Indians who fought ably for the nation despite the federal government’s genocidal acts towards them and their tribes.

Yet there are plenty of monuments, including the Vietnam War Memorial in Washington, D.C., the U.S.S. Arizona Memorial in Hawaii, and the monument dedicated to Japanese-American war heroes of World War II, that offer plenty for students to contemplate and reflect upon. Which makes them useful in helping those kids gain greater understanding about their nation and its long struggle to bend the arc of history towards progress for all.