RiShawn Biddle
Comments Off on AFT’s One Step Forward

The American Federation of Teachers spectacularly failed last election year in its effort to preserve its influence at the federal level. Its big bet on Hillary Clinton’s unsuccessful campaign for the White House, along with its support of Democrat candidates in House and Senate races have left it with even less voice in education policymaking at the national level than it had under the Obama Administration.

But as the AFT reveals in its 2016-2017 filing with the U.S. Department of Labor, it has done somewhat better at the state and local levels where it has considerably more influence. Whether or not the Big Two teachers’ union can stem past losses in clout still remains an open question.

On one hand, AFT, along with the National Education Association, was successful in defeating an effort to expand the number of charter schools in Massachusetts contained in Question 2. While the NEA and its Bay State affiliate did the bulk of the work, AFT did its part. This included $1.7 million to Save Our Public Schools, the coalition run by the union’s Bay State affiliate and NEA’s longtime vassal, Citizens for Public Schools, to defeat the measure. AFT also handed out $200,408 to its Bay State affiliate’s solidarity (independent expenditure) operation, and $19,358 to the political action committee of its Boston Teachers union local in order to stop Question 2 from passing. All in all, AFT spent $1.9 million on the effort.

A bigger (and less-expensive) win for AFT happened in Georgia, where it worked to defeat Amendment 1, which would have allowed the Peach State’s government to form a statewide school takeover district similar to the now-defunct Recovery School District in Louisiana that would have taken over failure mills throughout the state, including Atlanta (whose schools are unionized by AFT’s affiliate there). Considering how both AFT and NEA were defeated by reformers two years earlier on a ballot measure to allow the state to authorize charters, the defeat of Amendment 1 was a surprise to the movement.

What helped stop Amendment 1’s passage was the $250,000 AFT contributed to the Committee to Keep Georgia Schools Local, a coalition of unions and traditional districts oppose to the measure. Best of all, AFT’s donations piggybacked on the$4.7 million given by NEA to Committee to Keep Georgia Schools Local, accounting for the bulk of the $5.1 million the group spent in defeating the ballot initiative. AFT also gave $119,904 to its Peach State affiliate and its political action committee, dropped $50,760 on hotel rooms and conference space at the Atlanta Marriott Century Center near the campus of Emory University, and gave $20,000 to the Peach State affiliate of AFL-CIO. Altogether, AFT dropped just $440,664 on stopping Amendment 1. 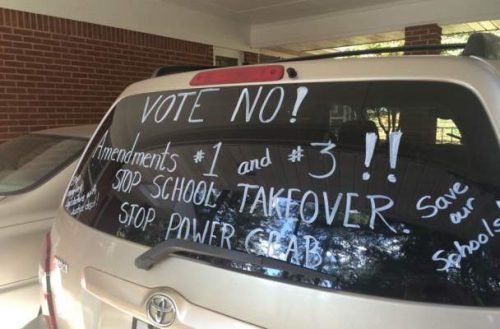 AFT didn’t have to spend much (or lift a finger) to gain a victory in Georgia by defeating the school takeover plan contained in Amendment 1. [Photo courtesy of the Atlanta Journal-Constitution.]

But AFT suffered a major loss in Oregon, a state in which its teachers’ union and nursing affiliates are dominant forces in policymaking. There, the union failed to gain passage of Measure 97, which would have levied a gross sales tax on businesses selling more than $25 million in products annually, as well as allowed the state to collect gross sales taxes on business producing more than $100,000 in revenue a year. If the measure had passed, 70 percent of companies currently paying a minimum tax would end up paying more money. This would likely mean more revenue for traditional districts in the state as well as cash for healthcare funding, both of which benefit AFT and its affiliates through higher salaries as well as more teachers and nurses forced to pay into their coffers.

To help its affiliates out, AFT dropped $1 million into Yes on 97, the ballot committee that initiated the measure. It also tossed in some more coins — $136,576 to be exact — into the solidarity fund of the union’s AFT Oregon unit. To add some further help, AFT sent out Executive Vice President Mary Cathryn Ricker to help kick off an effort to knock on the doors of 100,000 voters. That, along with other hotel stays in the state, cost the union $25,159. But that $1.2 million in spending achieved nothing; Measure 92 went down to defeat by a whopping 300,000-vote margin.

Oddly enough, AFT didn’t weigh in on California’s Prop. 51, which initiated a $9 billion bond issue for constructing traditional district and charter school buildings as well as new construction for higher ed. The initiative, which was supported by most of the state affiliates of the nation’s construction trade unions, was approved 55 percent-to-45 percent last November. One likely reason: Golden State Gov. Jerry Brown, who opposed the initiative because it is adding to the state’s virtual insolvency; the fact that the proceeds wouldn’t go to employing more teachers was also likely a factor.

But all of AFT’s politicking won’t matter if it doesn’t reverse its rank-and-file declines and address its long-term problem of convincing teachers and other school employees to pay into its coffers if the U.S. Supreme Court ends compulsory dues, as many expect it to do. The union has spent the past few years expanding into healthcare and general government operations in order to diversify its rank-and-file. But that hasn’t worked out all that well. So the union has had to go back to pouring money into unionizing new members (and getting monopolies on workplace bargaining for decades to come) through the various “organizing projects it runs with help of its units.

In New Orleans, AFT poured $387,926 into the charter school teacher unionizing effort it runs with its Crescent City local in 2016-2017. That’s 32 percent more than it gave to the project in the previous period. Altogether, AFT has poured $739,219 into its organizing effort with United Teachers New Orleans over the past three years. Whether AFT is making inroads in New Orleans, where charters are the primary schools children attend, is a different matter. While the union was able to unionize Lusher Charter School in the city’s Uptown section, as well as four other schools in the past two years, most teachers in the city’s charters are still out of its grasp.

AFT also poured $608,419 into the California Organizing Project it runs with the state affiliate, 34 percent more than it gave in 2015-2016. Much of the work it has been doing has been in the state’s wealthy communities surround the Silicon Valley. [The union also poured $31,038 into its effort to organize charter school staffs in Los Angeles.] Another big push by the union is in New Mexico, where it is working to organize teachers and other employees in prekindergarten programs run by districts as well as privately-run preschools. AFT poured $356,042 into the Land of Enchantment project, slightly more than it devoted to the effort in 2015-2016. Colorado, the union devoted $55,561 to the organizing project there in 2016-2017, slightly less than in the previous fiscal year.

Looking to shore up its position in the American Midwest, AFT poured $581,675 into its Great Lakes Organizing Project last fiscal year, 26 percent more tan in the previous period; the union also poured $276,281 regional office. AFT also put big bets on Texas, a red state whose growing Latino and Asian populations offer it hope for future unionizing. It poured $1.3 million into several organizing projects in the Lone Star State, including one focused on Houston’s growing suburbs, in 2016-2017. That’s an 18 percent increase over spending in the previous fiscal period.

But AFT is skipping out on some places. In Florida, where the union shares control of the Florida Education Association with NEA, it gave just $122,771 to its four organizing initiatives there in 2016-2017, less than half the amount devoted in the previous period. Despite the growing numbers of Latino and other minority communities in the Sunshine State, the fact that many of those potential teachers will end up with the NEA side of the affiliate likely makes additional spending not worth doing.

Given the likely future prospects of compulsory dues coming to an end, AFT will have to find new ways to bring more teachers into its fold. Especially since those six-figure salaries don’t pay for themselves.

You can check out the data yourself by checking out the HTML and PDF versions of the AFT’s latest financial report, or by visiting the Department of Labor’s Web site. Also check out Dropout Nation‘s Teachers Union Money Report, for this and previous reports on AFT and NEA spending.

Organizing to Do Better for Children