RiShawn Biddle
Comments Off on Protect Our Immigrant Children

As you already know, the Trump Administration has declared open war on undocumented immigrant children and their families, as well as the 5.9 million native-born children of emigres to this country who fled economic despair, political oppression and violent crime. For the school reform movement, it is another reminder of why we must fight harder to oppose what the regime is doing (and plans to do) to our most-vulnerable children and their families.

President Donald Trump made clear his bigotry toward Latino children (as well as his contempt for the rule of law) last Friday night when when he pardoned former Maricopa County (Ariz.) Sheriff Joe Arpaio. The disgraced law enforcement official, whose long list of misdeeds includes failing to investigate alleged sexual assaults of undocumented emigres (including the molestation of 32 children), was convicted this month of contempt of court for violating a federal court order to stop discriminatory profiling of Latinos (including those native-born and undocumented who had no criminal record) to ascertain their citizenship status.

By pardoning Arpaio, Trump gives rogue cops and police departments the carte blanche to engage in criminal abuse of immigrants as well as blessed all kinds of police brutality and other violations of civil liberties of all Americans. Given the wide criticism he received over the last two weeks for failing to condemn White Supremacists who committed murder and mayhem earlier this month in Charlottesville, Va., the pardon is also a clear sign of where his administration stands when it comes to the federal role of protecting the civil rights of poor and minority communities.

Arpaio’s pardon comes on the heels of new reports that the Department of Homeland Security’s Immigration and Custom Enforcement agents are engaging in all kinds of roguery. 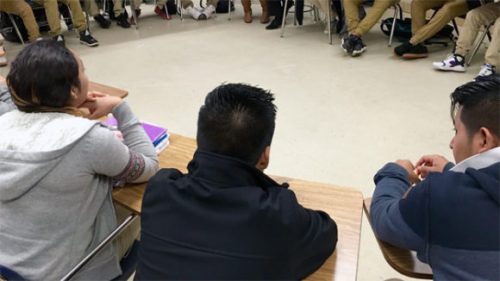 Earlier this month, the American Civil Liberties Union revealed in a lawsuit on behalf of three undocumented immigrant youth that the federal agency is teaming up with police departments (including the 250 law enforcement agencies operated by traditional district schools) to pick up, detain, and ultimately, deport unaccompanied refugee children and other undocumented minors. The children, already vetted by other federal agencies, are supposed to be turned over to their parents or to the Department of Health and Human Services. Instead, ICE is violating federal law by placing them in detention centers halfway across the country from where they live, putting them in danger of being molested and assaulted.

In the particular case being represented by the ACLU, ICE teamed up with Suffolk County, N.Y., police officers to pick up three unaccompanied refugees from Honduras and El Salvador attending high school in New York’s Brentwood district for allegedly being members of the MS-13 gang. ICE agents and Suffolk County cops have proclaimed in court that the children admitted gang affiliation even though they have been unable to provide any physical evidence or corroboration.The Brentwood district allegedly conspired with ICE and Suffolk County cops by suspending students who were suspiciously picked up for deportation days later.

Through ICE, the Trump Administration has attempted to pry data from districts in order to conduct their operations as well as standing outside schools so they can pick up kids and parents entering schoolhouse doors. Such data is prohibited from being disclosed to ICE by the Family Educational Rights and Privacy Act, the law governing the release of school data, but district staffers aren’t always aware of this. As a result of the tactics, traditional districts are issuing guidance to school leaders and others to not release any data.

Meanwhile the Trump Administration has taken particular aim at “border children” from Honduras, El Salvador, and Guatemala who fled to this country to escape violence. Two weeks ago, Homeland Security canceled the Central American Minors Parole, which allowed 3,000 such kids to remain in the country. This will likely lead to those kids, some as young as 11, to be deported, and shortchanging them of schooling they need and deserve. The move by ICE this month to deport Lizandro Claros-Saravia, who was set to attend Louisberg College on a partial athletic scholarship, shows that collegians who are destined to contribute greatly to America’s economy and society, will also be shown the door.

Things will likely get worse for immigrant children will likely in the next few months if the Trump Administration moves to end Deferred Action for Childhood Arrivals, the initiative started under the Obama Administration to exempt emigres brought to the country as children from deportation. Some 760,000 children and young adults ages nine and older are protected under DACA. This includes 100 Teach for America recruits who are working in the nation’s traditional public and public charter schools. 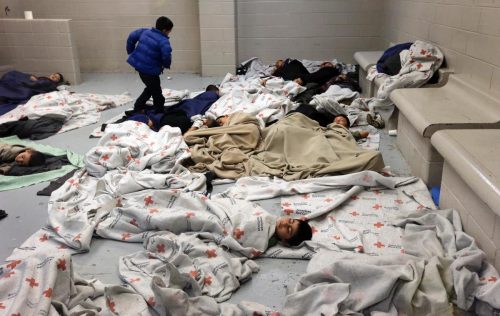 If Trump goes ahead and ends DACA, as many expect, children in elementary, secondary, and schools of higher education will be tossed out of the country when they should be learning and ultimately becoming the nation’s future leaders and builders of its economy. It also means that teachers who are improving the quality of education for poor and minority children will also end up being deported, harming the futures of the children they serve.

As it is, the Trump Administration has already begun targeting DACA emigres for deportation. This has resulted in even more allegations of roguery by ICE agents. In the case of Riccy Enriquez Perdom, who was briefly detained last week and then released after public outcry, ICE agents allegedly told her that her DACA status had expired even though it had been renewed seven months ago.

The consequences for children of undocumented emigres and those kids who are undocumented themselves can already be seen in our schools. As the New Yorker detailed back in March, children are skipping school out of fear that their parents and themselves may end up detained and deported, or, in the case of native-born children, end up in the nation’s child welfare systems. Those kids whose parents are rounded for deportation suffer dramatically; on average, the household of those children, whose parents were working, paying taxes, and contributing to communities, declined by 50 percent, according to a 2014 study by Robert Warren and Donald Kerwin of the Center for Migration Studies.

It is almost impossible for children to learn and gain the knowledge they need for brighter futures if they are in conditions of instability and poverty caused by government action.

That many undocumented immigrant children (along with their families) came to this country to find safety, political oppression and economic stability makes the efforts of Trump Administration to get rid of them even crueler than it first appears. Given that they are undocumented because of the nation’s broken immigration system (whose quotas are a legacy of the racial bigotry against earlier generations of Latinos, Jews, Irish and Chinese emigres), and that most have never committed a felony, the administration’s effort is  arbitrary, capricious, and unconscionable.

But the problem for undocumented immigrant youth extends beyond losing out on teaching and learning. Once picked up for deportation, a child is ensnared in an overwhelmed immigration court system that offers them no opportunities for due process. 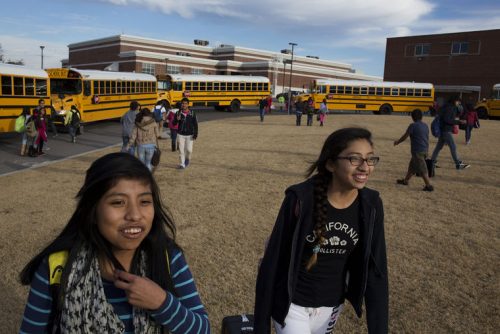 The end of the day at Albertville Middle School. Statistics say the student body is 30% latino, but teachers think its higher. Many students were taken out of school when Alabama’s immigration laws were passed.

Judges aren’t required to give an undocumented immigrant child a lawyer who help them obtain a fair trial; 34 percent of the 56,663 children in immigration court in the 2013-2014 fiscal year had no lawyer representing them. When kids aren’t represented by lawyers, they are more-likely to be deported or placed in detention than those who aren’t; 68 percent of undocumented immigrant children without lawyers were ordered out of the country in 2013-2014, compared to just 6.1 percent of those with lawyers.

Even worse is what can happen to those children if they detained end up in detention centers (prisons and jails) in which sexual and other forms of criminal abuse is rampant. The likelihood of those abuses being addressed or even being reported is abysmally low. Homeland Security’s Office of Inspector General investigated a mere 570 of the 33,126 allegations of abuse lodged by undocumented emigres in detention centers between 2010 and 2016, according to Community Initiatives for Visiting Immigrants in Confinement. Given that ICE is now looking to destroy documentation of such complaints, the likelihood of even more abuse is greater than ever.

This discrimination against undocumented immigrant children and native-born progeny of undocumented Americans (as well as against their families) is that it is based on an intellectually indefensible and absolutely immoral premise: That immigrants are a scourge to the nation. This thinking, almost as old as the racialism that is America’s Original Sin (and has often intertwined with racism to detrimental effect on generations of poor and minority children), continues to be embraced by the Trump Administration, many Congressional Republican leaders, and their supporters despite the overwhelming evidence that immigrants contribute greatly to this country’s economy and society. [The fact that Trump, along with nearly all of his staffers, are the descendants of emigres of the last two centuries, makes their nativism hypocritical.]

The good news is that some reformers have already stepped out to demand that the Trump Administration keep DACA in place. This includes Chiefs for Change, which issued a public call today asking for retain protections for undocumented immigrant children, as well as former U.S. Secretary of Education John King (who called out the administration in a speech last week to a group of school leaders. But reformers can do more.

One step lies in working with districts and school operators to help them give sanctuary to the undocumented. Districts such as Chicago have already taken these steps, refusing to cooperate with ICE and other law enforcement agencies in their deportation efforts. But those districts need help. The movement can reach out to immigration reform groups and others to develop ways to help those families evade deportation; this includes running bus services that can transport children from homes to schools without endangering their families, as well as work with community groups such as San Francisco’s Arriba Juntos to provide schooling to those in fear of appearing in schools.

The longer-term step starts with supporting immigration reform efforts on overhauling the nation’s immigration system. Certainly reformers can’t help in directly crafting policy. But they can help give political support by simply signing on to letters, teaming up on advocacy efforts that advance both immigration and school reform.

Meanwhile school reformers can work on eliminating the presence of police officers in schools. Besides the documented evidence that the presence of law enforces leads to overuse of harsh school discipline and exacerbates the school-to-prison pipeline, they can also end up being used by ICE as tools to identify and deport undocumented immigrant children and their families. As a result, getting cops out of schools helps improve school cultures for all children.

The Trump Administration has once again made clear its policy agenda of harming the futures of poor and minority children. As reformers, we must make sure it fails in its immoral goal.