RiShawn Biddle
Comments Off on Remember the Monica Queens

Her name was Monica Queen. We know little about her. Because we weren’t supposed to know her. Or the other Black people that came before or after.

Rectifying that legacy of America’s Original Sin of racialism, which has become the focal point of the debate over the removal of Confederate statues after the terrorism in Charlottesville, is as much a part of reforming American public education as building brighter futures for all children.

Thanks to the U.S. Census done in 1870, we know Monica was Black. We also know she lived in Anne Arundel County, Md., when she was 10-years old.

We know Monica had a mother and father. Their names were William and Susan. Her father was a farmer, probably one of many sharecropping after the end of the Civil War. He was 37 at the time the census was taken. Monica’s mother was two years older than her father.

She had three siblings, two brothers named John and Charles. She also had a sister. Her name was Miranda. All three were younger than her. But we don’t know if Monica was the oldest — and given that mortality rates were even higher for African Americans than for Whites, she may have not been.

Chances are that Monica was born into slavery. But given that the Old Line State had an equal number of freed and enslaved African Americans by the time she was born — a year before the Civil War — it is also possible that she was born free. But we won’t ever likely know.

Both Prince George’s County and Anne Arundel County only have birth and death records going back to 1898, long after Monica’s days on this earth. Records from circuit courts, which date from between 1865 to 1884, don’t account for all births because people weren’t required to report them, and neither do many churches (which did record births in the 19th century). 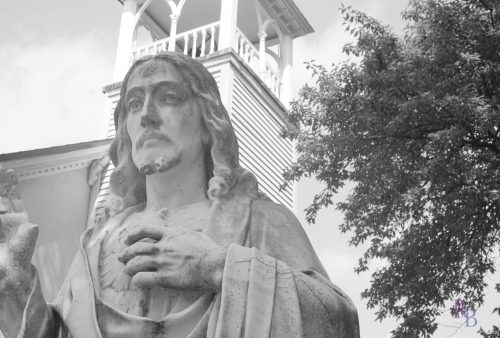 Sacred Heart Church, the birthplace of Catholicism in America, is also part of the immoral legacy of the nation’s Original Sin, with slaves buried without markers on its grounds.

But that’s only if Monica was free. If she was born a slave (more likely given that she doesn’t appear on the census of freed people taken a decade before), she didn’t even have a birth certificate. This is because enslaved Africans, being considered property and less than human under the laws of the United States and the State of Maryland, weren’t thought  worthy of such accounting.

Sometimes their first names — since they weren’t deemed worthy of having surnames — were accounted for by slave masters in various deeds, wills disposing of them to relatives, and other documents. But much of those bits of evidence have either been lost, burned, or hidden among all the other records in various archives.

The U.S. Census did account for slaves in a separate schedule in order to count at three slaves as one person; after all, each slave was considered three-fifths of a person in order to keep southern states such as Maryland from counting those they enslaved (and denied the right to vote) as people for political power. But those records also provide little other than first names. Because Black people like Monica Queen and her family weren’t considered people under law.

We know nothing about what happened to Monica in the intervening years. We don’t know if she ever fell in love, or had a beau, or even had a chance to have one. We do know that Monica died on October 9,1889, a Wednesday. But we don’t from what disease or ailment or accident she succumbed.

All we know is that after she died, Monica was buried in a far-off corner of Sacred Heart Church in Bowie, Md., far away from the graves of the White families who were its parishioners. 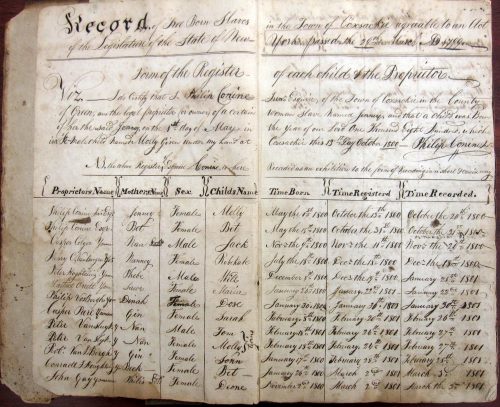 Enslaved Black people were given so little consideration that few recorded their existence. They were never supposed to be known as people.

Monica isn’t the only Black person buried on the Sacred Heart grounds. There are also the unmarked graves of slaves owned by Jesuit priests who ran the church and White Marsh, the Catholic Church plantation that once surrounded it. Even as the clerics heard confessions from the White families who lived in the community, started what is now Georgetown University, and began to build up what became the first diocese in the United States thanks to the elevation of John Carroll as bishop in 1790, they also profited, both personally and as members of the Catholic order, from the labors of enslaved Africans who were human being just like them.

Many of the White Marsh slaves would be sold off in 1838, both to satisfy the demands of Rome (which no longer wanted any part of the immorality) and to keep Georgetown afloat. Those that died before then are buried somewhere on the Sacred Heart grounds. Somewhere because, save for occasional mentions in journals and various records for financial purposes, the Jesuits didn’t think enough of the people they held in bondage to mark their existence on earth.

With 154 of those former plantation acres now being sold by the Jesuits to a developer, Elm Street, to be developed into homes, there is good chance that those graves will disappear.

What we don’t know about Monica or about the former slaves, and why that has come to pass, should be kept in mind by school reformers and others as the nation engages in the debate over the removal of statues to Confederate War dead as well as in dealing with how the legacies of America’s Original Sin perpetuate the public education systems that serve all of our children.

Contrary to the arguments of President Donald Trump and others who want to preserve Confederate statues, these objects were erected solely to erase the dark reality that people were fighting to secede from the union in order to keep people like Monica Queen in bondage. Those hunks of stone and metal were also part of a century-long campaign to render them and their descendants invisible, to declare their achievements unremarkable, and to forget that their talents and other contributions were to the overwhelming benefit of generations of White people. 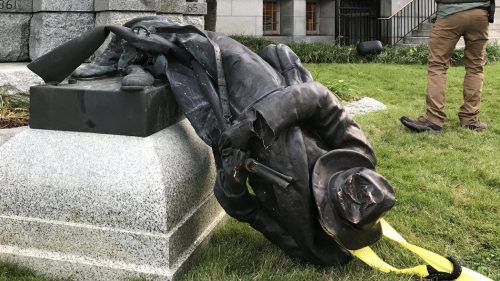 It is high time for all the Confederate statues, tools of propaganda for covering up the immorality of slavery and Jim Crow segregation, to come down.

Over the decades, that campaign to cover up the evils of slavery (and erase the memories of Black people like Monica Queen) were at least partly successful in seeping into American public education. This includes the 188 schools (as of 2015) named after Confederate leaders that served nearly 200,000 children, many of whom are the descendants of enslaved Africans. It also includes state-approved textbooks influenced by so-called “Lost Cause” historians that conveniently ignored the overwhelming evidence that the Civil War was fought to preserve slavery (and not “states rights”).

Certainly the effort to remove the Confederate statues and names from public schools is part of the long-overdue admission that we have indulged a false narrative about the nation’s past, one that keeps us from bending the arc of history towards progress for every American. It is also an important step in providing all children with a thorough education about their nation that includes the bad and ugly alongside the good and honorable.

At the same time, removing those propaganda tools of racism is a redress to those owed more than can ever be repaid.

The creditors include the descendants of enslaved Africans who live today. They have been forced for far too long to pay for those statues and schools through their tax dollars, as well as deal with the legacies of state-sponsored racism that perpetuate themselves through public education and criminal justice systems.

But it isn’t just about the statues themselves. For far too long, Black people have been forced to accept and expect erasure, and denied knowledge of those who came before them. After all, unless they are descendants of Founding Father Thomas Jefferson’s slave (and likely sister-in-law) Sally Hemmings, few African Americans can trace their Black ancestry beyond the 1870 census or, as in the case of your editor, before 1830, when a man named Samson would appear on the rolls of a slave owner in Virginia.

Removing the statues is just another step towards celebrating those who came before them. The next step includes building statues of heroes such as Nat Turner and religious leader Richard Allen, as well as commemorating the contributions of enslaved Africans and others whose ordinary lives were just as heroic.

The other creditors are the enslaved and oppressed Black people of the past, who cannot collect on the debt, but deserve repayment anyway. Reimbursement for the torture, rape, murder, and denial of liberty done to them during their lives. Refund for being denied the ability to register the births of their children and put memorials on the graves of their loved ones. Payback for the memories they had lost forever to the ages because they weren’t considered human beings.

Restoration of their proper places as builders of the nation is the least we can do.

The final creditors are the Black children of today who are like what Monica Queen was at age 10 — and for whom we want futures better than what Monica had. For reformers, this means the transformation of American public education so that they (as well as all children) are provided high-quality education. It means building upon the implementation of Common Core’s reading and math standards by using original sources (including the records on slavery) to expand the minds of every child. This also includes overhauling the history lessons taught so that they know all that truly happened in this nation, especially to their ancestors.

And yes, it means renaming every school named for those evil Confederate leaders who wanted to keep our Black children in bondage. We would never send Jewish children to schools named after Heinrich Himmler. We shouldn’t be doing the same kind of thing to Black children.

Monica Queen deserved more in life than she ever got. Now we have a chance to make her name — as well as the names of every enslaved Black American — known and properly recorded for history. Even when we know just a little about them.