RiShawn Biddle
Comments Off on School Reform’s Time for Choosing

When will Eva Moskowitz disavow her association with the Trump Administration? That is a question. When will Betsy DeVos resign as Secretary of Education? That is also a question. Will other reformers join Teach For America’s Elisa Villanueva Beard, former Secretaries of Education John King and Arne Duncan, and Democrats for Education Reform President Shavar Jeffries and call out the President of the United States for his bigotry? That question also lurks at the surface.

But the biggest question of all for school reformers who have defended working with this regime in any way is this: What will they do now after the current occupant of the White House made clear yesterday that he is an ally of bigot who want to harm the futures of poor and minority children? After Donald Trump’s defense of Neo-Nazis and White Supremacists, now is what Ronald Reagan would call a time for choosing. All reformers must choose morally and wisely if they want to truly be champions for all children.

As you already know, the demagogue who occupies 1600 Pennsylvania Avenue doubled down on a false contention he made three days earlier that White Supremacists participating in last week’s terrorism in Charlottesville, Va. were only partly responsible for the violence that resulted.

The president ignored the facts: Unite the Right participant James Alex Fields’ hit-and-run murder of 32-year-old Heather Heyer and injuring of other protesters. The assaults and other thuggery by other Neo-Nazis during the mayhem, including the beatdown of Deandre Harris in a parking garage. The evidence that the White Supremacists came to town with arsenals of guns and other weapons. The presence of White Supremacists and militiamen menacingly walking around with semi-automatic weapons in full view. Gun-toting bigots threatening a local synagogue. Instead, Trump went on a tirade that included comparing peaceful civil rights and Black Lives Matter activists to the violent bigots, as well as proclaiming that some of the United the Right protesters were “very fine people”. 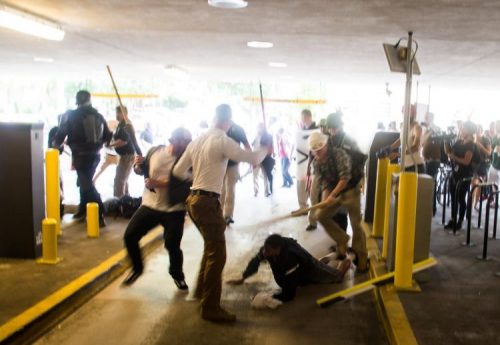 The “very nice” bigots Trump talked about beat Deandre Harris during their protests — and murdered a woman as well.

Trump also claimed that the nighttime tiki torch-lit march held by the Unite the Right protesters the night before the rampage — a spectacle reminiscent of Klu Klux Klan rallies and Nazi Party rallies on the Nuremberg parade grounds — as “quiet” and peaceful. As his want, he failed to mention the overwhelming videotaped evidence that the bigots chanted “Death to Jews”, shouted homophobic slurs, loudly declared that White people wouldn’t be “left behind”, and surrounded a Black church where Black Lives Matter activists and others were preparing their counter-protests.

He went even further by expressing his opposition to efforts by civil rights activists and others to remove statues of Confederate leaders such as Robert E. Lee (whose statue in Charlottesville has been targeted for removal by city officials). Why? Because he believes that removing the statues of men who committed treason against this country in order to preserve slavery and oppression was akin to erasing the memory of Founding Fathers such as George Washington, who promoted the ideals of liberty and freedom despite their own moral failings in regards to Black people.

There has been plenty of outrage and condemnations of Trump’s latest statements. But let’s be clear: Nothing is shocking about Trump’s defense of bigotry. This is because he is a bigot himself.

Ever since he began his eventually successful campaign for president, Donald Trump has racked up a long and ignominious record of race-baiting, rank demagoguery and blunt anti-Semitism. This includes accusing Mexican immigrants, undocumented and legal, of being “rapists”; embracing conspiratorial rhetoric from the notorious Protocols of the Elders of Zion in a speech given a month before his victory; denigrating the family of a dead soldier who was also a Muslim; and accusing Gonzalo Curiel, a federal judge presiding over a case involving one of his business of being biased against him because of his Mexican heritage. 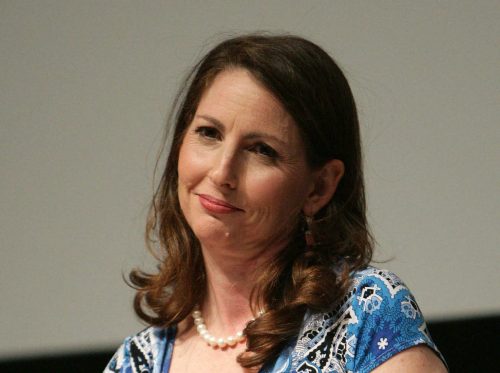 Success Academy’s Eva Moskowitz is among the reformers who must answer for their association with (or silence about) the Trump regime.

Since taking office, Trump has indulged his bigotry, often with the help of his appointees. This includes the executive orders banning Muslims from several countries from entering the country; to the repeal of the Obama Administration’s executive order requiring traditional districts and other public school operators to allow transgendered children to use bathrooms of the sex with which they identify; to the round-ups and deportations of undocumented immigrants who contribute greatly to the nation’s economy.

The president has also refused to back down from his nativist rhetoric. Last month, at a speech in Youngstown, Ohio, Trump took a page out of the bigoted white slavery rhetoric of a century ago by claiming that Mexican emigres were animals who wanted to take young women and “slice them and dice them with a knife because they want them to go through excruciating pain before they die.”

Given his political record, his proud association with bigots — including Breitbart publisher and campaign manager-turned chief adviser Steve Bannon — and the laundry list of alleged racism that dates back to his days running his father’s real estate empire, there is nothing new about Trump’s defense of bigotry. No one should be shocked at this point. Because he has never been dishonest about his immorality. 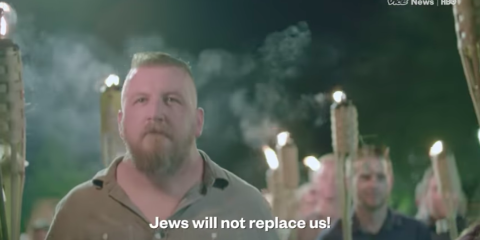 The real question lies with how all of us, especially for those in the school reform movement, will deal with Trump now. This matters because everything we do will be viewed now and in the future through how we confront him.

Certainly there have been plenty of reformers who have called out Trump’s bigotry and rank immorality. Jeffries, King, Duncan, along with Teach For America’s Elisa Villanueva Beard, Jonas Chartock of Leading Educators and charter school leaders such as Richard Barth of KIPP have admirably and consistently opposed the Trump Administration’s agenda. Michael Petrilli of the Thomas B. Fordham Institute also wrote a rather touching piece on Monday that excoriated the bigotry, and announced today that he would no longer be a registered Republican.

But far too often, conservative reformers, school choice advocates and others within the movement have been silent in the face of the administration’s bigotry. The usually-voluble American Enterprise Institute education policy boss Frederick (Rick) Hess, who took time out of his day last month to rip apart a rather demagogic screed about school choice and racism from the usually-sensible (and pro-reform) Center for American Progress, has remained quiet about Trump’s rhetoric. So has Jeanne Allen of Center for Education Reform, who called out American Federation of Teachers President Randi Weingarten’s equally rank demagoguery about choice. 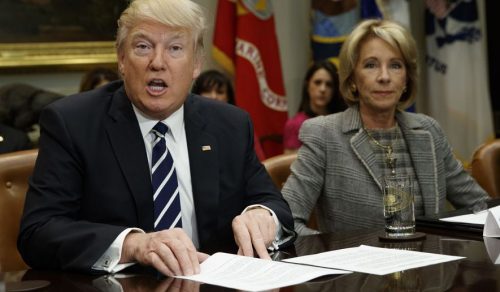 U.S. Secretary of Education Betsy DeVos (on right) is one of the reformers who have betrayed their commitment to children by joining common cause with Trump.

Others have been active collaborators with the regime itself. This includes DeVos, who continues to sully her once-stellar reputation as an advocate for expanding school choice for poor and minority children by serving as the president’s education czar, and former 50CAN executive Jason Botel, who serves directly under her. [DeVos further debased herself by refusing to specifically call out Neo-Nazis and White Supremacists in her statement on the events in Charlottesville.]

Then there is Success Academy’s Moskowitz, whose schools serve mostly Black and Latino children. Early on after Trump’s victory, she volunteered early on to work with his administration. Her refusal to distance herself from the regime (along with troubling penchant of Success Academy’s schools to overuse harsh traditional school discipline) is a likely reason why Jeffries resigned from the charter school operator’s board last month.

Before yesterday, those folks could offer up excuses for why they collaborate with the Trump Administration or remain silent about its bigotry. Among them: Because working with the administration can help poor and minority children access high-quality education; and because it is an opportunity to serve their country and not actively support the intent of the administration to do harm to communities black and brown; that Trump’s bigotry has nothing to do with their work on education policy and practice. 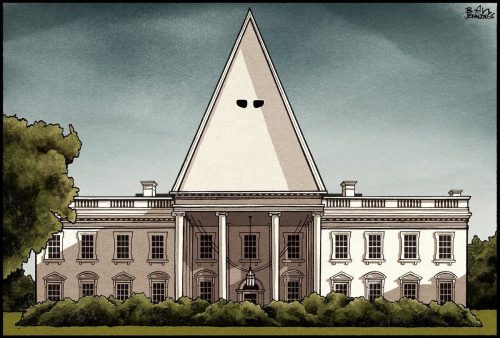 This Guardian cartoon has it right.

The excuses were specious — and after the past seven months — incredible even before Trump opened his mouth about Charlottesville for a third time. But now, after he defended bigotry in such a way that brought cheers from demagogues such as former Klu Klux Klan Grand Wizard David Duke, there are no more excuses for silence or collaboration.

As champions for brighter futures for all children, reformers can never tolerate or accept bigotry, state-sanctioned or otherwise. As defenders of the most-vulnerable, reformers cannot stay silent in the face of credible threats to their well-being. As Children of God and members of the Family of Man, reformers cannot sit idly by as an elected official, especially the Leader of the Free World, bloviates, obfuscates, and gives comfort to bigots at expense of our fellow human beings. As Elie Weisel would say, silence is complicity with immorality — and active support of bigoted regimes is immorality itself.

Certainly Archbishop Charles Caput of Philadelphia is right to say that racism (along with other form of bigotry) is “a poison of the soul” that cannot simply be overcome with condemnations alone. Transforming American public education, whose failures, deliberate and otherwise, have condemned the lives of Black and Brown children, is part of draining that pernicious tribalism. But condemnation and active disassociation with those who want to harm our children are two important steps towards that goal.

If reformers can take time out to castigate traditionalists like Weingarten for their sophistry, they can surely muster a few words to call out President Trump for being a White Supremacist and rank demagogue. More importantly, for those working for and with the administration, it is time to walk away from the regime and end all meaningful association with it. Repentance is good for their souls — and for the futures of all children.