Earlier today, Dropout Nation reported on the American Federation of Teachers’ 2015-2016 financial disclosure to the U.S. Department of Labor. As you would expect, the nation’s second-largest teachers’ union spent big on influencing Democratic presidential nominee Hillary Clinton and her apparatchiks, as well as pouring heavily into what should be like-minded advocacy and nonprofit groups.

But AFT’s big spending doesn’t just end with political campaigns and co-opting minority as well as hardcore progressive groups. The union even spends big on its own staff and operations.

Start with AFT President Rhonda (Randi) Weingarten, whose paychecks put her in the top five percent of the nation’s income earners even as she engages in class warfare rhetoric. The union paid Weingarten $497,311 in 2015-2016, just a couple hundred dollars more than she pulled down in the previous year.

Also well-paid by the union is Loretta Johnson, who serves as its secretary-treasurer; her $358,225 in 2015-2016 was a grand or so higher than in the previous year. Meanwhile Mary Catherine Ricker, the former Saint Paul Federation of Teachers boss who now serves as the union’s number two (and in the process, serving as an obstacle to United Federation of Teachers boss Michael Mulgrew’s ambitions to succeed Weingarten as head of the national union), was paid $311,311, a 5.4 percent increase over her pay in 2014-2015.

Altogether, the AFT’s top three leaders collected $1.2 million last fiscal year, a slight increase over the $1.1 million paid to them by the union in 2014-2015.

Also making bank are AFT’s staffers, though there are slightly fewer of them this time around. Two hundred twenty-two staffers earned more than $100,000 in 2015-2016, seven fewer than the 229 in the previous year. Three out of every five staffers at AFT national headquarters earn six-figure sums. Among the union’s high-paid mandarins: Michelle Ringuette, the former Service Employees International Union staffer who is now Weingarten’s top assistant, made $230,736, while Michael Powell, who serves as Weingarten’s mouthpiece, earned $240,647. Kristor Cowan, the AFT’s chief lobbyist, earned $186,293, while Kombiz Lavasany, another operative who oversees Weingarten’s money manager enemies’ list, earned $184,158.

Supporting these high salaries is an ever-declining rank-and-file base. AFT counts 675,902 full-time rank-and-filers on its roster in 2015-2016, a 3.4 percent decline over the 699,739 members on the roster in the previous fiscal year. [Dropout Nation does not call them members because in  nearly every case, AFT and its affiliates use state laws to force teachers to join.] This marks the third straight year of declines and the fifth year of decline within the past six.

The union also experienced a 1.5 percent decrease in the number of half-time rank-and-filers (or school employees making less than $18,000 a year); a seven percent decline in one-quarter rank-and-filers (nurses and state government employees whose unions are affiliated with AFT); and a 2.7 percent decline in the number of one-eighth rank-and-filers. Seems like the union’s once-successful effort to strike affiliation deals with nursing and other government employee unions, an effort that put it in competition with the much-larger Service Employees International Union, has fallen to seed.

Even worse for AFT: Its effort to increase the number of so-called associate members who pay directly into national’s coffers, continues to be in free-fall. AFT counts just 49,984 such members on its rolls in 2015-2016, a 14.5 percent decline over the previous year. This shouldn’t be shocking. After all, AFT cannot provide associate members any real assistance in terms of negotiating teachers’ contracts or addressing work rules. Besides, the associate members can’t even vote in union elections.

As a result of these declines, AFT’s counts just 1.5 million rank-and-filers and voluntary members, a 4.3 percent decrease over the previous year. 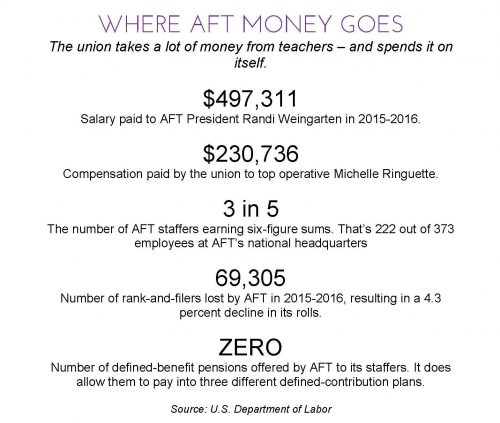 The good news for AFT is that the death of U.S. Supreme Court Associate Justice Antonin Scalia earlier this year assured that there was a tie vote on Friedrichs vs. California Teachers Association; his vote would have likely led to the overturn of Abood v. Detroit Board of Education, the five-decade-old ruling that gives AFT the ability to compel teachers pay dues regardless of their desire for membership. As your editor noted two years ago, the end of compulsory dues laws could cost AFT 25 percent of its membership and $36 million in revenue (based on 2012-2013 numbers), a hit for which the union isn’t likely ready to address.

The other good news for AFT is that it hasn’t affected revenue. The $192 million in dues and other agency fees (in the form of a so-called per-capita tax collected from locals and affiliates) generated by the union in 2015-2016 is 21 percent higher than in the previous fiscal year. AFT’s overall revenue of $328 million (including loan proceeds) is unchanged from 2014-2015.

This time around, the union didn’t have to borrow as heavily as it has in previous years to keep operations afloat; it borrowed just $55 million in 2015-2016, half the level of borrowing in the previous year. Overall, the union has borrowed $477 million over the past five years. The union did sell more of its investments in order to make due; the union sold $29 million of its portfolio in 2015-2016, more than double the investment sales in the previous year. Without the loans and investment sales, AFT’s revenues were just $244 million, a 15 percent increase over levels in 2014-2015.

But the bad news is that AFT may still lose revenue. One reason: The abolishing of collective bargaining and forced dues collections in Wisconsin, Tennessee, and Michigan. This has resulted in AFT losing teachers who realize that they don’t have to pay into unions that don’t represent their interests.

Another problem for the union: More of its affiliates and locals are either merging with those of the National Education Association or striking affiliation agreements with it. Membership declines forcing such mergers is one reason. But as seen in California, where the AFT’s United Teachers Los Angeles has struck a joint affiliation deal with NEA, the AFT’s larger locals are realizing that such triangulation gives them stronger influence over education policy at state and local levels.

But the gains for the big locals (who honestly don’t need AFT affiliation anyway) means both lost revenue for AFT as well as the ability to keep locals from straying away from the party line. [There’s also that pesky matter of being forced into a merger with NEA, a matter long-discussed among hard-core traditionalists.] Given the rancor from AFT rank-and-filers over strong-arm moves by national to remove wayward leaders in locals such as Detroit, expect more large locals to strike joint affiliation agreements or even break away from the national union in the near-future.

The consequences of efforts to abolish collective bargaining and joint affiliations by locals don’t just hurt AFT’s ability to use money to preserve influence. It also harms its ability to pay for the high costs of employing so many six-figure staffers.

While benefit costs have barely budged (remaining at $17 million), AFT’s general overhead costs increased by 4.8 percent within the past year. The good news for AFT is that it was able to offset some of those expenses with a 10.8 percent decrease in so-called union administration expenses. Meanwhile AFT’s post-retirement obligations increased by six percent (to $38 million) in the past year.

Luckily for the AFT, its staffers and leaders pay into defined–contribution retirement plans used by the rest of the private and nonprofit sectors. A funny thing given its opposition to efforts by school reformers and others to move away from the virtually-insolvent defined-benefit pensions championed by Weingarten and the union. Hypocrisy is like that sometimes.

Dropout Nation will provide additional analysis of the AFT’s financial filing in the coming days. You can check out the data yourself by checking out the HTML and PDF versions of the AFT’s latest financial report, or by visiting the Department of Labor’s Web site. Also check out Dropout Nation‘s Teachers Union Money Report, for this and previous reports on AFT and NEA spending.