RiShawn Biddle
Comments Off on AFT Spends Big on Hillary

The American Federation of Teachers filed its 2015-2016 financial disclosure with the U.S. Department of Labor, and once again, the nation’s second-largest teachers’ union spent plenty of money securing its ties to Democratic presidential nominee Hillary Clinton.

The union gave $250,000 to the Bill, Hillary, and Chelsea Clinton Foundation, the controversial philanthropy run by the Clinton family that has garnered widespread scrutiny during this year’s presidential campaign for receiving donations from corporations and foreign governments that also had business before the former Secretary of State during her tenure in the Obama Administration. AFT gave another $250,000 to the Clinton Global Initiative, the other non-explicitly political wing of Clinton family’s political (and notorious influence-peddling) activities. Likely anticipating Hillary’s victory over Republican Donald Trump (as well as looking to head off further scrutiny), Clinton Global announced this month that it would shut down at year’s end. Altogether, AFT has doled out $2.2 million into Clinton-controlled nonprofits over the past four years.

As Dropout Nation has reported over the past two years, AFT has worked zealously and successfully to win influence over Clinton and position traditionalists into key roles in shaping education policy if she wins the presidency. Besides the donations, AFT has key supporters within Clinton’s political machine. Hartina Flournoy, a Democratic National Committee member who serves as former President Bill Clinton’s chief of staff, previously served as top assistant to AFT President Rhonda (Randi) Weingarten. Thanks to her longtime friendship with Hillary, Flournoy now serves as Weingarten’s key go-between. Donna Brazile, the longtime Clinton apparatchik who is now the interim boss of the Democratic National Committee (as well as co-chair of AFT front group Democrats for Public Education), is a longtime beneficiary of AFT’s largesse; her eponymous outfit collected $110,000 from the union in 2015-2015, and has collected $210,000 from AFT over the past two years.

The union even made sure to win over Ann O’Leary, a supposed reformer who is advising Clinton’s campaign on education policy, by giving $125,000 to the Opportunity Institute, an outfit she cofounded (and on whose board she sits) that focuses on early childhood education and other social policy issues. As reformers may remember, O’Leary attempted to quell the fears of the movement last year after Clinton stated to talk show host Roland Martin and at an AFT event that she opposed the expansion of public charter schools. This was music to the ears of AFT, which has long opposed school choice (and whose Big Apple local, United Federation of Teachers, failed miserably in operating charters on its own). Opportunity Institute’s directors include billionaire Tom Steyer, a key player within Democracy Alliance, the secretive progressive political action outfit to which AFT (along with the National Education Association) is a member.

Meanwhile AFT is making sure that the Democratic National Committee feels its presence. This includes handing out $300,000 to Philadelphia 2016 Host Committee, which put together July’s Democratic National Convention; the union paid $180,972 to Leah Daughtry, the chief executive of this year’s convention, through her firm, On These Things LLC, in exchange for helping the union reach black clergy and faith-based groups. AFT also gave $125,000 to the Democratic Governor’s Association, $200,000 to the Democratic Legislative Campaign Committee, and a piddling $30,000 to Democrats for Public Education.

Just because AFT has spent plenty of money influencing Hillary doesn’t mean that it lost focus on other efforts to maintain its influence. The union spent $34 million on political lobbying activities and contributions to what should be like-minded groups; this, by the way, doesn’t include politically-driven spending that can often find its way under so-called “representational activities”. This is a 19 percent decline from the same period in 2014-2015.

Co-opting progressive groups remains a key focus of its influence-buying. This included handing out $373,000 to Center for Popular Democracy and its action fund in exchange for its efforts against the expansion of public charter schools. The outfit has also been blessed with Weingarten’s presence on its board. The union also gave $60,000 to Gamaliel Foundation, which has long-served as a hub for supposedly grassroots progressive outfits; Gamaliel lists AFT as well as the union’s reliable vassal, Schott Foundation for Public Education, among its funders. 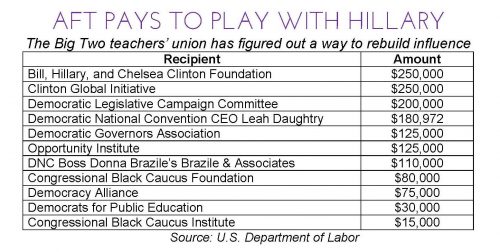 AFT gave $100,000 to Americans United for Change, and $50,000 to In the Public Interest, the latter of which worked with Center for Popular Democracy last year on a series of reports demanding “accountability” for public charter schools. The union also dropped $28,000 into Center for Media and Democracy, the parent of PR Watch; contributed $30,000 to North Star Fund (whose grantees include AFT vassal Alliance for Quality Education); and ladled $25,000 to vassal Netroots Nation.

At the same time, AFT put more money into its effort to win over black and other minority outfits. The Schott Foundation’s Opportunity to Learn Action Fund was once again a big recipient of the union’s largesse, collecting $75,000 from AFT in 2015-2016. As it has done over the past few years, Schott continues to repay AFT for its generosity by doing its bidding in defense of policies that benefit the union at the expense of the black children it proclaims to defend.

Looking to buy the voices of prominent black leaders, AFT gave $25,000 to Al Sharpton’s National Action Network (even though he remains a prominent supporter of charters) and put $10,000 into the coffers of Rev. Jesse Jackson’s Rainbow PUSH Coalition. The biggest pay day was received by media commentator Tavis Smiley, who has become better-known in recent years for teaming up with academic Cornell West in their oft-personally motivated criticisms of the Obama Administration than for his eponymous television show. AFT gave Smiley’s outfit $75,000, more than double what Sharpton and Jackson collected. Romal Tune’s Clergy Strategy Alliance also collected $52,000 in exchange for helping AFT reach black and Latino clergy.

What about the usual suspects? The union gave $250,000 to Economic Policy Institute, and put down $75,000 into the American Prospect (which, like EPI, was founded by Robert Kuttner and former Clinton Administration adviser Robert Reich). AFT also gave $25,000 through the University of Colorado Foundation to Kevin Welner’s National Education Policy Center, gave $17,500 to Committee for Education Funding, and provided $55,000 to Alliance for Quality Education. As a reminder of the AFT’s unwillingness to support efforts to elevate the teaching profession it supposedly defends, the union gave $71,410 to Council for the Accreditation of Educator Preparation, a key player in vetting the nation’s university schools of education.