A unique blend of natural and man-made resources and amenities give Rochester a quality of life that is second to none. Straddling the Genesee River between the Erie Canal and Lake Ontario, Rochester offers a natural beauty that is easily accessible by a network of parks, trails, boat launches and scenic overlooks. The city is divided into dozens of distinct neighborhoods and urban villages supported by an eclectic mix of stores and restaurants. Quality housing available at reasonable prices . . .

Rochester was once the Silicon Valley of the American Industrial Revolution; the city where technological invention took place and was applied to advanced products distributed around the world.  Think of Kodak.  Think of Xerox. And today we think of it as a city where “quality housing [is] available at reasonable prices,” where generation after generation of children are pushed through their schools years, uneducated, with little chance of entering adulthood “college and career ready.”

The results of recent New York State tests show that the district is not doing its job.  The local newspaper, The Democrat and Chronicle, noted that “In Rochester, 7.2 percent of students were judged proficient in math and 6.7 percent were judged proficient in English, both the lowest marks among the Big Five,” the five largest school districts in New York State.  The newspaper went on to report that the Rochester City School District results were also outliers among surrounding districts, where proficiency rates were as high as 73 percent and averaged seven or eight times that of Rochester.

The most sensitive indicator of the success of an education system is what it does for Black male students.  If they are doing well, it is most likely that others will also be doing well.  In Rochester, they are not doing well.

According to the New York State Education Department, at grade three, just 17 (three percent) of 653 male Black students tested were proficient (levels 3 and 4) in reading.  Of these, none reached level 4. Six percent of 327 Hispanic males were proficient, only one reaching level 4.

The Rochester City School District has failed to teach 83 percent of the male Black third-graders in its care how to read as well as they should at that point and none to read as fluently as would lead later to success in school.

That is the record of early childhood education in Rochester.  There is also now on record how little the district does for these children as they “progress” through the later grades.  At grade eight, 12 (again, three percent) of 435 male Black students tested were proficient (levels 3 and 4) in reading.  Of these, just one reached level 4.  Five percent of 220 Hispanic males were proficient, none reaching level 4.

New York City is not a model school system for Black students, but, by comparison to Rochester’s, it is Phillips Exeter or Eton. 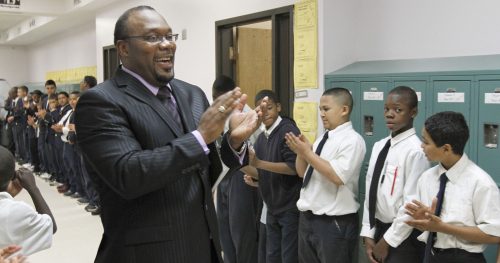 For young black and Latino men in Rochester schools such as School 9, the district is toxic to their futures.

The graduation rate for male Black students in the Rochester City Schools for 2015 was 44 percent, of whom just 3 percent had Regents diplomas, as compared to the 8 percent statewide average for the group.  If 97 percent of Rochester’s male Black students cannot read at grade level in grade 8, how is it that 44 percent are given diplomas?  Or is it that only those receiving Regents diplomas are actually “career and college ready” and the other 41 percent have received pieces of embossed paper with which to join in the streets the 56 percent who did not graduate at all?

As Dropout Nation readers already know from my last analysis of Rochester’s schools, none of this is surprising. The district’s failure to provide high-quality education to any of its children, especially young black men, is one reason why 14 of its schools are now under state receivership (and 14 more may end up in that status).

But what about the college readiness of male Black Rochester high school graduates? This can be estimated from the records of the local colleges.

As noted, not all of those graduates attended Rochester city schools. Many may have come from the surrounding suburban districts, such as that of Greece, where the new Rochester Superintendent, Barbara Deane-Williams had been Superintendent.  Shall we estimate that half of those 22 Black men graduating with Associates degrees from Monroe Community College had graduated from the Rochester City schools three years earlier? Eleven of the 690 who had been in grade 8 five (or six) years before that?

Some of these 116 Black men with local four-year college degrees may have attended Rochester City schools.  How many?  It is hard to tell, but as a matter of fact, the “Rochester Promise,” which gives generous support to graduates of Rochester schools for study at the University of Rochester awarded two scholarships this year.  That is an improvement over previous years, in which no Rochester Promise scholarships were awarded.  We know then that those two male Black students, of an eighth-grade class of 690, eventually received degrees from the University of Rochester.  Perhaps as many did so from the Rochester Institute of Technology.  Or maybe the number in each case was four.  Eight?

Given these results, especially after test data released this July, the Rochester district boasted to the Democrat and Chronicle and other media outlets that: “We have increased investments in prekindergarten, special education, a new K-2 English curriculum developed by District teachers and many other services to help close that gap… Working together with our families and the community, the district is committed to accelerating achievement for Rochester students.”

All to the good. But the Rochester district has spent decades failing to educate the children whose parents have entrusted it with their futures. It has betrayed that trust. It is time, well past time, for the state to act.

The Conversation: NAACP's War Against Charters